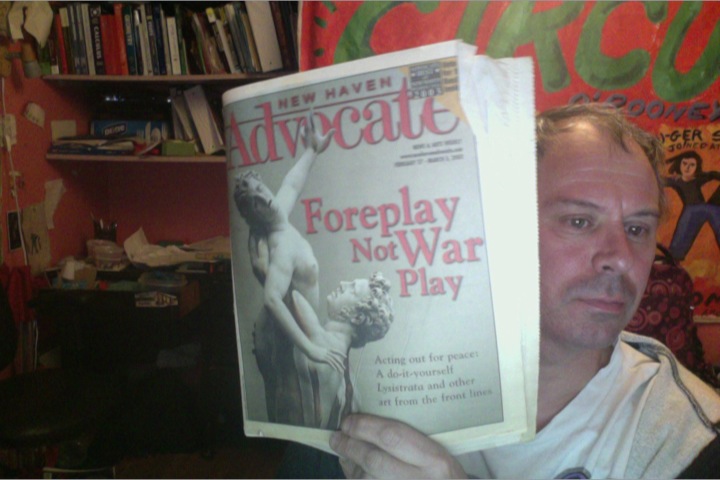 For nearly all of the last 22 years, you could regularly find my theater reviews in the pages of the New Haven Advocate.

I say “nearly,” because a falling-out with one editor led to a period of a few months a few years ago when it looked like I’d lost my main forum as a theater critic. I started this blog, and the rest is history. I was soon called back to service for the New Haven Advocate, but this site soon surpassed the notoriety I’d gained in local print publications. I was glad to have both outlets, not to mention numerous other places where I’ve been able to write freely about Connecticut theater.

Now the Advocates (New Haven Advocate, Hartford Advocate, Fairfield County Weekly) have morphed into a new publication, CTnow. CTnow relies heavily on in-house writers at the Hartford Courant, the daily paper which has owned the Advocate/Weekly chain since the mid-’90s. The Courant has a staff theater critic/reporter, Frank Rizzo. So, while it looks like I will still be contributing arts features and book/CD reviews to the CTnow website and occasionally landing in the print edition, my theater writings in particular are superfluous there.

I enjoy this blog more than any other arts journalism I do, but it’s clearly for theater junkies. I’ve always felt it important that I write about theater for general interest publications, preferably free and/or alternative ones. I had that opportunity at the Advocate for a very long time and greatly appreciate it.

Upon hearing of the CTnow changeover, I approached the New Haven Independent, the premiere news source for this city (online-only or otherwise) and asked if they had any need for what I do. They (namely Paul Bass, a cherished former Advocate colleague) did! So I’m writing theater reviews for them now. I’m also contributing a weekly “highlights” calendar of arts events, something else I’m well known for around here.

I’ve had a number of pieces published in the Independent in just the past couple of weeks:

My review of Fences at the Long Wharf Theatre is here.

My coverage of the Ming Cho Lee set-design gallery exhibit at the Yale School of Art & Architecture is here.

Expect a review of Accidental Death of an Anarchist and an overview of the fall semester at the Yale Cabaret on the site (http://www.newhavenindependent.org) in the coming week.

Strangely, I’ve also been the SUBJECT of a couple of Independent stories lately. Both are by Paul Bass. He covered the latest edition of Get to the Point!, a storytelling show I host monthly at Cafe Nine (www.scribblers.us/gttp/) here. I’m also mentioned in Paul’s thoughtful eulogy for the Advocate papers, here.

There’s another tremendous salvo to the Advocate and its peculiar and powerful brand of alt-journalism, by a guy I actually had the honor of hiring to work for the rag back in ’02, Brian LaRue. He says nice things, here.

Will I ever get around to writing anything about the Advocate myself? I think it might be better if I don’t, as a rare exercise in keeping my opinions to myself. It was enough, perhaps, to have lived in that world, and seen it change irrevocably.

Please read and support the New Haven Independent. See you there. (And here.)