The first spoken lines of the first episode of The Saint TV series in 1962, starring Roger Moore as Simon Templar:

Simon: Thank heavens for English theater bars. We’ve had two acts of this play. Complete suffering both onstage and off. I don’t know what your tastes are in theater. Maybe you like the sweat and the grunt school of acting. Me, I like to go to the theater for fun, for laughs, for excitement. Tonight… oh, brother!

Simon: Here comes the producer’s wife. What shall I say?

Madge: Oh, darling. Tell me honestly, what do you think of it?

Simon: Well, I can honestly say, Madge, that I’ve never seen anything like it in my life.

The Saint series has just been given a lavish repackaging by the expert pop culture archivists at Shout! Factory. Until now, we Saint fanatics have gotten along with the A&E-packaged “megaset” of all the series’ color episodes and two sets released much later which compromised the show’s first two black-and-white seasons. Yet there were two whole other black & white seasons in between the first two and the final (color) two. Episodes 29-71 (of 118 total) have not been available in the American DVD market until now. 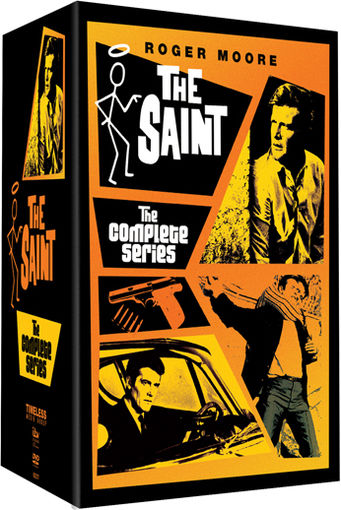 I’ve been a Saint fan all my life, and don’t honestly recall which I discovered first—the original Leslie Charteris novels (which I’ve been collecting since I was a kid, and which had their own lavish full-scale reissuing as e-books and paperbacks in 2013), the Roger Moore series (1962-1969) or the Corgi-brand toy car version of Simon Templar’s white Volvo 1800. The Saint has always been in my consciousness.

Shout! Factory’s Saint set was released at the end of May. I’m working my way slowly through the entire series in order, and haven’t yet gotten to the “lost episodes.” There’s been an unexpected bonanza of Saint rereleases (print and disk) over the past couple of years, and I couldn’t be more grateful. Besides the books and the Moore series, all six of the Saint TV movies from the late 1980s starring Simon Dutton were issued on DVD last year by Acorn Media, the first time those shows have been available (outside of bootlegs) since they were first aired. All the Saint movies from the 1930s and 1940s variously starring George Sanders, Hugh Sinclair and Louis Hayward have been available as on-demand DVD-Rs from the Warner Brothers Archive Collection for a few years now. There was also a lamentable Val Kilmer Saint film from 1997 which altered the character’s motivations and backstory for no good purpose and made Simon Templar an American grifter with a fetish for wearing disguises.

This wholesale Saint resurgence leaves out only the Return of the Saint series from the 1970s starring Ian Ogilvy. A British DVD set of that series came out in 2007 but there hasn’t yet been a “Region 1” release for American consumption.

Meanwhile, a brand new Saint TV series is apparently in the works. A pilot starring Adam Rayner apparently didn’t interest any networks, but the show’s producers are reportedly trying again with a new star and attitude.

It won’t have the old-school theatrical feel of the ‘60s series (which the Benny Hill Show memorably mocked for its use of stock travelogue footage to make it seem as if Simon Templar was in exotic locales rather than on a London soundstage), but of course I’m excited nonetheless. The Saint’s was one of the most reliable, consistently entertaining adventure characters of the 20th century. Here’s to reincarnating The Saint in the 21st.