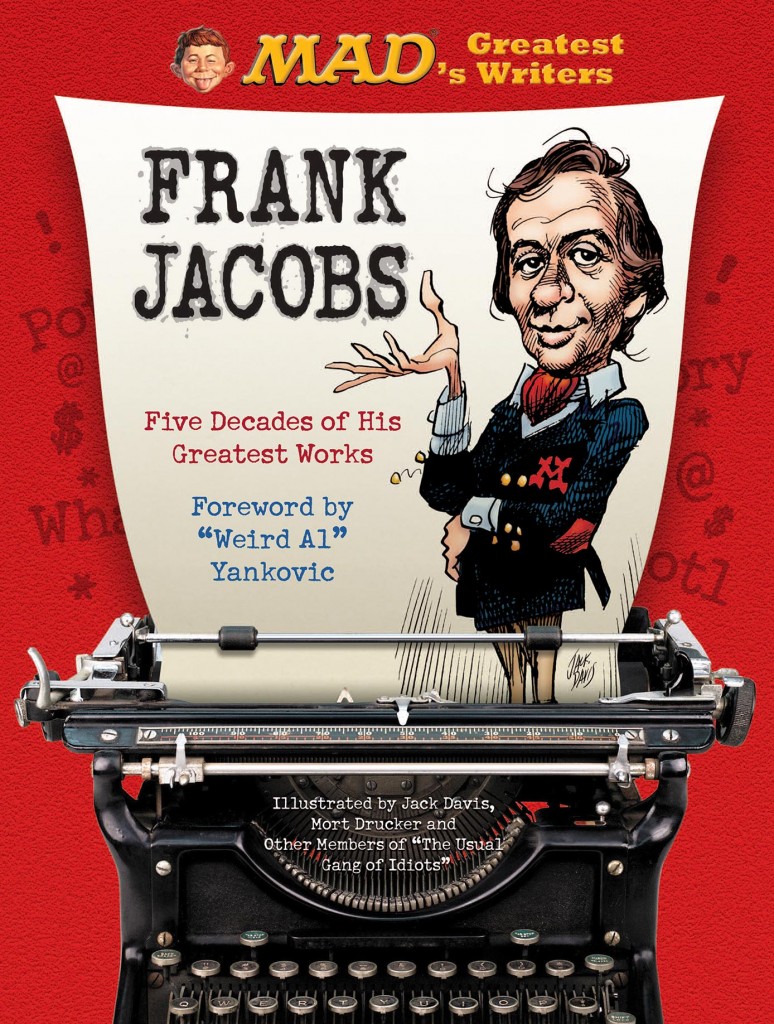 Having bestowed hardcover collections on a host of “Mad’s Greatest Artists,” the magazine finally is getting around to honoring the members of its “usual of idiots” who can’t draw. If you think about it, they should have done this sooner rather than later, since a volume devoted to a prolific Mad writer will invariably be an anthology of work illustrated by Mort Drucker, Jack Davis, Wally Wood, Bob Clark, Jack Rickard, Sergio Aragones, Paul Coker, George Woodbridge… Only Al Jaffee and Don Martin both wrote and drew most of their own stuff.

Frank Jacobs is the genius parodist and satirist whose first sale to Mad was in 1957. He still contributes the occasional story, on such topical subjects as Obamacare and Google Glass.

Jacobs’ gift to the theater world was in taking popular stage musicals and turning them into  vehicles of contemporary social satire. Several of his classics are in this book:

East Side Story: West Side Story redone as a global political struggle between JFK and Kruschev

Antenna on the Roof: Fiddler on the Roof updated and rerouted so it’s about “America’s Upper Middle Class,” with a Mort Drucker caricature of Zero Mostel introducing this fullscale, multi-song parody thus:

An antenna on the roof? What’s so strange about that? Nothing much… except that this antenna is on the roof of our kennel!
You see, here in our $150,000 home in the suburbs, even out dog is spoiled rotten.

You may ask: Why do I work so hard to provide such luxuries as a Zenith Color TV Console for our dog? Why not just a simple Black-and-White Emerson Portable?

Because here in the suburbs, a family is measured by one yardstick—possessions!

as the chorus intones “Possessions!,” to the, er, tune of “Tradition!”

But that’s just one aspect of Jacobs’ craft. “If Famous Authors Wrote the Comics” includes Donald Duck as if written by Paddy Chayevsky, Dick Tracy as if penned by Gilbert & Sullivan (“I polished up the apple at such a clip/ That now I am a flatfoot in a comic strip”), Rex Morgan MD in the style of Rodgers & Hammerstein and Little Orphan Annie as if done by Tennessee Williams (“Cousin Asp… We gotta send Little Annie back to the asylum…”

Jacobs’ parody of the Irving Berlin song “Blue Skies” for the songbook Sing Along With Mad in 1961 led to a landmark case in copyright law. Berlin sued, arguing that Jacobs’ health-care plaint “Blue Cross” was dependent of the tune of the original. The case was decided in the New York State Appeals Court, and the U.S. Supreme Court declined to hear Berlin’s further appeal. It’s no understatement to say that without this legal precedent, shows like Forbidden Broadway could never have existed. Other tunes used in Sing Along With Mad:

• “A Cockeyed Optimist” from South Pacific becomes “A Nuclear Physicist”

• “Albert Einstein” is sung to the tune of “Oklahoma”

• “Anything Goes,” without title changes, but now pertaining to advertising: “When Listerine can promise gaily/ That all girls who gargle daily/ Get lots of beaus/ Anything goes!”

• “You’re the Top” as sung by a doctor to his patient (“You’re a chest contusion … a blood transfusion… You’re nasal drip!”)

In the “Songs of Sports” category of the six-page, 24-song songbook,Weill’s “September Song” becomes the sports-themed “November Song” while “How Are Things in Philadelphia?” (nee Glocca Morra) asks in its second line “Did those Phillies lose again today?” The gamblers’ theme “Let’s Do It” suggests “Let’s do it—let’s make a buck,” while “The Girl That I Marry” (yet another Berlin tune—“Always” is also in there) is transposed to “The Horse That I’m Betting.” 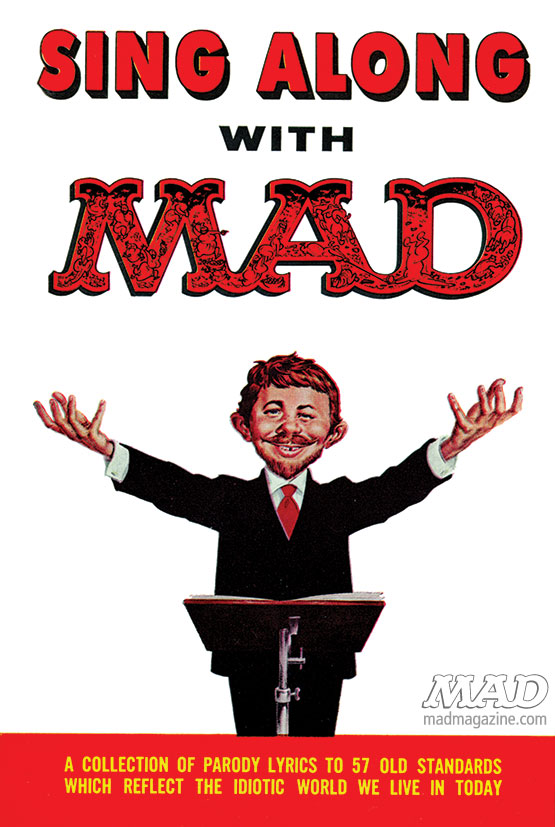 Sing Along With MAD was expanded into a paperback book, containing other Jacobs musical makeovers. Later songbooks in the magazine included “Songs of Food” (“There’s a bright golden glaze on the Egg-Roll…”) and Songs of Pets (Hymn to a Turtle: “I’ve Grown accustomed to your pace”). Showtunes also come up in the “That’s Entertainment” parody “What’s Entertainment?,” which uses Showboat’s “Ol’ Man River” to characterize a certain 1940s Hollywood mogul as a slaveowner: “L.B. Mayer, that L.B. Mayer/ With him no actor ain’t got a prayer/ Because he’s ownin’/ He keeps on ownin’ us all.” 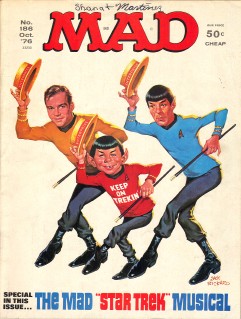 Comic Strip Heroes Taken from Real Life offers strips starring Richard Burton and Elizabeth Taylor (in the manner of Dagwood and Blondie) and Barbra Streisand (“I’d love teaming up with you, Ringo, but I have a feeling the Public might not be able to us apart!”). Streisand is further mocked in Frank Jacobs: Five Decades of His Greatest Works with a seven-page parody mash-up of her movies called “On a Clear Day You Can See a Funny Girl Singing ‘Hello Dolly’ Forever.”

Frank Jacobs has probably published more theater-themed jokes than anyone outside the Algonkuin Round Table. His Mad Library of Extremely Thin Books contains a slender volume titled “The Warm, Sentimental World of Edward Albee.” “William Shakespeare at the Post Office”  is an ensemble play in which each line spoken by civil servants (“Go hang yourselves all!” or their longsuffering customers (“In eternal lines”) come from the bard’s plays or sonnets.

Outside of the American theater, Jacobs has just as deft a touch when parodying 19th century poets. His satires tackle bigotry, psychoanalysis, World War (“The Adventures of the Red Baron, a counterpoint to Snoopy’s World War I flying ace), racial stereotypes (“American Jokes They’re Telling in Poland”), the commercialization of the American bicentennial. Craftwise, he’s exceptionally ambitious. His humorous concept of “what if daily newspapers reported all their news in rhyming verse?” runs to four pages and over a dozen separate poems. “Mad’s All Inclusive Do-It-Yourself Country Western Song” is a fill-in-the-blank bonanza with 12 sections of twelve options each. Jacobs’ political satire includes “Bush” (a parody of Joyce Kilmer’s “Trees”), “Reagan” (Poe’s “The Raven”) and “The Far-Out Ride of Edwin Meese” (apologies to Longfellow), but also, from 1994, “The Clintstones” (“Meet the Clintsonres! They’re America’s First Family! From the town of Li’l Rock, and the one in charge is Hillary!”). This collection contains two separate rewrites of “Casey at the Bat,” one an indictment of dice-playing and the other of baseball itself.

Some of Jacobs’ witticisms concerning “gay lib” or rock & roll are sorely dated, but hey, here’s a guy who, when aiming at an obvious target such as Pamela Lee Anderson, does so in the format of Poe’s tragic “Annabel Lee.”

Frank Jacobs works on a higher plane than so many other popular parodists and satirists. He doesn’t just rework hit songs, he does entire musicals. He works longform, adds depth and originality. Oh, and he’s very funny:

Nikita Kruschev: Then it’s all set. We rumble!

Kruschev: At the General Assembly!

Stevenson: We accept! You started this trouble anyway!
Kruschev: We did not! Who built up NATO?

Stevenson: Who enslaved half of Europe?

Kruschev: Who built bases in Turkey?

Stevenson: Who built the Berlin Wall?

Stevenson: Who jams the Voice of America?

Kruschev: Who set up the Baghdad Pact?

Stevenson: Who was that lady I saw you with last night?

Kruschev: That was no lady, that was my… NOW CUT THAT OUT!