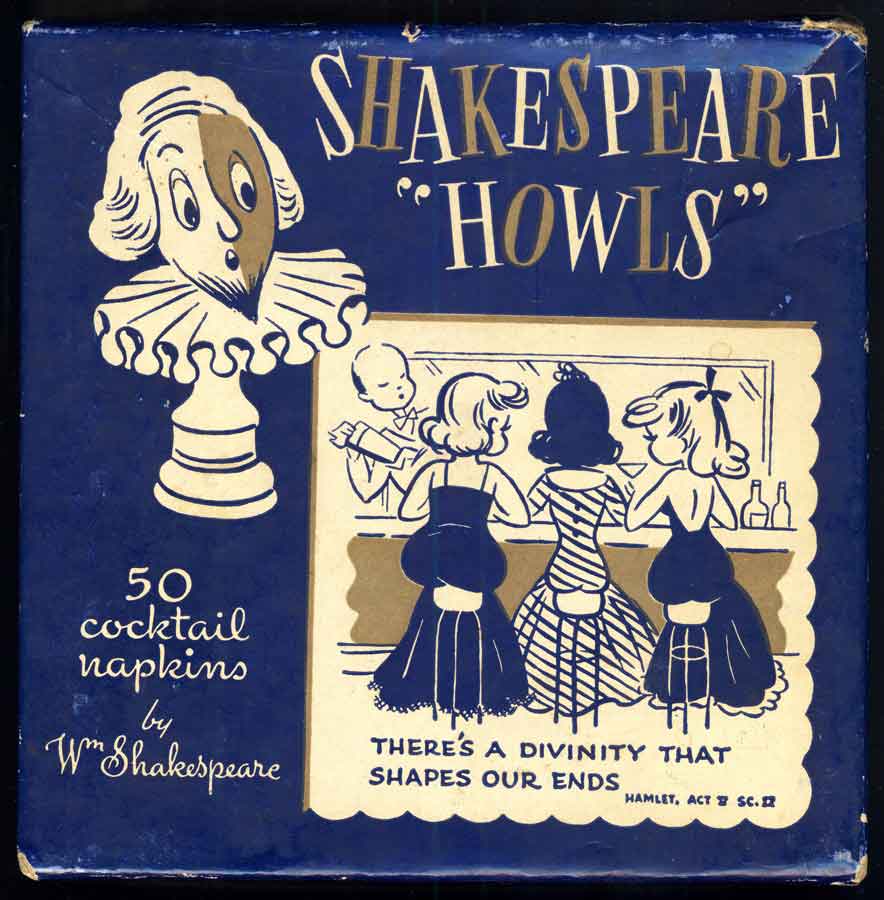 The 20th issue of Hogan’s Alley, the indispensible and highly entertaining “magazine of the cartoon arts,” includes a five-page article, “Absorbing With the Bard,” that discusses and analyses a box of cocktail napkins emblazoned with cartoons inspired by Shakespearean quotations. The caption, for instance, for an illustration of a lush being poured one martini too many is captioned : “’Tis a cruelty to load a falling man.” (King Henry XVIII, Act V Scene III). A hobo sleeping in a public park (replete with “Keep Off the Grass” sign) is interrogated by a beat cop thus: “How long within this wood intend you stay?” (A Midsummer Night’s Dream, Act V Scene I). The cartoon-stereotype woman-driver wife who’s just crashed the family car says to her husband “If you have tears, prepare to shed them now.” (Julius Caesar, Act III, Scene II).

One imagines the creators of these cocktail napkins skimming through a Shakespeare concordance, searching for correlations with comic gag-panel tropes. Loaded words like “figure” (for comely lasses) are seized upon. 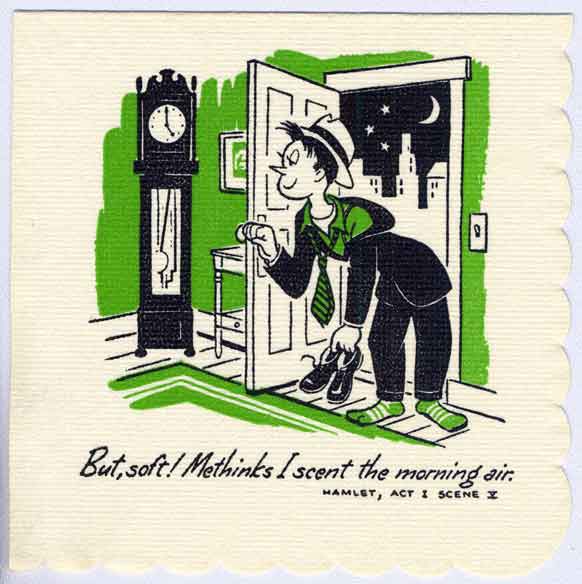 The author of the article, Michael P. Jensen, did an equally impressive and quirky essay in the previous issue of Hogan’s Alley, locating numerous Shakespearean references in the classic comic strip Krazy Kat by George Herriman. In both pieces, he is sober and studious. Of the napkins, he notes:

Only 11 of the 37 plays in Shakespeare’s traditional canon were used to create these gags, plus a well-known line from Sonnet 30. None of Shakespeare’s other nondramatic poetry was used. The best known plays supplied most of the lines, which makes the two gags from Henry VIII, a collaboration between Shakespeare and John Fletcher, a bit of a puzzle.

At one point Jensen analyzes the cocktail napkin interpretation of the King Lear quotation “Nature in you stands on the very verge of your confine,” which transposes the situation from Regan and Lear discussing the transition of power to a man staring a woman’s cleavage, confined by a tight black dress. Jensen notes that the napkin gets the text reference wrong: it’s Act 2 Scene 2, not Scene 4.

This is my kind of scholarship. Such studious attention to alcohol-absorbing bits of paper is highly (and highbally) commended. Purchase Hogan’s Alley #20 at once. You can subscribe through the website.

The site also has scanned in the complete set of “Shakespeare Howls” cocktail napkins, in color as an online bonus, here.

Previous Post: Three Titles in Four Words: The concise 2015-16 New Haven Theater Company season
Next Post: Bring Out Your Musicals! The Yale Institute of Music Theatre is accepting submissions for 2016