Saw the Goosebumps film over the weekend with my children, and I couldn’t stop me thinking about a theatrical Goosebumps production of 1998 which was much truer to R.L. Stine’s books. It also happens to be a great lost Rupert Holmes project, if “lost” (or even “unknown”) could describe a show that was seen by tens of thousands of people in dozens of cities throughout North America.

The Mystery of Edwin Drood composer/writer—who also penned several other theater shows, the pop hits “Timothy” and “Escape (The Pina Colada Song),” five seasons of the cable series Remember WENN and some cool novels—wrote and directed Goosebumps Live on Stage. He even added a couple of original Rupert Holmes songs to the show.

Goosebumps Live on Stage had a cast of around a dozen, including monsters, and was produced by Feld Entertainment, the folks who bring you Disney on Ice, the Monster Jam truck shows and the Ringling Brothers Barnum & Bailey Circus. It was booked into the kinds of theaters which get the Wiggles and Barney and big-head kid tours. Locally, that meant the Oakdale in Wallingford. I remember Holmes, who is tremendously amusing person, telling me that in that touring realm, you are rated by how many “trucks” it takes to transport your set. Goosebumps was, I think he told me, was an impressive three and a half trucks. “I asked them,” was his punchline, “what’s half a truck? How do you have half a truck?”

I interviewed Holmes before the show opened, and also talked to its announced star, Paul Benedict, who two years earlier had played the Night Clerk opposite Al Pacino’s Hughie in Eugene O’Neill’s Hughie at the Long Wharf (and also at Circle in the Square in New York). More to the point, he’d also done the Boris Karloffesque role of Jonathan at the Long Wharf in Arsenic and Old Lace. He seemed to be welcoming creepy roles at the time and, like Rupert Holmes, appreciated creative challenges in a variety of stage genres.

But Benedict left the Goosebumps tour, and there were other disappointments. When I next talked to Holmes a few years later, he laughed off Goosebumps as a dose of bad luck. He said that the publisher of the Stine novels stopped had actively promoting the series just as the musical was getting put together, so there was no crossover literary buzz for the show.

The Goosebumps stage show was more respectful of the Stine style than the new movie is. Rather than just assemble an army of iconic Goosebumps figures and turn them loose on the streets of a small town, like some huge horror video game of rampant destruction, Rupert Holmes’ show actually dramatized several scary stories, in the Stine vein (thought in fact the tales were original to the show). The framing device was a haunted bookshop.

Nice that both the film and stage versions of Goosebumps defer to the literary standing of their source material. (The movie takes place not in a bookstore but involves a well-stocked bookcase.) And both projects were turned right back into books: 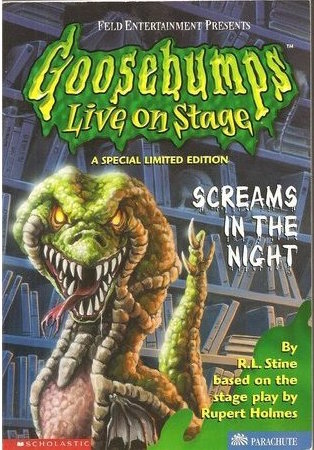 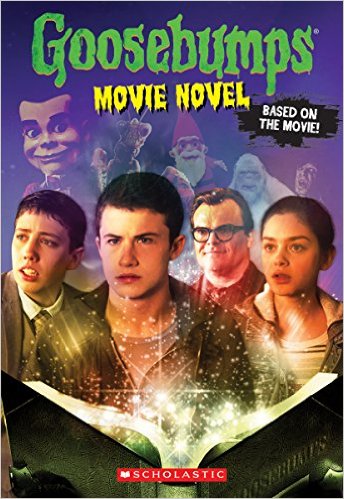 (The Live on Stage book was a special edition sold only at the show’s performances.)

Rupert Holmes has a page on his website about Goosebumps, here.

I’ve blogged at Theater Jerk about Stine before. Here is a review of his non-Goosebumps theatrical thriller A Midsummer Night’s Scream.