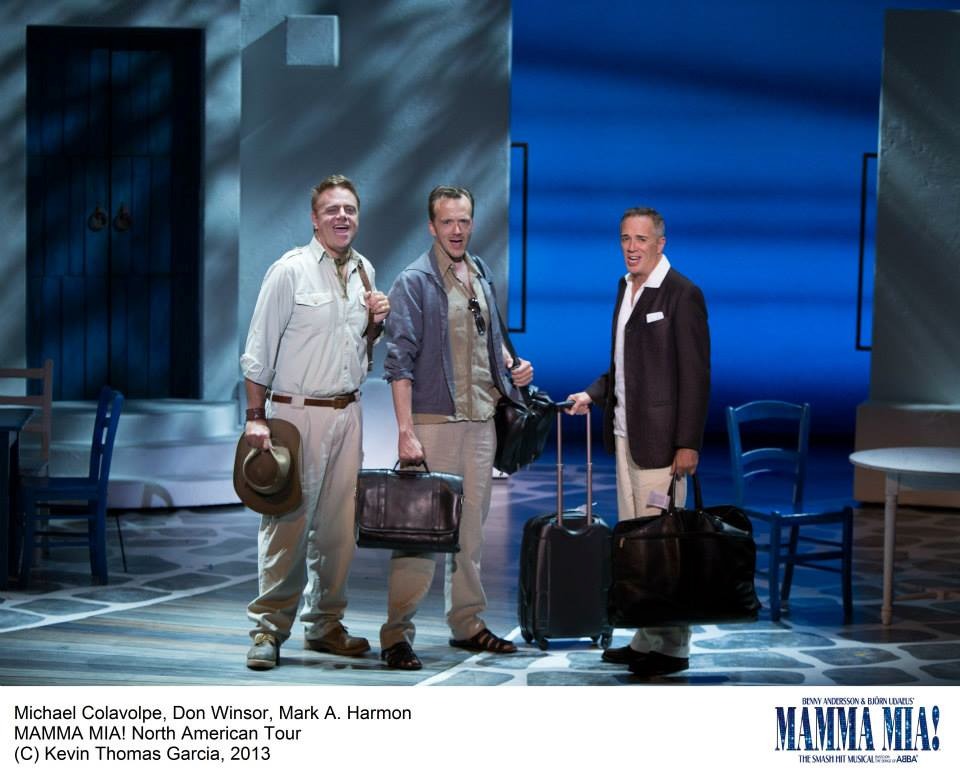 Michael Colavolpe is doing a show this weekend.

For years, in New Haven in the 1980s, ‘90s and a bit of the ‘00s, that was a common statement. Colavolpe had his own small theater company, Theatremania, through he directed, produced and acted in dozens of shows, at such intimate venues as the basement dance space of the Audubon arts building. He also acted in shows for other companies, in the basements of churches up Whitney Avenue. Last time Michael was in the area, circa 2006, he created a live gay-themed Match Game parody at the cosy 168 York Street Café.

Michael Colavolpe is doing a show this weekend. This time, it’s the national tour of Mamma Mia, at the Shubert on College Street November 22-24. He plays Bill Austin, one of three middle-aged who’ve been lured under false pretenses to an enchanting Greek island by a soon-to-be-married young woman who’s certain that one of them is her father.

If you only know the Bill character from the movie version of Mamma Mia (where he’s played by Stellan Skarsgaard, know that the character in the original stage musical version of the ABBA-scored musical gets a lot more to do. And if DO you know the Bill Austin character from the original stage musical version, know that Michael Colavolpe has been given free rein by the show’s producers to fit the role to his own strengths. “I thought there would be a set way of doing it, but no. He’s Swedish in the movie. The guy who’s playing him on Broadway right now gives him a Southern accent. The Bill I play on this tour is completely different from the Bill Austin on Broadway, or in London, or anywhere else. My Australian accent is not good, so I’m playing him as an American, with a direct, non-nonsense attitude. He’s described as a travel writer. I see him as this adventurer. Everything’s a big party for this guy.”

Colavolpe feels that he gets such leeway to interpret Bill Austin his own way because “he’s so different from the other two guys playing the other two ‘dads’.” He also credits a show which works best when it’s fast and loose and fun. His portrayal has been rewarded with “good notices, and a lot of big laughs.”

New Haven small theater buffs of years past have experienced Michael Colavolpe’s versatility and ingenuity firsthand. They might have seen him in Hair at the Performance Studio on Chapel Street, or in Karel Capek’s robotic classic R.U.R. for the Whitney Players, or as a funny felon in My Three Angels or as Oscar Madison in The Odd Couple (co-starring with Kevin Bee. Colavolpe’s real-life partner of the last 25 years).

When Colavolpe left the area in 2002, after having spent all his life in Connecticut, there was a void in the local theater scene. Theatremania continued for a few years without him before quietly fading away. Michael and Kevin found work in Florida at the Walt Disney and Universal Studios theme parks. They returned to Connecticut for a couple of years in the mid-‘00s to care for a sick family member, then returned to Orlando.

So Mamma Mia is a huge, local-boy-made-good homecoming for Michael Colavolpe. “I’ll be seeing people I haven’t seen in 30 or 40 years,” he says, including some of his high school teachers.

He’s been doing theater all his life, but this is his first tour. It’s also the first non-Equity U.S. tour in the ten-year history of the international hit Mamma Mia. Everyone in this cast is new to the show. There have been special consultations with the creative team from the Broadway version. “They changed some of the choreography just for us,” Colavolpe marvels.

He got the gig after a friend suggested that he audition for a whole other tour, of Catch Me If You Can. He nearly got the part of the Dad in that, having been flown back for a second audition which was seen by the show’s composer Marc Shaiman. “I didn’t know it was him until afterwards,” Colavolpe recalls, “and I’m glad I didn’t know. So anyway, I did not get it. Then out of the blue, I got a call for Mamma Mia. They remembered me from the other audition. It started as this fluke. Then I had to sit down with Kevin and say ‘Can we do this?’ We have a house, and jobs…

…but it was such a great show, a great opportunity, that we made it work. I love it, I love touring. I’d heard a lot of tour stories, and wasn’t sure I knew what I was getting into, but none of those horror stories has happened to me.” The tour has been playing everywhere from a school auditorium (“a REALLY LARGE school auditorium”) to an arena. The 1200-seat Shubert is on the smaller side for a show that has been playing 2500-seat venues.

Colavolpe has a great couple of generational anecdotes about the Shubert. When the theater’s lobby was renovated in the ‘90s, the actor’s father and uncle laid the carpet. Likewise, Michael’s partner Kevin’s dad had a business selling scientific equipment, and once loaned the Shubert some beakers and things for a laboratory scene in a new musical having its pre-Broadway try-out there. Turned out to be My Fair Lady.

There’s already talk of having this Mamma Mia cast extend their contracts for the next leg of Mamma Mia touring. “I’m one of the dads. It’s not a role I’ll age out of,” Colavolpe jokes. “What a show to be part of! It’s a great cast. The ensemble is crazy sick good. Everything’s done live, but a lot of people think the singing has to be pre-recorded. It’s amazing how much energy there is. We all get along so well. We’re having the time of our life.”

It’s remarkable how rejuvenating a few hours spent on a Greek island can be. Not to mention returning to chilly New Haven in autumntime as conquering adventurer Bill Austin, rocking out to “Take a Chance on Me” and “Name of the Game.” Welcome home, Michael Colavolpe. 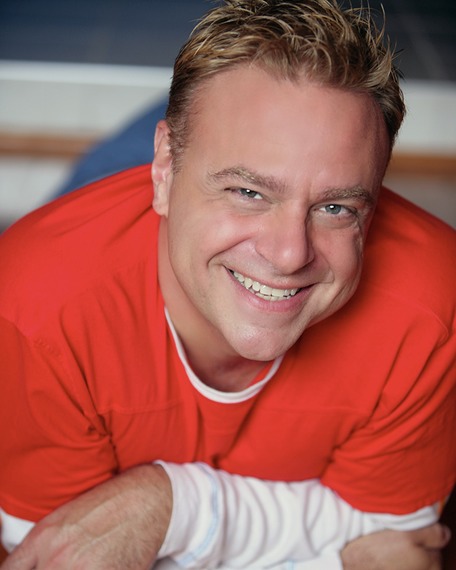 Previous Post: Theater Books from Other Realms: Dwayne Epstein’s New Biography of Lee Marvin
Next Post: On my feet