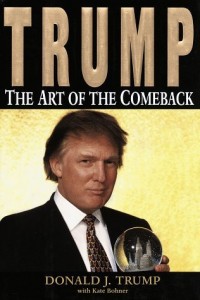 In an op-ed for CNN on the Friday after the second Republican debate, David Axelrod wrote:

The Donald lists as one of his childhood heroes, not a titan of business or politics, but Flo Ziegfeld, the Broadway impresario, whose Ziegfeld Follies once graced the Great White Way.

Barging into the race with a rambling, bellicose diatribe in the gilded lobby of his eponymous New York tower, the carrot-topped builder-cum-reality TV star turned the Republican campaign into his own follies.

Axelrod’s assessment is leagues ahead, theater-reference-wise, of the endless parade of pundits who’ve decried Trump as “performance art.”

• “Donald Trump, performance artist: Is he really “a very nice fella” when the microphones are off?” (Salon)

• Michael Moore (in an AP interview): “I know people are worried about Donald Trump, but what you have to understand about Trump, first of all, is that he’s a performance artist,”

• The Christian Science Monitor story “Donald Trump 2016: Why he’s a gift to the Democratic Party” declares “On this day in June of 2015, Donald Trump turned a presidential campaign announcement into performance art.”

It’s not even a new cliché.

During the 2012 campaign, Nation deadline poet Calvin Trillin began “Trump Trumped”—now found in his collection Dogfight: The 2012 Presidential Campaign in Verse (Random House, 2012) with these couplets:

Much like a bloated moth that’s drawn to flame.

Gas-filled as if by some gigantic pump,

At boasting he’s the richest and the smartest.

So what we’re looking at now is not an original performance, but a revival, though apparently the piece is still unfinished:

• “The Great Donald Trump Performance Art Piece Is In The Last Act” (The Ashford Zone; this one’s actually written in script form).

• Dylan Byers on politico.com (“Trump’s Circus is Back in Town”):

When The Huffington Post’s Sam Stein tweeted that Trump’s interview with ABC News seemed like “performance art,” Trump responded with a hand-written note two days later that read, “Perhaps, Sam — But it sure gave them good ratings!”

• “Donald Trump Has Finally Catapulted Us Into an Alternate Universe” according to Kevin Drum in Mother Jones magazine:

Roger Stone is famous for calling himself a “GOP hit man.” He admires Richard Nixon so much he has Nixon’s face tattooed on his back. During the 2008 presidential campaign, he founded an anti-Hillary group called Citizens United Not Timid. He played a bit part in the Watergate scandal at the age of 19. He is famous for his many rules, one of which is “Attack, attack, attack—never defend.”

Trump’s performance art spectacular had a big opening night (though of course Trump papered the house). The Daily Pregame column at genfkd.com had the scoop:

In a rousing 45-minute speech that captivated followers and janitorial staffers alike, Trump pointed out that he’s “really rich” and “beats China all the time. All the time.”

The entrance of Trump, a prolific writer, is also rumored to have enraged fellow Republican candidates jockeying for surface space at the checkout table of Barnes & Noble.

It has a cultural impact.

• “Why the GOP Should Learn to Stop Worrying and Love The Donald,” by Robert Schlesinger in U.S. News and World Report:

You’ve got to figure that the Trump factor will both maximize the usual politically engaged audience – both GOPers who would be inclined to watch any and Democrats who want to enjoy the train wreck – and will also mean that there will be crossover among casual viewers who wouldn’t ordinarily care about a primary debate but will tune in just to watch Trump the performance artist.

It evokes the classics.

• “Donald Trump, an All-American Performance Artist” (Patrick Pacheco in Blouin Art Info, illustrated with a photo of Trump next to one of Dame Edna) references Arthur Miller’s Death of a Salesman for a “You’re fired” connection, and quotes playwright Sherry Kramer saying “The irony is that Trump, because of his presence in the country’s imagination as the ‘You’re Fired’ guy, has been performing the role of the Destroyer in the quintessential American dream play.”

• “The Trump Balloon” by David Remnick in The New Yorker

Fred Trump was an old-school promoter, who, in summer, set loose colored balloons near the beach; each balloon contained a fifty-dollar discount coupon for one of his apartments. At his office, on Avenue Z, Fred Trump taught the business to his sons. Fred Trump died in 1999. One son, Donald Trump, took up his father’s example, slathered it in gold leaf and topped it with world-class cubic zirconia, cultivated a head of pumpkiny, multidirectional hair, accumulated billions of dollars (though likely fewer billions than he’s claimed), and, by the eighties, became the P. T. Barnum of his generation. My colleague Mark Singer once called Trump’s ascent a form of “performance art—an opera-buffa parody of wealth.”

The reviews have been mixed.

• “The Art of the Con, by Donald Trump” (by Kevin D. Williamson in National Review)

Trump’s performance-art character is butch in the sense that certain gay icons are butch — bikers, cowboys, and the rest of the Village People — and appealing to certain men for similar reasons, one of which is overcompensation for threats against their virility. That often descends into outright camp — who could have guessed that Queer as Folk would have provided Charlie Hunnam with only his second-most-homoerotic role? — and Trump’s race, if it actually happens, will be as campy a campaign as can be imagined.

• “The Loathsome Yet Riveting Art of Being Donald Trump” (subtitled “Donald Trump is a poet. A bad poet.” In the Hit & Run blog of reason.com

It’s far from clear that Trump literally means all the crazy things he says. Take his announcement that he won’t just build a border wall but will make Mexico pay for it. I can’t dismiss the possibility that Trump actually thinks he can do this. But it’s easier to take it as an over-the-top bit of braggadocio that’s meant more as poetry than policy. It’s bad poetry, of course, but the world has always contained more bad verse than good.

When he spouts stuff like that, Trump borrows from the second tradition: those electoral tricksters whose campaigns serve as a sort of satiric performance art.

So apparently it’s satire. If we choose not to take the performance seriously, we can still find ways to take his work seriously.

The thing is, even as Donald Trump said and did horrible things during this year’s incredible run at the White House, most sane people took solace in the fact that he could never win. (Although new polls are showing that Hillary’s recent spiral puts this reassuring thought into jeopardy.)

In fact, most veteran political observers figured that the concrete impact of Trump’s candidacy would be limited in the worst case to destroying the Republican Party as a mainstream political force.

That made Trump’s run funny, campy even, like a naughty piece of pornographic performance art. After all, what’s more obscene than pissing on the presidency? It seemed even more like camp because the whole shtick was fronted by a veteran reality TV star who might even be in on the joke, although of course the concept was funnier if he wasn’t.

• Joanna Weiss in The Boston Globe: It’s impossible to know what’s happening inside Donald Trump’s head, but intentionally or not, he’s been committing some amazing performance art. 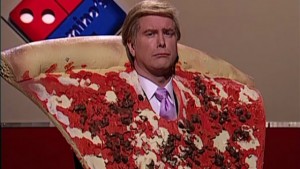 The show may not have legs.

• “A Major, Super-Classy List of Donald Trump’s Favorite Words and Phrases, for Everyone Who Is Not a Loser” by Claire Landsbaum and Jaime Fuller in New York Magazine’s Daily Intelligencer.

Armed with Twitter and a growing band of converts, capitalism-powered perpetual-motion performance artist Donald Trump is still the Republican front-runner even though the summer of Trump is coming to a close.

One of the more cogent and sustained debates about the theatricality of Donald Trump can be found in the Pacific Standard piece “Why Does Camille Paglia Love Donald Trump?” by Ted Scheinman. It’s a reaction to a long interview Paglia did with Salon. Scheinman quotes Paglia saying this:

What I’m saying is that the authentic 1960s were about street theater—chaos, spontaneity, caustic humor. And Trump actually has it! He does better comedy than most professional comedians right now, because we’re in this terrible period where the comedians do their tours with canned jokes…. That’s why Donald Trump has suddenly leapt in the polls. He’s a great stand-up comedian. He’s anti-PC–he’s not afraid to say things that are rude and mean. I think he’s doing a great service for comedy as well as for politics!

Contrarianism is sometimes useful and often fun, but, taken as logic, “what if Trump the capitalist oligarch is actually the new version of 1960s guerrilla theater” simply doesn’t compute. Trump is not some average “American citizen”; he is certainly not a comedian, and his provocations are only performance art if you willfully ignore the simple fact that Trump cares about attention, not about disruption.

“There was a point not too long ago when it became reasonable to ask a simple question about Glenn Beck: is this guy for real? It seemed entirely plausible that the media personality wasn’t nearly as ridiculous as he was letting on, and was spewing nonsense just to get attention. Beck, in other words, may be far less crazy than he lets on, but revels in the act because the schtick works for him.”

Meanwhile, in mid-May, a month before Trump announced his candidacy for the 2016 Presidential race, this happened: “A Conservative candidate’s sudden resignation marks the latest chapter in an artistic performance that’s now spanned over 15 years.”

And, in late September, this: “Occupy Wall Street activist Marni Halasa is planning a protest outside the fundraiser that will feature a performance-art piece depicting Clinton as a money-grubbing pig.”

These are actual performance art performances occurring within the realm of current political campaigns. But, as usual, Donald Trump gets all the attention. Seriously: Google “performance art” and any other Presidential candidate, and you can’t give the tickets away. No hits at all. But Trump’s show? Even art critic Evan Goldman, who knows what real performance art is, is on the beat, and (in a Huffington Post op-ed) comes to the only logical conclusion: 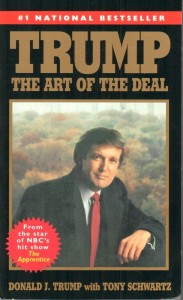