The Skin of Our Teeth

Presented by the Yale School of Drama through Oct. 24 at the Yale Repertory Theatre, corner of Chapel and York streets, New Haven. (203) 432-1234, www.yalerep.org

It may be because I’ve lived most of my life in college towns, but Thornton Wilder-wise, I’ve seen The Skin of Our Teeth more times than I have Our Town.

Both plays are great—nay, universal, transformative, compelling and cool. Both won Pulitzer Prizes. To suggest that The Skin of Our Teeth is a lesser work than Our Town is to ignore the fact that it’s a much more ambitious one. Blessedly, it’s also more open to interpretation. Nearly all of the Our Towns I’ve seen have been alarmingly similar. None of the Our Teeths have been.

The Skin of Our Teeth is a fine show to see when there’s a war on. It also is nice to see when a national election campaign is afoot. If some big moral or religious argument is in the news, the play mirrors it. It explores the meanings of family, self-worth and survival in a way that never goes out of style. How a director chooses to prioritize the themes of this multi-faceted march through time and space is part of the glory of seeing it done fresh.

The Yale Repertory Theatre did The Skin of Our Teeth in 1997, with the Rep’s resident director Liz Diamond and a cast made up of third-year Yale School of Drama students. That was an expansive, high-tech rendition with extraordinary lighting by Jennifer Tipton and a bravura performance by James Shanklin as George Antrobus. Kara-Lynn Vaeni did a flashy, colorful, somewhat scaled-down production (with a tightly confined set and a mere 11 people in the cast instead of the full-blown 17 or 18) of the play as her Yale School of Drama thesis project in 2003.

Now Luke Harlan has chosen The Skin of Our Teeth for his YSD thesis endeavor. One has to wonder why it isn’t chosen every year by someone at Yale. The play is not just ready-made for the sort of interwoven, enthusiastic student ensemble that the School of Drama is expert at creating, its dialogue is packed with jokes about acting, theater in general, intellectualism and New Haven.

A script that is so self-consciously theatrical is a wonderful match for a director with such a deliberate, careful mood-setting nature as Luke Harlan. Harlan inserts his directorial attitude directly into his productions—in this case literally so, since he’s cast himself as the show-within-a-show-without-a-show’s Stage Manager.

It was a special thrill to catch this Skin of Our Teeth at its very first performance. Not that they broke character or anything (except when Thornton Wilder wanted them to, you know) but you could tell the performers were surprised at where some of the biggest laughs, or gasps or applause lines, were. Harlan paces each act differently, openly melodramatizing the opening scenes, shifting to less character-based presentational styles (political speechifying, danceclubbing, sex) after the intermission and then slowing the whole thing done for a dark, shadowy denouement.

The Skin of Our Teeth, like a lot of Wilder plays, is equal parts Greek Tragedy and cutting-edge modern drama; traditional and experimental; distant and in-your-face. Wilder makes Creationism and evolution exist on the same stage. The confidence he shows by jumping from style to style, or stopping the action dead in a succession of fourth-wall-breaking ruminations, is astonishing.

Luke Harlan and the hardy cast and design team are up for the challenge of giving this ever-shifting play some momentum, fluidity and deeper meaning. Not all the staging choices are successful—the Equus-like wire-frame wooly mammoths bring too much abstraction too soon, a call for the audience to hold their cellphones aloft and mimic a starry night was neither well conveyed nor well carried out, and for hardcore lovers of the script there are some awkward and curious cuts and pruning. But there are many moments which are so fresh they make a script that’s nearly three quarters of a century old seem like it’s a brand new work. (In fact, Thornton Wilder fan Paula Vogel’s brand new work Indecent, playing just down the street from The Skin of Our Teeth at the Yale University Theater, has many things in common with this well-aged classic.) The production is neatly anchored with magazine ads and newsreels that evoke the era in which the play was written—a dead-on projection design by Rasean Davonte Johnson that’s as campy and quirky as it is nostalgic.

The main thing to say about the cast is that a lot of very good young actors (Shaunette Renee Wilson, Ricardo Davila and Dylan Frederick among them) aren’t given nearly enough to do. It’s an embarrassment of riches. In the main roles, Melanie Field as the outspoken maid Sabina (and her various doppelgangers-through-time) evokes the sassy-broad broadness of the role’s legendary originator, Tallulah Bankhead. Andrew Burnap plays George Antrobus (inventor of the wheel, candidate for high office and insufficient father figure) as a handsome guy on the way up rather than as the more mature, mellow figure he’s often seen as. Baize Buzan as George’s wife Maggie has great poise and a no-nonsense snippiness. The showstealer, in my opinion, is Aubie Merrylees as wayward son Henry Antrobus (aka the biblical figure of Cain). I’ve seen him in a bunch of things at Yale and am in awe of his range. He does goofy well, but also can nail a suspenseful speech laden driven by evil internal impulses. Henry’s speech in the third act takes this production of The Skin of Our Teeth to a whole new level—for Merrylees to accomplish that feat so far into a three-hour production is remarkable.

The Skin of Our Teeth is a trip through time. It draws from both James Joyce and Mark Twain. It drags its characters through the ice age, the history of civilization and worldwide catastrophe. It’s a play to be experienced live, and this production makes you feel that sense of length, breadth and endurance without wasting your time. It’s got Teeth. 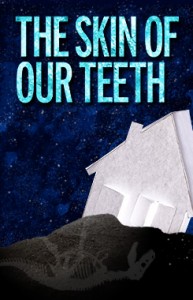