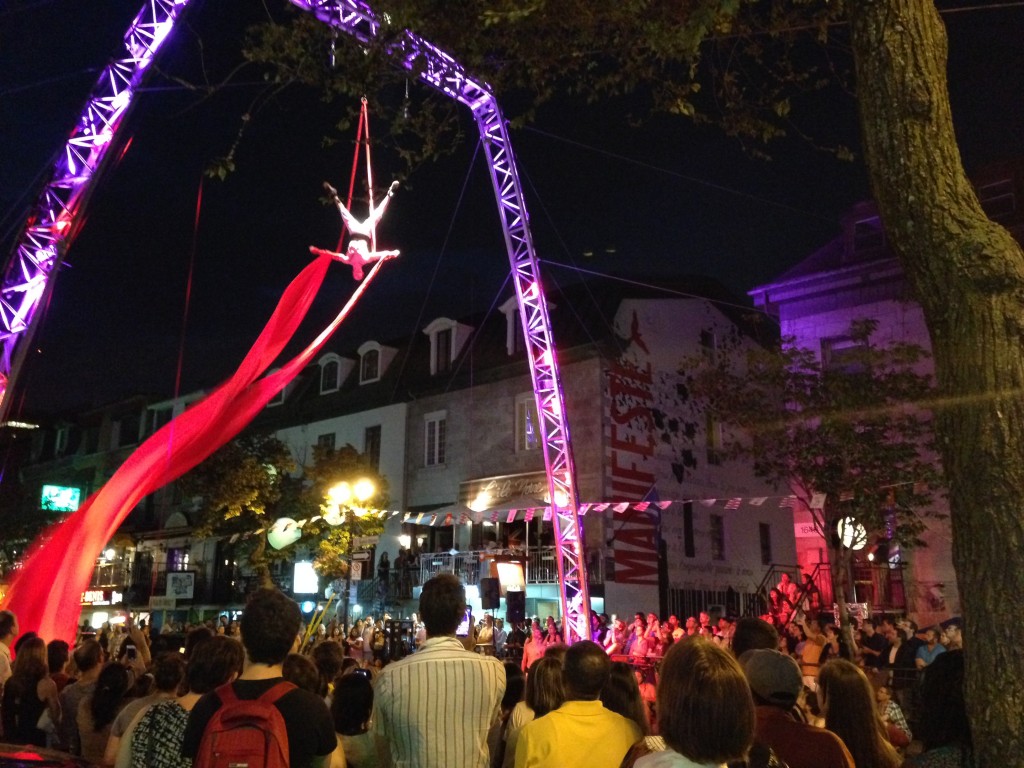 In early July, I went to Canada for a “writing residency” related to the annual Completement Cirque (like, “Totally Circus”) festival in Montreal. Spent a week there exploring the latest innovations in circus theater. Montreal’s the hotbed for such stuff. Cirque du Soleil’s based there, but they’re considered “the establishment” by a new breed of circus artists who are infusing this acrobatic artform with darker themes, deeper narratives, advanced technology and modern tastes. Much of these “new circus” acts are deliberately low rent, performed in street clothes and naturalistic styles.

Part of the deal with this residency—a full-blown intensive course of study, which involved lectures, interviews with major international circus theater creators, and nearly a dozen shows—was that each of the ten writers who’d been a part of this thing would produce a manuscript of 2000 words or more about their Montreal Completement Cirque experience. These articles, which range from the academic to the journalistic to the diaristic, were assembled into an online journal on the website of En Piste, the circus arts organization which sponsored the residency. 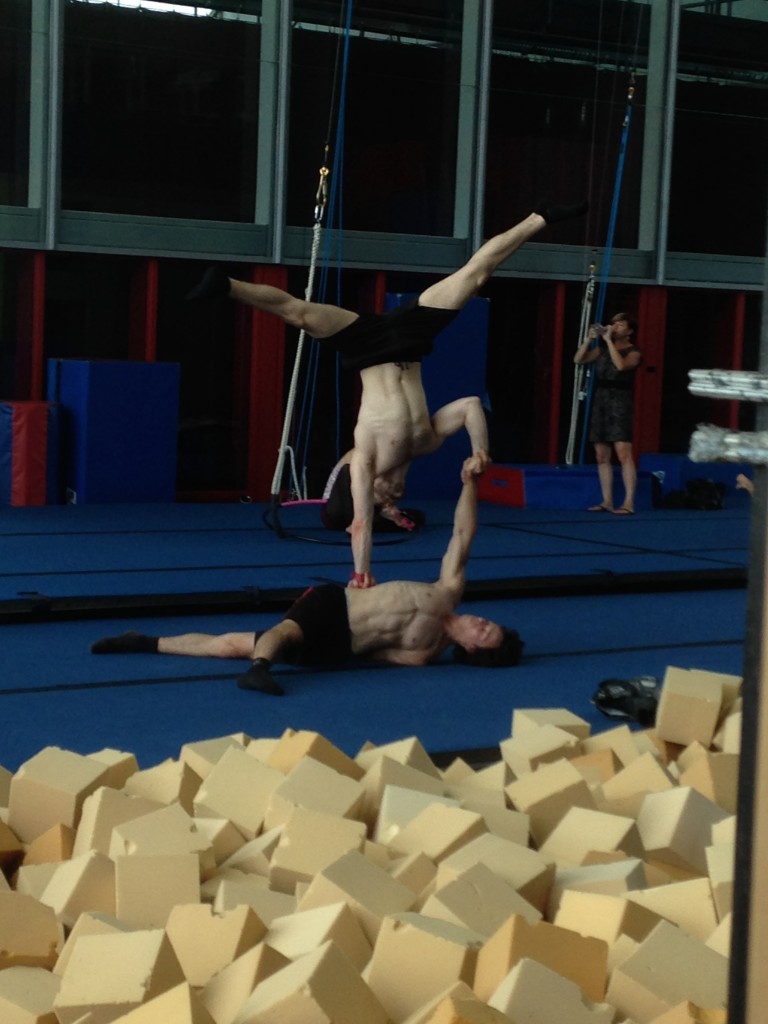 That “journal” just got published, here.

Because I am talented and clever enough to have a surname that begins with “A,” my contribution comes first in this alphabetically organized anthology. I did an observational piece about a particular physical gesture that’s ubiquitous in new circus works, an action I have unimaginatively yet accurately dubbed “clambering.”

You don’t  have to scroll down far in the journal to find me. Yet I implore you to check out the other articles in the “Circus Stories, Le cirque vu par” journal. (Nearly all of them are in English, by the way.) The whole point of the exercise was that great advances are being made in circus theater, leaps that many critics and scholars haven’t noticed yet or are just starting to catch up with. This journal is an important primer for contemporary circus theater studies. Plus, you know, circuses! The photos are really cool.

There’s more to say about Montreal, but I’ll save that appreciation for another time. There’s plenty to read right here.

Here’s the En Piste press release about the publication:

Coming from Montreal, St. Catharines, Vancouver, New Haven, Boston, New York, and Philadelphia, the participants saw numerous circus productions, met artists, and attended conferences given by experts from July 3-6. They also participated in thematic discussions with a moderator, all this during the fifth edition of the MONTRÉAL COMPLÈTEMENT CiRQUE festival.

The ten participants were made aware of current issues in the contemporary circus and the artistic landscape and deepened their understanding of and reflection on the drama and new trends in circus during their time in Montreal. Their occupations, training and respective experience colored their understanding of the world of contemporary circus, which they describe, interpret and criticize in their articles written during the residence. These 10 articles are now available in a publication you will find in the Actualities section on the website of En Piste.

An initiative of En Piste, the national circus arts network based in Montreal, this North American initiative was supported by the Montreal Arts Council and the Canadian Arts Council. It is with pleasure and pride that we announce a next edition of this program to take place next year. 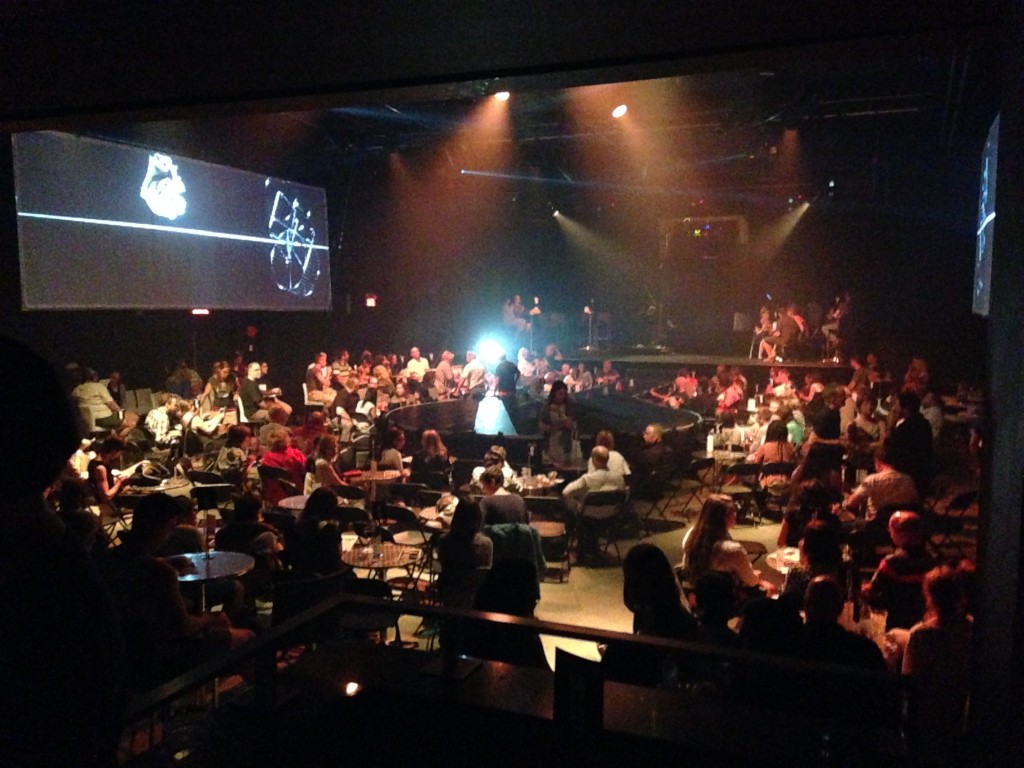