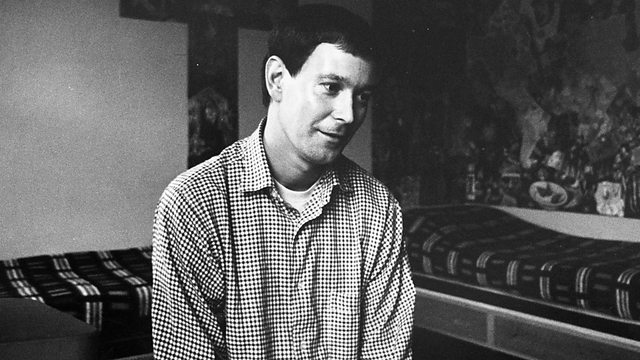 You can listen to the still-audacious 50-minute play here, but only through next Tuesday morning (Sept. 9). Radio Four Extra shows are only up for a week.

The Ruffian on the Stair still gets staged all the time, especially by college students, but it began as a radio script, and this is the genuine world premiere 1964 radio production. It stars Avis Bunnage (of Joan Littlewood’s Theatre Workshop troupe), Kenneth Cranham (the Scottish actor who also appeared in the successful 1966 production of Orton’s Loot and the 1975 West End revival of his The Entertaining Mr. Sloane) and the familiar Irish comic actor Dermot Kelly (from the film The Quare Fellow). Popcult buffs known Cranham as Dr, Philip Channard in Hellbound: Hellraiser II, while Kelly and Bunnage were both in the 1968 Herman’s Hermits movie Mrs. Brown You’ve Got a Lovely Daughter.

Listening to Ruffian on the Stair now, you can hear exactly how deliberately and deftly Orton balanced his shards of sharp-tongued modern satire with his send-ups of conventional drama. “Wantonness!,” a woman tsks.

The radio version has a different ending, and beginning, than the stage play which grew out of it. (Both scripts are based on an unpublished novel, The Boy Hairdresser, which Orton co-wrote with his roommate and eventual assassin Kenneth Halliwell.) Much of the middle has been messed with as well. But all the essentials are in place in this original rendition: the gallows humor, the working class self-pity, the casual insults and depredations…

If you’ve wondered how this stuff played when first done, the answer is: speedily. The actors (and director John Tydeman, who headed the BBC’s Radio Drama department from 1986 to 1994, and had produced and directed plays there since 1960) intuitively grasp Orton’s mix of deadpan and shock. It’s not quite a sitcom pace, but it’s much quicker and livelier than, say, what was being done with Pinter plays of the same era. Pinter was, as John Lahr details in his masterful bio of Orton, Prick Up Your Ears, stylistically beholden to Pinter, being self-consciously derivative of him in Ruffian on the Stair and advancing to being openly parodic in his later plays. But when penning instructions for the stage version of The Ruffian on the Stair, Orton is adamant that it be played briskly, without improper pauses. On the other extreme, he insists that it not be campy or comically unrealistic. The characters need to be believable, he says. “REALISTIC PLAYING AND DIRECTING,” he upper-cases. “Pace, pace, pace, as well.”

It’s remarkable that the radio production had already nailed this style before Orton had the opportunity, and power, to demand it. The Ruffian on the Stair, after all, was his first produced thing. It led to him getting an agent, getting his stage plays produced, and becoming an adjective (“Ortonesque”) in deservedly rapid succession.

Ruffian on the Star remains so bracing, so suspenseful, that it still causes you to wonder, 50 years after it first aired, how it ever could have gotten on radio. Granted, the BBC has always been progressive and open-minded in the sorts of plays it commissions and broadcasts. The network’s embrace of big political and social themes puts most American public broadcasting to shame. Yet Orton’s stuff is stark and snarky, openly disdainful of its own audience. It really sparks on the radio. Its ironic and off-color comments, delivered in normal speaking voices (and not as verbal cattle-prods as we’re accustomed to from right-wing talk shows or drive-time spectacles) really jump out at you. It’s insidious.

On the rebroadcast, the BBC offers just a meek disclaimer, that The Ruffian on the Stair “reflects the attitudes of its day,” presumably for a few lines that mock black and queer stereotypes. If it only The Ruffian on the Stair truly did reflect the attitudes of its day, and not just the singular black-comic genius of Joe Orton. Imagine if all radio theater was this oddball and mysterious and laidback.

Radio drama is horribly underappreciated in America, which is frustrating since this country dominated the form throughout its pre-TV golden age, to the benefit of many great stage actors. England’s still got it going on, and even in the mid-‘60s, when radio drama seemed especially doomed, was taking chances on new writers with deliciously disturbing new ideas.

Here’s another great deal about radio theater: I just experienced an historic broadcast that’s half a century old, and was so awestruck I listened to it two more times right away.