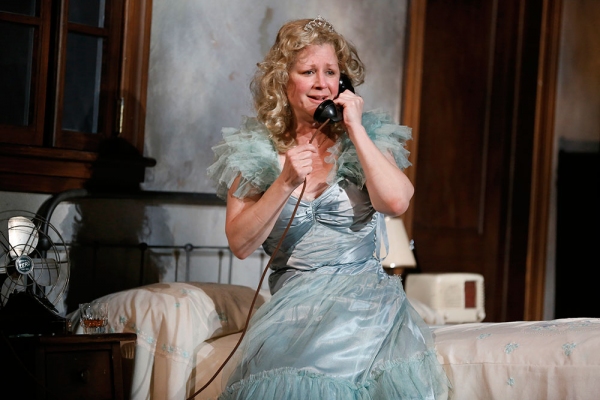 Yale Rep’s announced the cast for its season-opening Arcadia, to be directed by the theater’s artistic director of the past dozen years, James Bundy. The cast list is truly a Stoppardian mix of trad, progressive, young, old, and geographically diverse. It’s a casting equation as profound as any of the advance sociomathematical theorems in this time-spanning, mindblowing play.

• Rene Augesen, the West Coast regional star and Yale School of Drama grad who played Blanche DuBois in LAST year’s Rep season-opener, A Streetcar Named Desire, will be Hannah Jarvis, the main heroine of the modern half of the play.

• Annelise Lawson, a second-year YSD student and a company member in the 2014 Yale Summer Cabaret season, is Chloe Coverly, Thomasina’s modern young woman counterpart in the 20th century side of the play.

• Rep mainstay Felicity Jones, who’s appeared at the theater eight times since James Bundy became Artistic Director there, plus a couple times before that, in everything from Lulu to Master Builder to Fairytale Lives of Russian Girls, is Thomasina’s mother Lady Croom.

• Tom Pecinka, a YSD third-year, who was in the creepy rethink of Peter Pan and the Yale School of Drama/School of Music staging of The Soldier’s Tale which played Carnegie Hall, is in the key role of Thomasina’s tutor Septimus Hodge.

• Max Gordon Moore, who snagged some neat New York credits soon after graduating from the Yale School of Drama a couple years ago, is Valentine Coverly, the older brother of Chloe. Moore’s well remembered by Yale Cabaret audiences for doing Underneath the Lintel, a role which had been played previously by his actor father Todd Jefferson Moore.

• Michael Rudko, who has his bachelors degree (in English, not Theater Studies) from Yale, was in Rep productions of Tartuffe (as Orgon in the dreary Daniel Fish one in 2007) and the James Bundy-directed A Woman of No Importance in 2008; he plays Jellaby the gossipy butler.

• Jonathan Spivey, who plays the cuckolded poet Ezra Chater, was in James Lapine’s recent adaptation of Moss Hart’s Act One on Broadway and played Howard Wagner opposite Jeffrey DeMunn’s Willy Loman in a notable 2011 Death of a Salesman directed by Pam McKinnon.

• Stephen Barker Tuner (who plays Bernard Nightingale, the modern-day TV-savvy academic) was in two previous Rep shows: Compulsion (about the publishing of Anne Frank’s diaries) and David Adjmi’s mesmerizing The Evildoers. He’s also been in the premieres of three separate Theresa Rebeck plays.

• Julian Gamble, who was Juror #10 in the Richard Thomas/George Wendt national tour of 12 Angry Men which played the Shubert and the Bushnell eight or so years ago, plays Richard Noakes the gardener.

• Bradley James Tejeda (in the dual role of Gus and Augustus Coverly) is in his second year at the school, where he was in the three-man show Bird Fire Fly at the Carlotta Festival of New Plays this past spring.

Some meaty roles for School of Drama students here, but then, that’s why the big-cast Arcadia is done so often by colleges and universities. The thrill here is to see young actors working out alongside seasoned professionals. Arcadia’s set is by student designer Adrian Martinez Frausto, who nailed a trad/modern blend last year in a School of Drama production of Hedda Gabler. Costumes are by another student, Grier Coleman, who did that gritty WWI-set Peter Pan. Lighting? Another student, Caitlin Smith Rappoport, who maneuvered the tricky multilevel THUNDERBODIES at the Carlotta Festival. Sound? Yes, a student, Tyler Kieffer, who did the sound for Peter Pan and for a play which Arcadia vaguely resembles in its multigenerational culture clash, Caryl Churchill’s Cloud Nine. Kieffer’s one of the co-Artistic Directors of the upcoming 2014-15 Yale Cabaret season.

Stoppard’s spoken on the Yale campus before. I saw him years ago at Battell Chapel. A dazzling speech, which including a long, intricately detailed description of a moment from Peter Brook’s legendary 1970 production of A Midsummer Night’s Dream, a litany of lavish and gorgeous imagery which led to this punchline: in the script, this sumptuous scene was simply noted by Shakespeare with the word “Exit.”

Tom Stoppard, I think, writes big plays because he understands the creative ensemble process. He trusts skilled directors and actors to bring life to his words. Here’s hoping the Rep’s cast and creative team for Arcadia will do him proud.