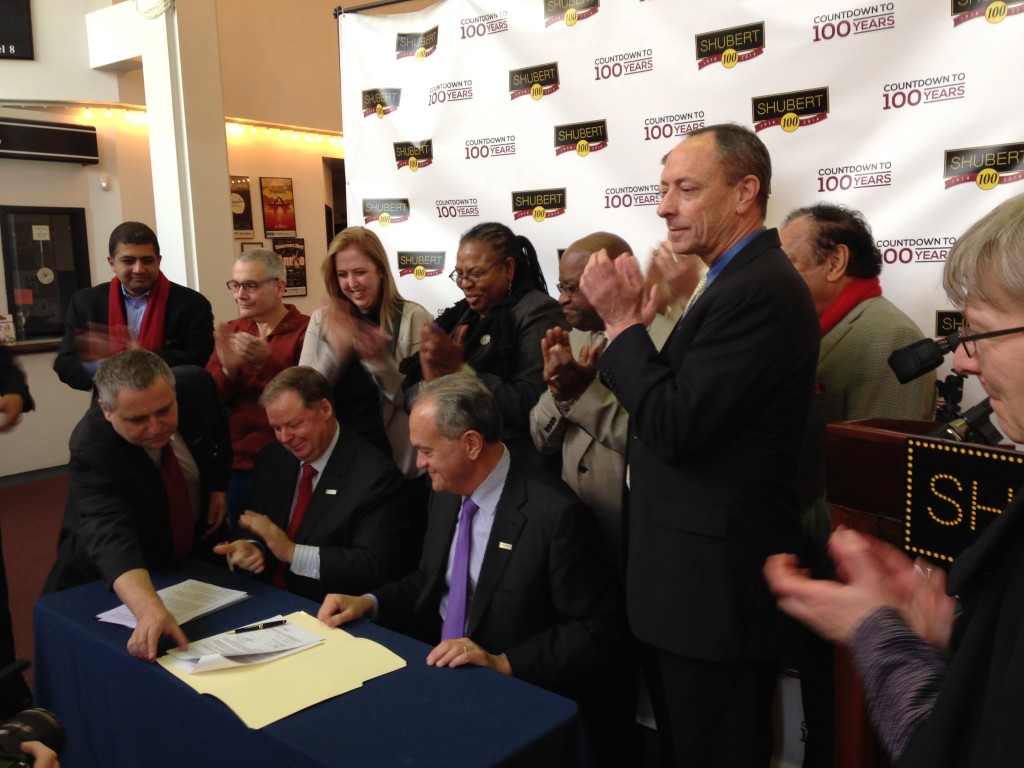 The city’s time in show business might be over, but the Shubert Theater’s run is nowhere near done as it comes under new ownership and gears up for its 100th year anniversary.

The curtains closed on the city’s run in show business Wednesday, but the lights remained on at the Shubert Theater as it celebrated its 99th anniversary and a new owner.

I attended the signing of an agreement last week which passed ownership of the Shubert from the City of New Haven to CAPA, the organization which has been managing the place for the last dozen years or so. The event was held in the Shubert lobby on a day which also happened to be the theater’s 99th birthday. Claire’s vegetarian restaurant, one of many small businesses in the neighborhood which benefit greatly from the presence of the Shubert, provided a huge Lithuanian Coffee Cake for the occasion.

I covered the coming of CAPA to New Haven back in 2001. The company, which originally stood for Columbus Association of the Performing Arts and ran several theaters in Ohio, had leaped over to the East Coast and was opening a special branch of its operation—conveniently named the Connecticut Association of the Performing Arts—so it could restore some luster to the Shubert.

The theater had been running pretty well as a community non-profit with its own management staff and board and much help from the city, but had run afoul of the same changes in the entertainment industry that were affecting similar theaters around the country. Touring shows were getting much more expensive to book. Many venues had to renovate their stages and auditoriums to compete, and many historic theaters simply didn’t have that option.

During the ’90s, the Shubert had a Best of Broadway season with six or more options, all Equity tours which ran for two weeks in New Haven. When the non-Equity first national tour of The Music Man was booked, there were picket lines to show support for union endeavors. Within a few years of that protest, non-Equity tours had overtaken Equity ones at the Shubert, and now non-Equity is the norm—not just here but at virtually all the smaller theaters on the touring circuit.

In the ’90s, the Shubert had a crack at many first national tours, because there were more of them than any one theater could book. The Bushnell in Hartford, better equipped for big new tours, tended to get first dibs then and now, but now they get virtually all of what’s new on the road.

In the ’90s, the Shubert had a separate subscription-based dance series, and a subscription-based opera series. Those series are long-gone, not just because the audience dwindled but because the number of companies to choose from dwindled too.
CAPA was the most hopeful of the several candidates vying to take over the Shubert when the theater’s self-management model was no longer deemed workable. CAPA was the only bidder which wasn’t asking that the city assume responsibility for another cost overruns caused by new management. CAPA was confident that its proven record of mixing theater events with concert events and community events in a single venue would keep the Shubert solvent.

There were some unforeseen obstacles, largely on the marketing side. To gain traction with advertising, theaters have to go way outside local and regional markets and basically have to blanket the state, a phenomenal the Midwestern-rooted CAPA had not experienced before. The touring entertainment industry was still going through changes, and theaters could make costly mistakes if they were overconfident about how many people a given show might attract. Some sure things weren’t quite as sure.

But CAPA also made some smart moves that assured that New Haven would give them a fair shake. The company retained of the staffers who’d been serving the Shubert faithfully for years, such as General Manager John Fisher (who was promoted to being the Shubert’s Executive Director) and marketing director Anthony Lupinacci. As promised, CAPA used the clout it had amassed in the Midwest to entice certain acts to tour Eastward; running the Shubert as well as venues in Ohio meant they could provide a couple of surefire stops, enticing some enterprising acts to mount full-scale national tours.

Most importantly, CAPA widened the variety of programming at the Shubert so that the venue could finally shed a somewhat undeserved image as a high-ticket enclave for snooty society types. CAPA brought in rock and pop acts which previous Shubert managements had never considered. (The usual excuse was that the Palace Theater across the street was a better match for those shows, but that argument still meant a lot of worthwhile acts never played New Haven, and was in any case rendered moot when the Palace stagnated for years and finally closed its doors around the same time that CAPA was gearing up to run the Shubert.) When Lucinda Williams played the Shubert early on in the CAPA regime, audience members were asked en masse if this was their first time in the theater. Nearly everybody in the packed theater raised their hands.

So while whole old audiences—for dance and opera—were dying out, concert crowds were clamoring. In recent months, the Shubert has offered much-hyped sold-out shows by Elvis Costello and Chris Cornell, with a show by the new Pixies nigh. These are shows that are more meaningful and important for being in the Shubert instead of a rock club or festival. The Shuber imbues a certain magnificence and comfort on everything it hosts, whether that’s a non-Equity tour of Mamma Mia or a scaled-down “evening with” rock-star gig.

From the get-go, CAPA kept up good relations with the city, booking the free summer concert series on the Green among other things. That goodwill has obviously persevered. The city has long recognized the importance of having a theater downtown. CAPA’s management abilities meant that the city could remove itself from direct ownership and other liabilities associating with the Shubert while making sure the theater remained a tourist draw and historical landmark.

With the city no longer listed as owner of the Shubert, the venue can apply for the kinds of grants that will allow it to have its biggest overhaul in decades. Renovations will begin almost immediately, and will result in a new black-box performance area on the mezzanine level, allowing for a whole other raft of bookings and community events.

In some respects, the city-to-CAPA Shubert switch-off is nothing special or unexpected. It was always a distinct possibility, dating back to when CAPA first took over as manager. CAPA has proved itself and deserves the honor of owning the Shubert. It cares about the place as much as the city does, and understands it better. The building was always a point of contention for certain alderpersons and citizens who didn’t like the idea of so many tax dollars going toward what they perceived as mindless entertainment. But the Shubert is a specialized business, one that can drive money and attention to other businesses if properly managed. It’s also become emblematic of New Haven’s role as cultural capital of the whole state of Connecticut.

As the Shubert marches towards its grand 100th birthday next December, with all the attendant glory and celebration, we can rest easy knowing that it’s in good hands.

Curtains up! It’s earned its place in the spotl… Oh, never mind.

Previous Post: Afterlife of Accidental Death
Next Post: The Circus in Winter to Grace Goodspeed Next Fall