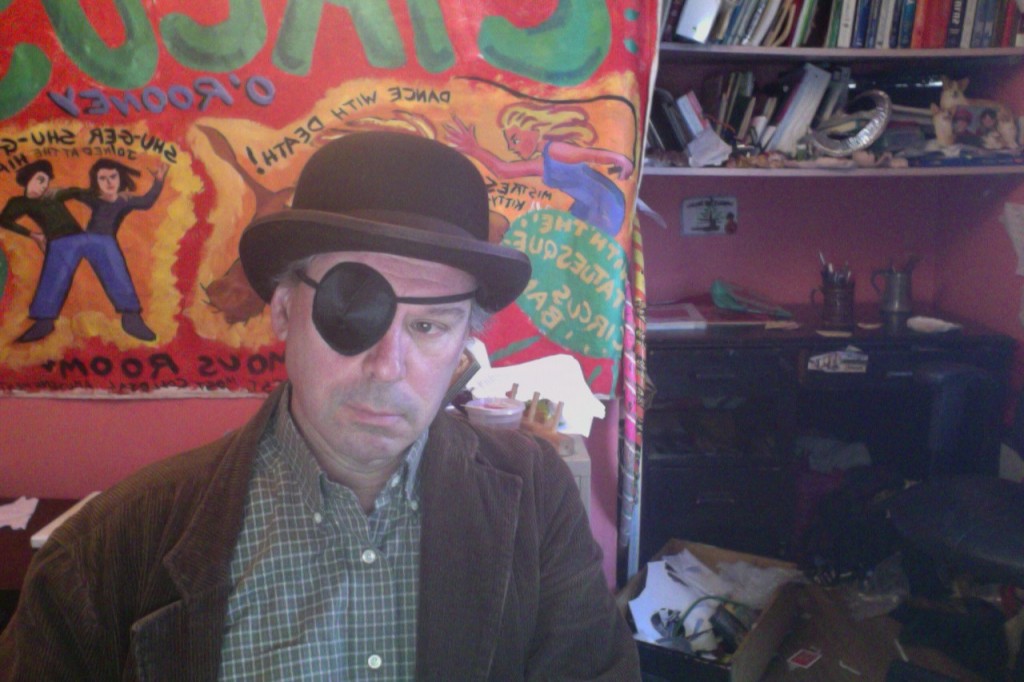 I’ve got a bloody eye. It’s called a subconjunctival hemorrhage, and I woke up with it on Saturday morning, as we were preparing to go to Massachusetts for a big extended-family Christmas party.

The condition brings no pain, and is not a harbinger of more dire conditions, so it’s easy to forget you have it. Until you go out and everyone says “Ewww, what happened to your eye?”

So I bought an eyepatch. How many opportunities do you get in life to wear an eyepatch?

Turns out that, to many people (or at least many of my relatives), wearing a eyepatch can be just as creepy as having subconjunctival hemorrhage. I got the same reactions and double-takes either way. I spent half the weekend wearing an eyepatch and half the weekend not.

Subconjunctival hemorrhages can take a week or more to go away. They’re like a bruise.

I had to go the theater this week. Twice. I took the eyepatch. It seemed the safer path, the more polite thing to do in public.

Except both of the shows had characters wearing eyepatches.

One was Peter Pan, in a new version by Dustin Wills (based on J.M. Barrie’s various drafts of the long-gestating original play and novel) at the Yale School of Drama. A boatload of pirates looms large in the second act.

The other was a repeat visit to Accidental Death of an Anarchist at Yale Rep. That show has TWO eyepatches. Steven Epp wears one to disguise himself as a forensics specialist. He also sports a wooden hand, and turns the bit into a tribute to Peter Sellers in Doctor Strangelove. The other patch is on the eye of Jesse J. Perez, as a police detective who’s been punched in the face by his superintendent.

I kept the patch in my pocket for both shows.

Different audience members, it has long been acknowledged, can see the same play in very different ways, from jarringly different perspectives. I remember being at a talkback at the Rep once where a woman couldn’t get over the fact that she had a couch in her home that was the exact same style as the one she’d just seen onstage.

I felt a little like that with my eyepatch. I liked the patches in Accidental Death of an Anarchist better than mine. Mine juts outward in the middle, with a pointy seam where the cloth joins up. It looks like an eye bra. Perez’s and Epp’s patches are smooth and large and comical.

They really caught my eye.