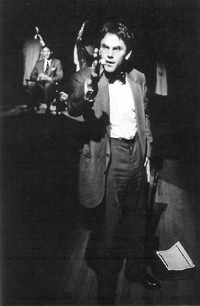 Also like last year, this is a season distinguished by writers and directors. That was the big marketing push last year, with poster quotes from the writers and directors for the world premieres of War, Familiar and Elevada. Such promotion would suit the 2015-16 season just as well. The season-opener, Indecent, is actually credited as a co-creation of its playwright and director.

Vogel has umpteen Yale connections: she has lectured at the Yale School of Drama for years, she chaired the school’s playwriting program from 2008-2012 and she’s been playwright-in-residence at the Yale Rep. I can also personally attest to what a champion she’s been of some of the student playwrights she’s encountered at Yale—more than once, she has stopped me on the street to tell me to check out a new talent via a student production that wouldn’t otherwise be on my radar. Vogel’s a major acknowledged mentor to Sarah Ruhl, one of the most-produced playwrights at the Rep.

But the Yale Rep hasn’t actually staged a Paula Vogel script since The Baltimore Waltz in 1993. She’s been much better represented at the Long Wharf across town, run by Vogel’s old friend Gordon Edelstein. The Long Wharf had world-premiere productions of both The Long Christmas Ride Home in 2003 and A Civil War Christmas in 2003.

What brings Vogel back to the Rep is Rebecca Taichman. The director has apparently reworked an already impressive show, then called The People Vs. The God of Vengeance, which served as her Yale School of Drama thesis project in 2000. Taichman was already hot shit when she came to Yale, having directed Peggy Shaw’s Split Britches show Menopausal Gentleman. She spent years developing The People Vs. The God of Vengeance as both writer and director, adapting the work from the classic Sholem Asch play (about a brothelkeeping couple who are trying to keep their daughter virginal and olbivious to the family business) and from court transcripts from when the entire cast of a 1923 English-language New York production of the play was prosecuted for obscenity.

Taichman is now one of the most reliable and forthright of regular Yale Rep directors, scoring hits with Iphigenia at Aulis, two David Adjmi plays (The Evildoers and Marie Antoinette) and this year’s world premiere of Danai Gurira’s Familiar. She has only grown in stature and skill since her maverick student years at Yale. The People Versus the God of Vengeance was already pretty darn powerful 15 years ago; it’ll be fascinating to see what Paula Vogel brings to this big-cast, multi-layered legal-drama-cum-ethical-epic. The show will be staged at the proscenium Yale University Theatre rather than the accustomed Rep stage, and is a co-production with LaJolla Playhouse.

Bordelon only recently graduated from the Yale School of Drama directing program, where her thesis project was Caryl Churchill’s Cloud Nine, her Carlotta Festival play was MJ Kaufman’s Sagittarius Ponderosa and her Yale Cabaret projects included Mary Laws’ This. and the Summer Cabaret production of Mary Zimmerman’s The Secret in the Wings. Jiehae is a well-known emerging playwright who’s been embraced/produced at all the right places: Playwrights Horizons, Soho Rep, Berkeley Rep, The Public Theater, the MacDowell Colony… Now she can add a Yale Rep world premiere to her resume. (A useful and amiable interview with Jiehae Park, on Adam Szymkowicz’s website, is here.)

Peerless is a comedy, about twin teenage sisters who “hatch a sinister plan” to make sure they get into the college of their choice.

Jan. 29 through Feb. 20: The Moors by Jen Silverman, directed by Jackson Gay.

Third world premiere in a row. Also the third Rep season in a row for Jackson Gay, the new-play whiz who directed Rolin Jones’ lavish, hysterical These Paper Bullets! in 2014 and is doing next month’s 2014-15 season-closer Elevada by Sheila Callaghan. She also had a profound Yale Rep hit in 2004 with Rolin Jones’ The Intelligent Design of Jenny Chow, which went on to a long New York run. (Jones and Gay were both at the Yale School of Drama in the early ’00s.) Jen Silverman has a play, The Roommate, at this year’s Humana Festival in Kentucky. She won the Yale Drama Series Award—a playwriting prize bestowed by the David Charles Horn Foundation that is not affiliated with the Rep or the Yale School of Drama—in 2013 for Still, a daring drama about various aspects of childbirth. According to the Rep press release, The Moors is about “Two spinster sisters—one desperately unhappy, the other resolutely miserable—[who] live with their elder brother and their mastiff in a gloomy, old mansion.” The play asks the dramatic question: “When a governess is summoned to their isolated home, teeming with secrets and desires, what price might they pay for love?”

Perhaps the most unpredictable of the more regular Rep directors, Yionoulis (who’s got official “resident director” status at the Rep and also teaches acting and directing at the School of Drama) has done a few classic writers at the Rep (King Stag, Ibsen’s Master Builder, Brecht’s Galileo) but only one Shakespeare (Richard II) until now. Cymbeline’s a great choice. There’s been a resurgence of interest in this admittedly weak Shakespeare script, and there was a fine student-directed Yale School of Drama production just a few seasons ago. Yionoulis has the sense of adventure, and the sense of humor, needed to do a credible Cymbeline. This is the woman who’s done such impressive light/dark balancing acts as Caryl Churchill’s Owners and George F. Walker’s Heaven previously at the Rep. Cymbeline will be staged at the Yale University Theatre, and will be this year’s “Will Power!” production, the one that all those middle- and high-school groups get bused to.

The season ends with Dianne Wiest starring as Winnie in Beckett’s famous play where an actress emotes while incapacitated from the waist down in a hill of dirt (or however a scenic designer interrupts Beckett’s “low mound” stage direction). I’ve seen some excellent celebrity Winnies in my time, including Estelle Parsons at Hartford Stage in 1998 and The Facts of Life’s Charlotte Rae in New York in 1990. Dana Ivey did it at the Westport Country Playhouse in 2010. A filmed 1979 version, directed by Beckett himself and starring Billie Whitelaw, is freely available on YouTube, here.

Wiest hasn’t performed at the Rep since she did Ibsen in consecutive seasons over 30 years ago: Hedda Gabler in 1981 and A Doll House in 1982. (You’ll read on a zillion websites that Wiest played Hedda at Long Wharf, but in fact it was the Rep. Wiest was apparently an ensemble member at the then-repertory Long Wharf for the 1969-70 season. There’s a reference in the April 6, 1969 edition of the Bridgeport Post listing her as part of the Long Wharf’s touring Connecticut Players company, which was doing a new adaptation of Little Red Riding Hood.)

When I was a kid, Beckett plays were done almost exclusively by experimental theaters, college theaters and Off Off Broadway. It always took major stars for his work to be seen in the mainstream, and that’s still largely held true for regional theaters today. (Think Brian Dennehy in Krapp’s Last Tape at Long Wharf). Beckett gets done relatively often at Yale, but at undergrad spaces and in the Yale Cabaret rather than at the Rep. Happy Days, a dream show for designers, deserves the big stage.