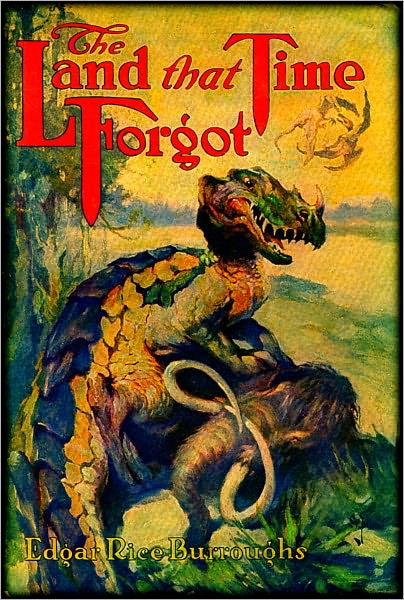 I collect audiobook misreadings. I listen keenly for the moments when a reader/performer (or “narrator,” as the genre has it) makes an obvious error in interpretation.

Thought I’d found an interesting one in the Audible audiobook rendition of the classic Edgar Rice Burroughs adventure novel The Land That Time Forgot.

The book’s about a bunch of Englishmen and Germans—sworn enemies since World War I is in full swing—lost at sea in a submarine. They find uncharted land that turns out to be inhabited by neanderthal men and pterodactyls.

Since much of the vessel’s navigational equipment has been destroyed, there are references to the hero fashioning a “crude sextant” and other “crude” tools.

But then comes this passagfe, at the beginning of Chapter 7:

About the 8th of September I accompanied Olson and von Schoenvorts to the oil-geyser. Lys came with us, and we took a number of things which von Schoenvorts wanted for the purpose of erecting a crude refinery.

This is “crude” as a noun, not an adjective. The next sentence is:

We went up the coast some ten or twelve miles in the U-33, tying up to shore near the mouth of a small stream which emptied great volumes of crude oil into the sea—I find it difficult to call this great lake by any other name.

The narrator says “crude refinery” as if it’s, you know, unrefined.

I smirked inwardly at hearing this, but then, moments later, darned if Edgar Rice Burroughs doesn’t comment himself on the potential pun:

On the edge of the lake we helped von Schoenvorts build his primitive refinery.

How rude of me to misconstrue the crudity.