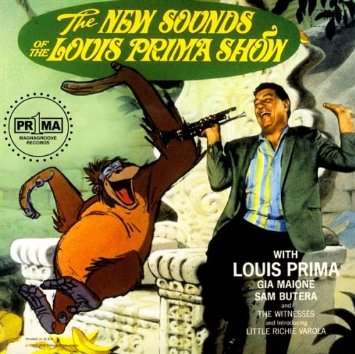 There’s a construct, commonly used in obituaries and “Critic’s Pick” blurbs, that drives me nuts.

I heard a good (bad?) example last week on a rerun of a 2006 BBC radio documentary about Louis Prima. “Nowadays,” the show’s host declares, “few people recognize Louis Prima. But say ‘King Louie from The Jungle Book’ and their eyes light up in recognition. In a way, it’s apt that he should be remembered so fondly. But it also sells him short, because in my opinion, Louis Prima was one of the great popular musicians of the 20th century.”

I think this is a ridiculous set-up. It uses the most mainstream and accessible image of a performer to suggest that most of their other work is unknown, unappreciated or forgotten. It’s a misleading shorthand to grab attention for your subject while appearing lofty and authoritative.

But it’s a ruse. The only thing selling Louis Prima short is that stupid radio introduction. In his chosen field, Louis Prima never went out of style. He may have died in 1978, but around the time that radio documentary was made, both Prima’s ex-wife and duet partner Keely Smith and his longtime bandleader Sam Butera were both still performing and keeping Prima’s name alive. A decade on from that time, there are still Prima tribute acts and theater shows. (The Wildest!—Hip, Cool and Swingin’: The Musical Sounds of Louis Prima & Keely Smith will have a monthlong run at the Seven Angels Theatre in Waterbury, Connecticut.) In his chosen milieu of nightclubs and casino stages, Louis Prima is still an indelible icon. People who haven’t heard of him are simply people who haven’t heard of him. There were people who hadn’t heard of him when Prima was in his prime. There are people today who have no idea who Harry Styles is. It happens.

In the “best known for” set-up, the “best known” part is invariably a movie. So what? One of the main thing that has always differentiated film from other media is its reach, its distribution, its staying power—the popularity of the medium itself. It’s generally the biggest, most far-reaching, long-lasting thing that a performer can perform in. So to say that most people recognize Louis Prima from The Jungle Book—or that most people recognize Judith Malina from The Addams Family movies, or Alan Cumming from The Good Wife—is simply stating the obvious: Most people know people from the most popular thing they’ve done. Theater and other live performances, ephemeral as they are, will always get the short end of that particular stick. To twist it into a statement about relative quality, or cultural justice, is a stretch.

Why wouldn’t most people recognize a performer from his role in a Disney movie? What’s bigger than a Disney movie? But certainly if you asked anyone with a sense of jazz history who Louis Prima was, they’d know. He composed the big band standard “Sing Sing Sing,” for starters. And it’s not like Jungle Book is some weird misrepresentation of what Louis Prima was or did. His cavorting as King Louie during the stand-alone “I Wanna Be Like You” number features Prima’s mannerisms, his vocals, his usual back-up band (Sam Butera and the Witnesses) and a gibberish duet—with Phil Harris, of whom I guess some shortsighted BBC host might say is barely recognized—“but say ‘Baloo from The Jungle Book’ and their eyes light up in recognition.” Phil Harris was a regular on The Jack Benny Show and had his own hit radio show, as well as being a big band leader. But you know what? When Disney released The Jungle Book, the company was chastised by critics for using well-known celebrities in roles which clearly resembled their best-known public personae.

Think of all the performers whose best work may well have been on the vaudeville stage: Will Rogers, The Marx Brothers, George Burns and Gracie Allen, W.C. Fields. It’s not just true of film. Think of pop stars and jazz artists whose live concerts overshadow anything they recorded in a studio. The construct there would be “although they were best known for doing something on film or record, they did essentially the same thing on stage, maybe better.” How demystifying.

Zero Mostel gets remembered from The Producers because we can go and get and watch The Producers anytime. Maybe if he’d starred in the movie of Fiddler on the Roof (or if the movie of A Funny Thing Happened on the Way to the Forum was way, way better than it was) then it might be a slightly different story, but only slightly. His stage performances were seen and praised by thousands, and scenes were recreated on the Ed Sullivan show. It’s not better or worse that he was a great live performer who also made memorable movies.

Then how about someone like Mike Nichols or Terry Gilliam, who were much more visible when they were performers but became better known as directors?

Would somebody right now say “You know Idina Menzel as the voice of the princess in Frozen, but did you know she also does Broadway musicals?” It would sound absurd.

There are so many ways that the “best known for, but…” construct makes no sense. George Bernard Shaw’s fame was certainly augmented by My Fair Lady coming from his Pygmalion. My Fair Lady was just about the biggest thing in popular entertainment in its time, and still endures, but who would say “His lines became songs for Audrey Hepburn and Julie Andrews, but Bernard Shaw also…”?

Better-documented work tends to have a longer shelf-life and thus more popularity. That doesn’t mean that we need to be reminded that Lily Tomlin did The Search for Signs of Intelligent Life in the Universe as well as Laugh-In (or The West Wing). Countless people have been transported by her stage work.

So it burns me when someone says “It’s a pity so-and-so is known for this movie and not for that  live show.” It’s not a pity. It’s not even true. They’re known for both. Depends who you ask. It’s cool to mention both without setting them against each other. Just so you don’t insult the intelligence of your audience by thinking we only care about Nathan Lane because he was in Nyquil commercials, or Louis Prima because he was in The Jungle Book. Because no matter how great they were in those things, they did other great things too.

By the way, Louis Prima starred in a movie with his then-wife Keely Smith. Hey Boy! Hey Girl! was released in 1959. I found the soundtrack album at a tag sale when I was a kid and it remains one of my favorite albums. It’s got kick-ass arrangements of Eddie Cooley & Otis Blackwell’s “Fever,” Joseph Kosma & Johnny Mercer’s “Autumn Leaves” and Hoagy Carmichael’s “Lazy River,” plus the outstanding originals “Banana Split for My Baby.” Only recently did I find a copy of the film. The acting is lousy, the pacing is off, the staging of the musical numbers is lame. The only thing that movie makes you want to do is see a real live Louis Prima club show, which is—truly—what Louis Prima was best known for. 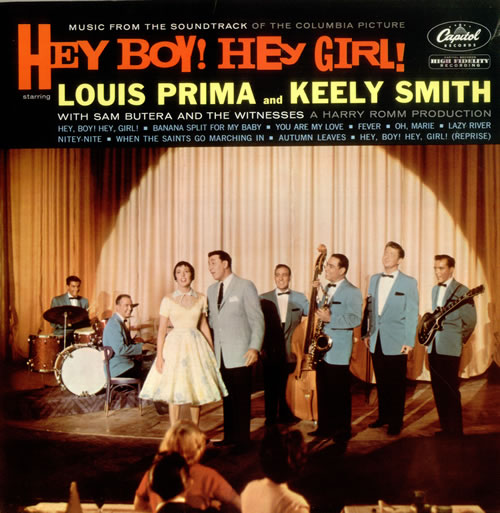