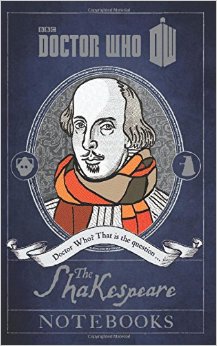 Here’s a book that my 12-year-old daughter Mabel and I both gravitated towards at the bookshop, from different time-and-space directions. Mabel has deep knowledge of dozens of episodes of Doctor Who, and knows a few Shakespeare plays very well. I’m the reverse. She loves a good Doctor Who trivia workout. I dig a well-wrought Shakespeare parody.
We both enjoyed Doctor Who—The Shakespeare Notebooks. From our separate vantage points we both appreciated the lengths which this anthology goes to explain its existence in its preface. Among other things, it notes:

We have obtained the rights to the original Notebooks put together by William Shakespeare in late 1599 and kept updated until his death—the scrapbook in which he documented the impact of the “doctor” on his life and work. It is a strange collection of writings, snippets and musings. … This special edition of The Shakespeare Notebooks presents material not only from the Notebooks themselves, but also from a variety of other contemporary and more modern sources. For the first time, we bring togehter other material that would seem to have a direct bearing on the mysterious “doctor.”

So the conceit is that the Doctor manifests himself in the middle of Shakespeare’s writing, either appearing as a strange, unexpected character (one of the hired murderers in Macbeth, for instance) or becoming the subject of odd drafts of bits from As You Like It (“The cosmos is a stage, and all, from thou to Fenric, merely players”) and other plays.

This book-length game is extended further than you’d expect. There are parodies of less widely known scripts such as Cymbeline, Pericles, The Winter’s Tale, Troilus and Cressida and Timon of Athens. There are sonnets. There’s even a mysterious scene called “Master Faustus” that is clearly derived from Marlowe’s Doctor Faustus but somehow ended up in Shakespeare’s Doctor notebooks. Likewise, the Doctor Who references span ten of the eleven known Doctors plus a variety of their travel companions. The authors (that is to say, Shakespeare) is given plenty of space to delineate these different Doctors and demonstrated how they are best suited to the dramas at hand.

There are also some very weak epigrams scattered among the larger extracts:

• A Rose by any other name would still be Tyler.

• Double, double, toil and trouble
If we are caught in a time bubble.

• Doctor Who? That is the question.

The longer passages are generally much cleverer than these foolish morsels. “The Dream” is an extensive ten-page Midsummer fantasy in which “a group of War Goblins” are in the woods rehearsing their play, “The Most Glorious Defeat and Most Deserv’d Death of the Trifling Rutan Foe at Fang Rock,” when one of the troupe—Stombot—gets magically transformed into a Rutan. Not only is this a decent attempt to parody something that’s already ridiculous (Shakespeares’ Rude Mechanicals and their Pyramus & Thisbe show) but it does so by utilzing two vintage Doctor Who storylines. The framing device concerns the travels of the First Doctor (William Hartnell, circa 1963) while the play-within-a-play evokes The Fourth Doctor (Tom Baker, who played the role from 1974-1981).

There’s theater geek/ sci-fi geek crossover appeal here. Doctor Who fans and Shakespeare fans seem to share a need to show off their special knowledge whilst lampooning these classic works they so admire.

It should be said that William Shakespeare has met several different incarnations of The Doctor on the BBC television series, and the two cultural icons have also crossed paths in Doctor Who podcasts, comic books, short stories and fan fiction. This book evens the score somewhat, having Doctor Who encroach on Shakespeare’s turf for a change.

In any case, Mabel and I both blew through this amusing more-than-trifle in an evening or two, and enjoyed sharing the best jokes. She explained some of the Who references to me; I filled her in on the theater stuff. As we will. 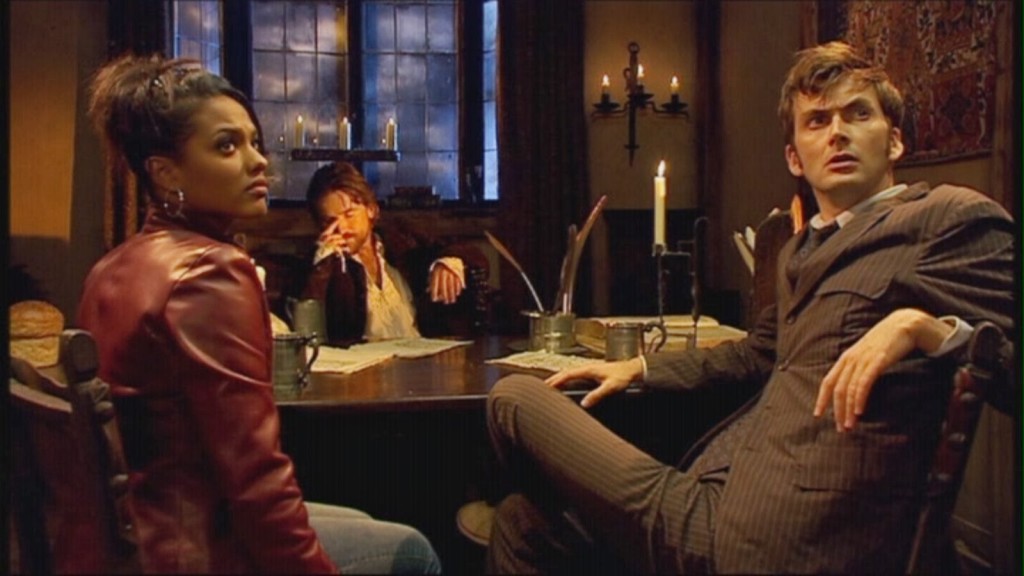