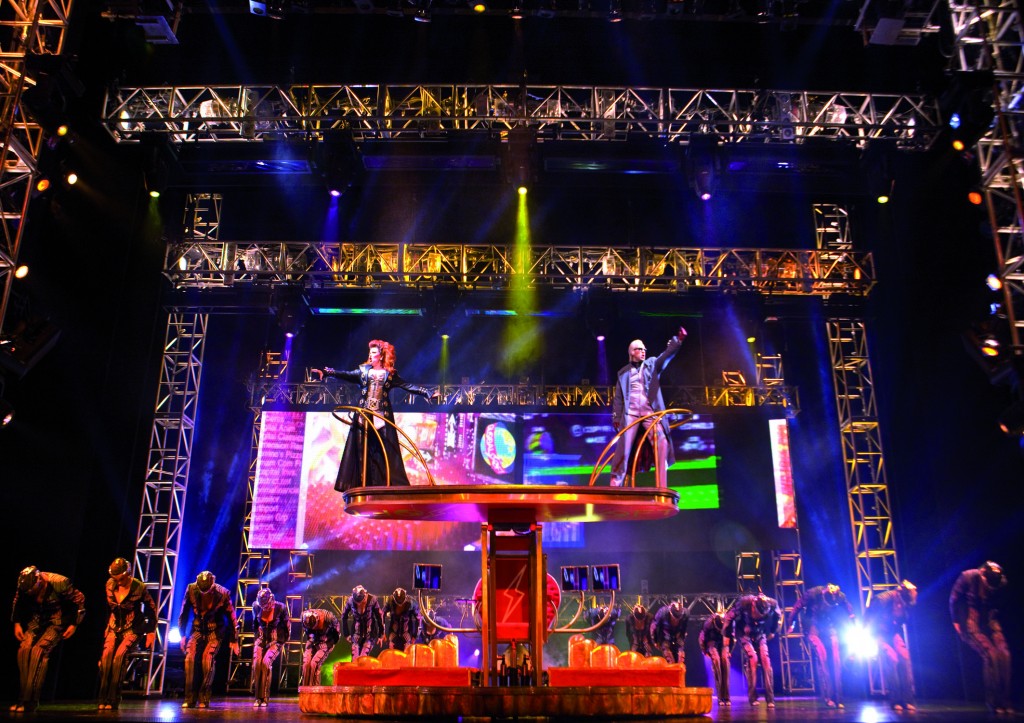 To some it’s a buddy, making a big noise. To others, it’s a bloody-faced big disgrace. We shall see, We Will Rock You, we shall see.

Among bands whose music has transcended whatever pluses or minuses might be calculated from all its diverse fan bases, Queen is right up there with The Beatles and Abba—both of whom, by the way, have done rather well in the musical-theater racket.

One thing’s for sure, We Will Rock You is  kicking its can all over the place. The show’s North American tour pulls into the Shubert in New Haven tomorrow night (Friday, April 25 through Sunday the 27th),  just as the original London production has announced that it’s closing after an astounding 12 year run at one of the largest theaters in the West End.

Sure you’re curious. This is a show that’s experienced intense popularity in Europe since 2002 yet has yet to come to Broadway. A 2004 U.S. tour, which had Connecticut on its itinerary, was cancelled before it happened. This tour, which kicked off in Baltimore last October, is reportedly testing the waters for a New York run. We Will Rock You’s only previous U.S. theater production of note was in Las Vegas a decade ago. In other countries, it’s toured freakin’ arenas.

What may give you pause is that the show has characters named Scaramouche and Galileo Figaro, from the lyrics of “Bohemian Rhapsody,” and Killer Queen, from the song of the same name. Say what you want about Mamma Mia, but it was a pre-existing play script fitted to Abba songs; that show’s creators didn’t feel the need to create characters named Fernando or Super Trouper, and didn’t pretend that individual pop songs were sketches for a larger, connected opus.

On the other hand, if you are going to take the risk of turning your songs into sections of a futuristic mythos, get Ben Elton to write it. Elton wrote for the classic BBC sitcoms Black Adder, The Young Ones, Mr. Bean and the cop comedy The Thin Blue Line. He’s an award-winning mystery novelist. He played Verges, the constable’s sidekick, in Kenneth Branagh’s film of Much Ado About Nothing. He’s had several plays in the West End and released two albums of his stand-up comedy. Besides We Will Rock You, his musical theater work includes the book & lyrics for Andrew Lloyd Webber’s The Beautiful Game and the Phantom of the Opera sequel Love Never Dies, not to mention a whole other jukebox musical, Tonight’s the Night (built from Rod Stewart hits).

As for Queen, the band’s original line-up ended with the death of Freddie Mercury in 1991. Founding bassist John Deacon has played with his old bandmates since 1997. But guitarist Brian May (who played the Palace Theater across the street from the Shubert in New Haven in 1993)

and drummer Roger Taylor have been heavily involved with the show throughout its history. Both May and Taylor have made numerous surprise appearances onstage at the London production, and both these surviving Queen members have had a say in how the show is cast.

In the November 2013 issue of MOJO Music Magazine, Queen drummer Roger Taylor is interviewed by Mark Blake and this astute question is posed:

MOJO: Despite a critical panning, We Will Rock You is on its eleventh year in the West End. But can you understand why the idea of a Queen musical is still a hurdle for a lot of rock fans?

Taylor: Yes. And I’m glad it’s still a hurdle for rock fans, because it’s a hurdle for me to go to any musical. I tried Les Miserables, and I thought it was the worst thing I’d ever seen and heard. I’m part of the auditioning process for We Will Rock You. There are some great singers in the show that’s what I’m involved in—the music and the performances. We Will Rock You is different from Mamma Mia. It’s more rock ‘n’ roll. The story is [long pause] slightly crass. But I think it has its good points. I do have an aversion to musical theater, so it hasn’t been easy, but I’ve learned to live with the musical.

Later in the interview Taylor opines “when I’m at We Will Rock You and I see that the average age of the audience is 16, then that means we’ve done our job. I want our music to be on the radio and to be everywhere. I don’t want Queen’s music to just be on some piece of vinyl from the ‘70s.” The drummer also notes, when asked what the late Queen frontman Freddie Mercury would have thought of We Will Rock You, that “Oh, he would have loved it … People who think he’d be turning in his grave about We Will Rock You just don’t get him.”

Previous Post: “Did you not name a tempest, a birth, and death?”
Next Post: “Speak, Mephistophilis, what means this show?”