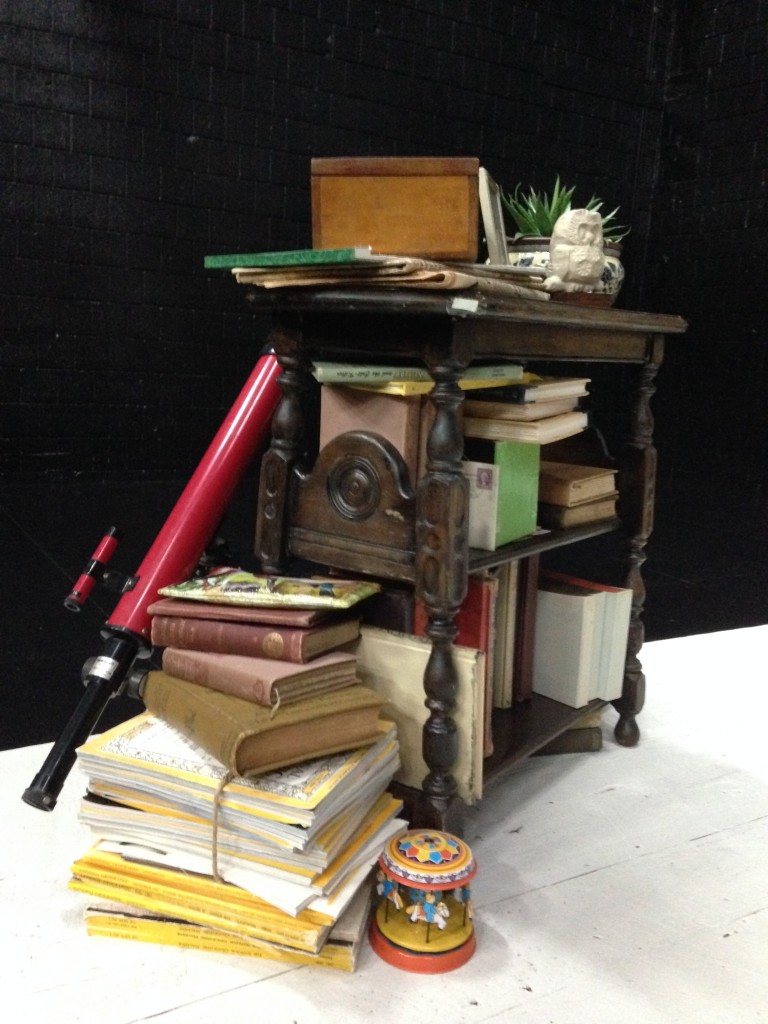 I’m the kind of person who, when invited into someone’s home, will unabashedly stare at their bookshelves.  I’ll browse books for as long as it takes to get a sense of their greater meaning—their collective power, what they say about their owner or about the place in which they reside.

I was allowed to do that Monday morning on the set of The Shadow of the Hummingbird, the world-premiere Athol Fugard drama which concludes its run this weekend. 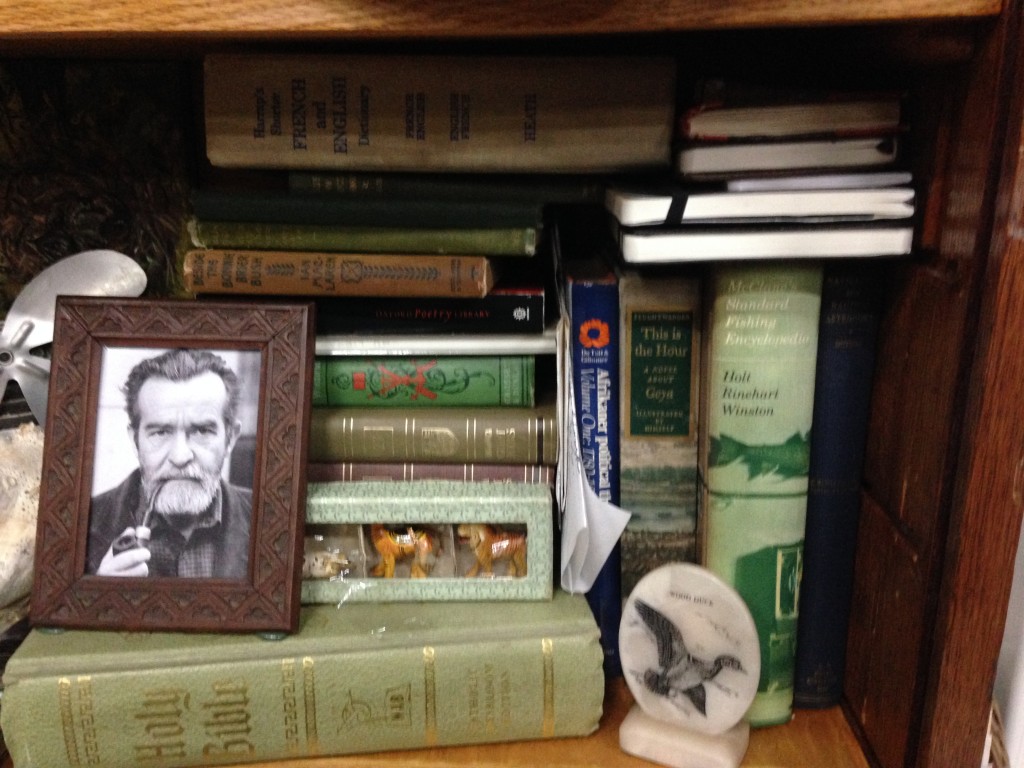 The set shows a writer’s workspace. It was designed for Long Wharf by the great Eugene Lee (a master of scruffy, busy, practical environments, from Saturday Night Live to the movie Vanya on 42nd Street and dozens of Broadway and regional stage creations) and contains several large bookcases. These bookcases in turn house hundreds of books, and are also chockfull of tchotchkes such as garden gnomes, busts of famous writers and fishing apparatus. 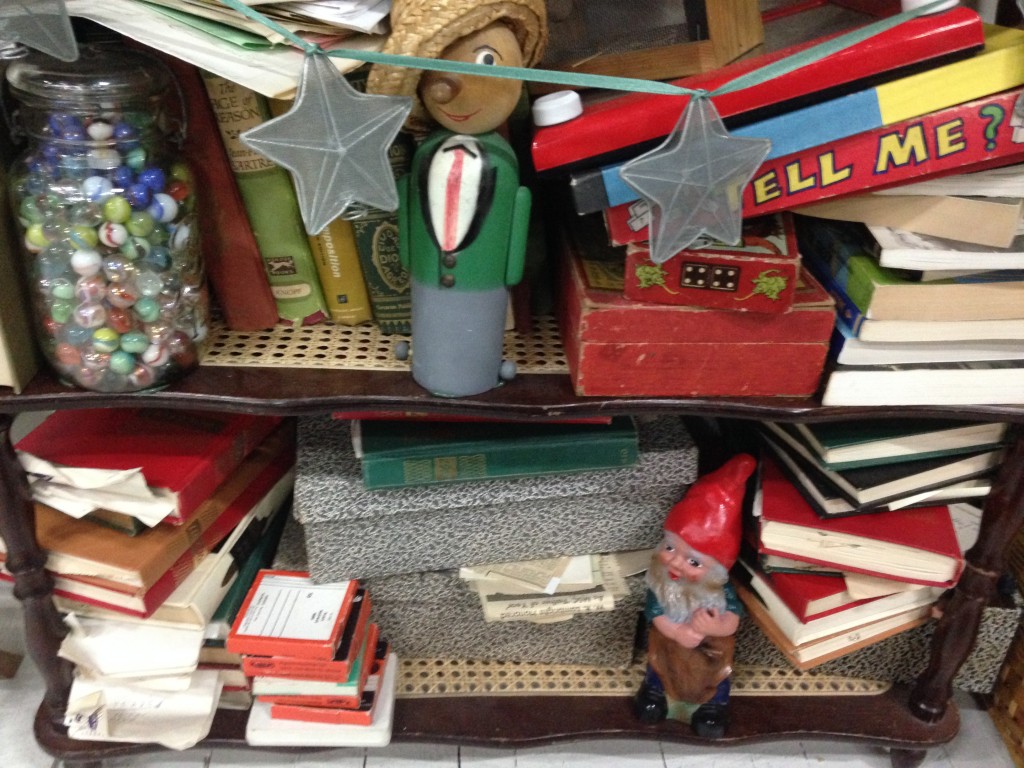 There are books all over the floor as well. 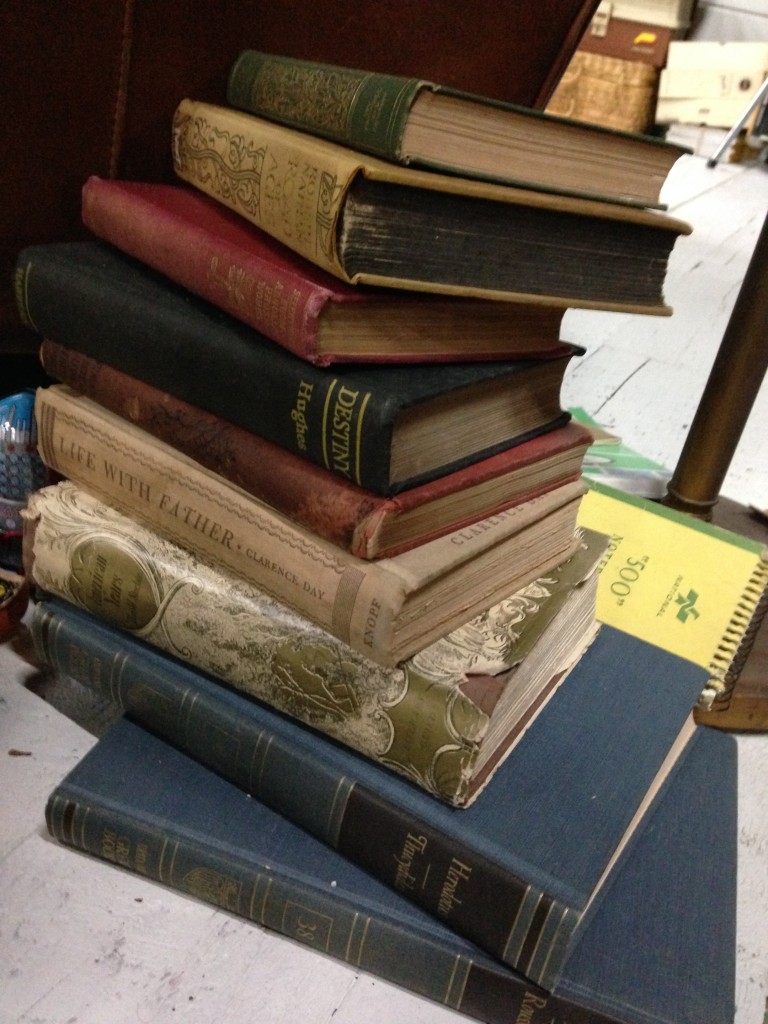 Books are a window into the soul. Athol Fugard’s play, enjoying its world premiere in a splendidly focused production that stars the playwright himself as a doting grandfather passing wisdom down to his bright-eyed grandson, is full of soul. Lee’s set does not have windows, but it does have books.

When I saw Shadow of the Hummingbird on its opening night a couple of weeks ago, I instantly gleaned, just from seeing a couple of stray tomes artfully scattered at the edge of the stage, that the set’s books had special significance and weren’t just random prop-shop items. I glimpsed, for instance, one of the published volumes of Athol Fugard’s journal essays—more than an in-joke, in a show which opens with Fugard himself reading from his old journals. 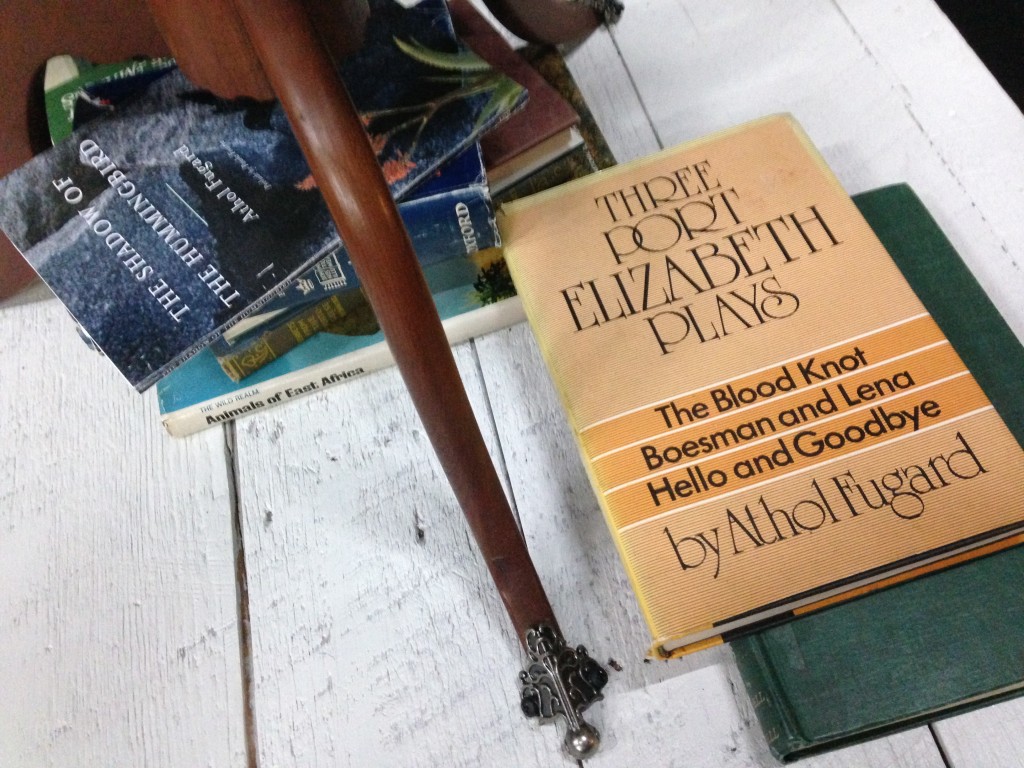 How much of The Shadow of the Hummingbird corresponds directly with Fugard’s life and how much of it is fictional is being roundly debated, by audiences and behind the scenes at the Long Wharf. This short play has been supplemented with an “introductory scene” compiled by the playwright’s partner Paula Fourie, where Fugard literally reads aloud extracts from his journals. The scene has a different pace than the old man/young boy dialogue which follows, and is more concerned with clarity and tone-setting than it is with character development. The main play also indulges in good old-fashioned melodrama, with life-and-death twists and turns to drive home its messages of mortality and transcendence.

Jackie Farrelly, the Long Wharf’s Properties Manager, was charged with stocking the stage with actual books. Input was sought from both the playwright and the set designer.

“Athol gave us a list of books he believed this character would have,” Farrelly says. “This character is not so far removed from our friend Mr. Fugard.”

The identity of the elderly man imparting a lifetime of wisdom on the Stage II stage was of obvious concern to those who dressed the set. “We thought it was Fugard in the play,” Farrelly says, “so we requested diploma to hang on the wall. But Fugard said it wasn’t him.” The playwright offered a pseudonym of sorts—”Draguf Lohta,” which happens to be his named spelled backwards—and the theater had fresh documents printed up. 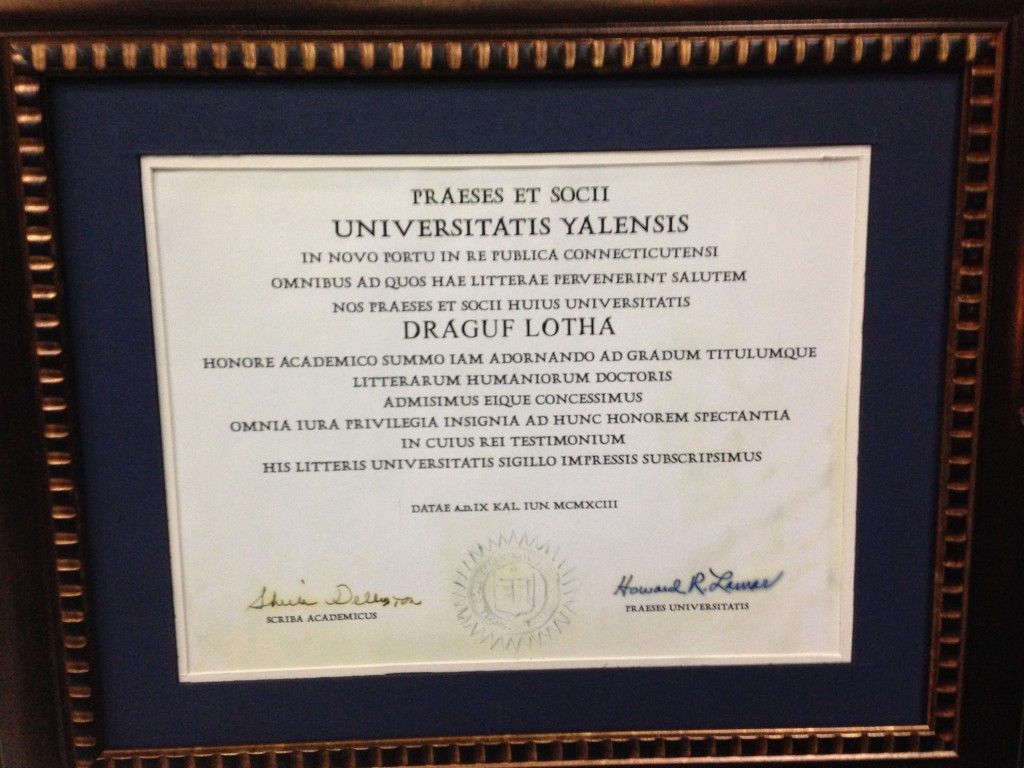 There are journals and compostion books scattered throughout the stage, but those are actual props and not Fugard’s real journals.

As for that list of authors, as told to the play’s director Gordon Edelstein then distilled into a one-page sheet for Farrelly, here it is: 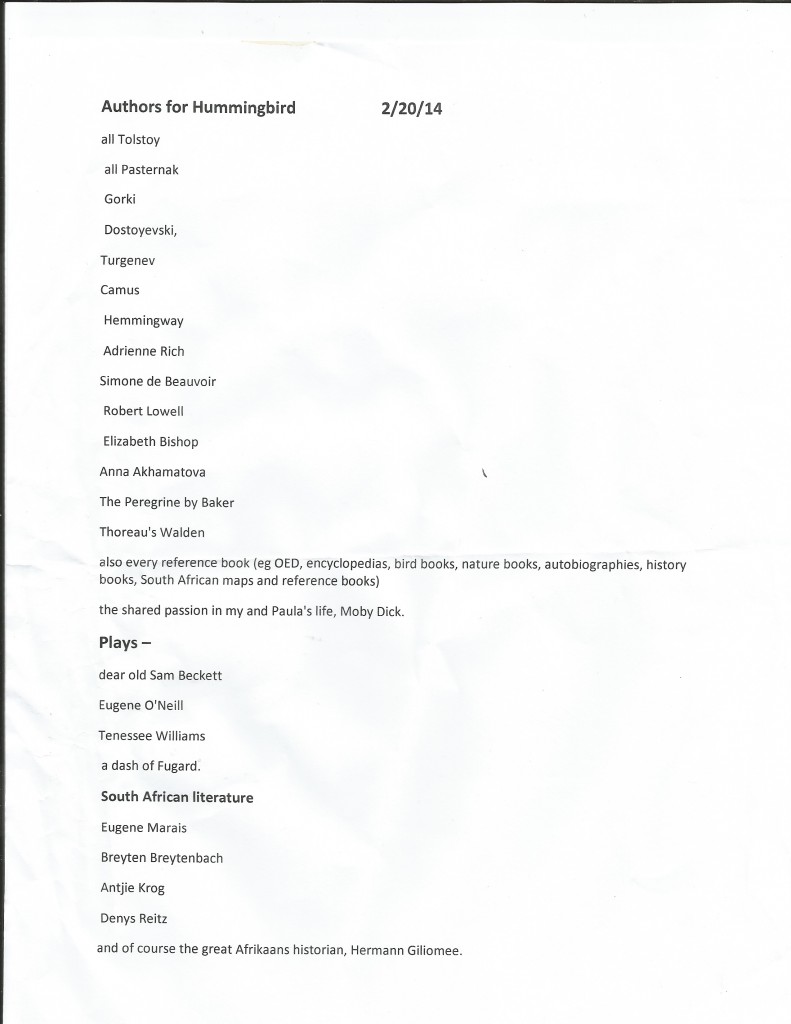 Those titles definitely define what’s on The Shadow of the Hummingbird’s bookshelves.

But there are decided differences. There are books on both sea fishing and flyfishing, though Fugard is apparently exclusively a flyfisherman and does not fish from boats. The boating references (including a wooden model of a boat after the door of the study set) reflect the interests and aesthetic input of Eugene Lee. 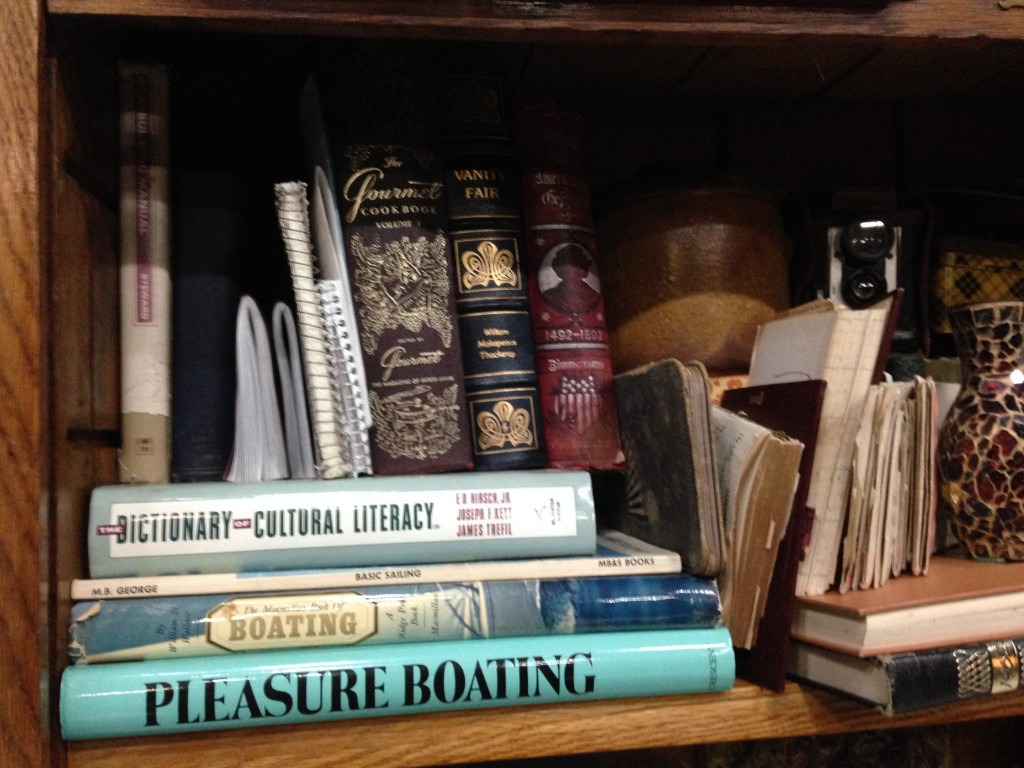 There’s also a lot of Dickens, an author not specifically requested by Fugard. There’s a large collectible edition of Vanity Fair which is so prominent on a central bookcase that keen-eyed audience members can read its title from their seats. (The inclusion of The Dictionary of Cultural Literacy, by right wing firebrand E.D. Hirsch, seems inadvertent and one of the few poor choices in this otherwise on-point collection.)

“There are multiple things that are mine,” Farrelly confides, “and Eugene’s.” None of the numerous non-book knick-knacks, for instances—Chinese checkerboards, a container of small plastic toys—are Fugard’s.

Yet everything fits the mood of a long life well written-about. “Gordon said he wanted Athol to be comfortable in every sense of the word,” Farrelly says.

Guess it worked. During rehearsals, “he would go through the shelves, find those books and get so excited.”

Farelly told me there are four separate copies of Moby Dick on the set. I found three of them: a standard late 20th century paperback edition that you might be given in high school, a larger more college-friendly trade paperback, and one geared for younger children, with an adventure-themed cover.

The only book requested after rehearsals began was a Holy Bible, due to a statement in the script that “the cookies are under the Bible.”

Even the top drawer of the writing desk at which the writer sits for a portion of the play is detailed, though its items can not possibly by seen by the audience. In the drawer are an array of small bits of metal, the kind that fall off typewriters or other old machines. There are also pencils, a jaw harp and a typewriter ribbon. Finally, there’s an “emergency” copy of the final pages of the script, which Fugard has not needed to access.

The desk previously appeared in the Long Wharf’s production of My Name is Asher Lev, and will be featured later this year in Eugene Lee’s set for the Long Wharf’s last mainstage show of this season, Jason Robert Brown’s musical The Last Five Years.

Back to the books. 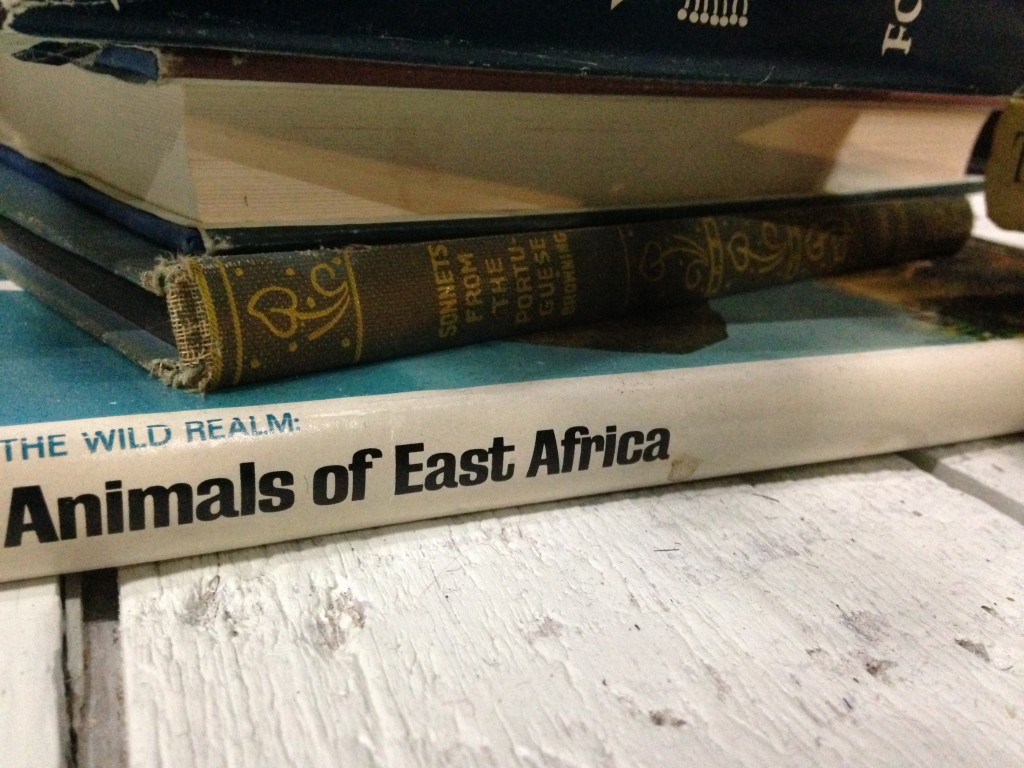 The following is not a complete catalogue of what’s on the shelves and floors, since I treat theater sets as if they were shrines and would not consider turning around a book whose spine was facing the wrong way or was hidden by another prop or was otherwise unidentifiable. Since “dear old Sam Beckett” is listed at the top of Fugard’s list of plays that should be represented on the shelves, I was surprised not to find any, but suspect they are among the several groupings of thin paperbacks whose titles I could not read; some of them certainly looked like those familiar Grove editions.

Some titles I didn’t bother to scribble down, since they’re clearly visible in the photographs.

ON THE BOOKSHELVES ALONG THE BACK OF THE SET

Blatter und Blitten (Max Reger, in two different editions, right next to each other)

Treasury of A. W. Tozer

Adventures of the Greek Heroes

Gone With the Wind (Mitchell)

A Remarkable Mother (Jimmy Carter’s memoir of his mom)

Bondage of Opium (biography of Coleridge by Molly Lefebvre)

Lord of the Flies (Golding)

Up Against the Fences—Poverty, Passion and Privilege

Country of My Skull—Guilt, Sorrow and the Limits of Forgiveness (by South African writer Antjie Krog)

Down to My Last Skin (more Antjie Krog, poems this time)

The Oiling of Felix and Other Poems (Henry van Dyke) 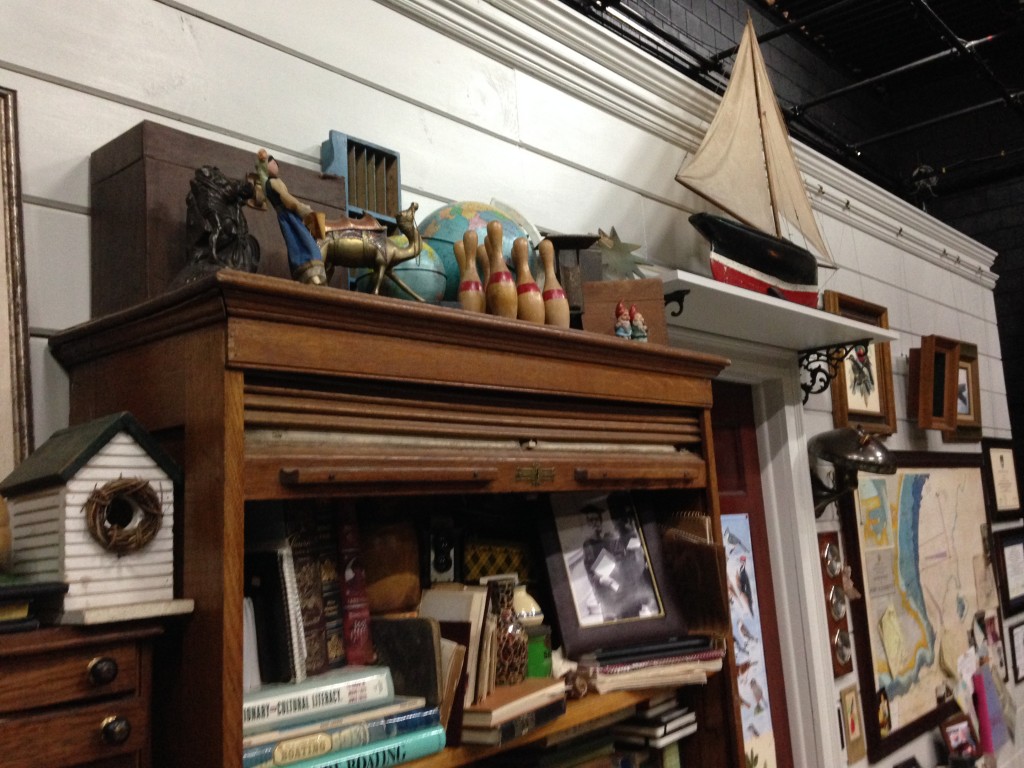 The Bedford Handbook for Writers

ON THE END TABLE

A selection of kid’s books, including several Lemony Snickets (the A Series of Unfortunate Events series) plus

The Life and Distinguished Service of William McKinley

and a stack of National Geographic magazines

ON THE TABLE NEXT TO THE ARMCHAIR

Immortal Poems of the English Language

Maxwell and Smith’s Writing in English

Only a fraction of these titles were expressly requested by Fugard, as we’ve learned. Many were discards and book-sale donations purchased in bulk from the North Haven Public Library. Some are from the Long Wharf prop shop. But almost none seem out of place in this writer’s workshop of a set. The type of books which clog many a cluttered stage set (not to mention an ill-kept used bookstore or poorly managed library—cookbooks, self-help books, coffee table books, trashy novels—are not to be found. No filler. Just lots of good readin’.

A point of pride for Farrelly was Fugard’s delight in one of the internet acquisitions she’d made when searching for South African titles: Versamelde Gedigte by C. Louis Leipoldt. “I didn’t know this when I ordered it, but it turned out to be this controversial book that inspired a lot of activists in South Africa. 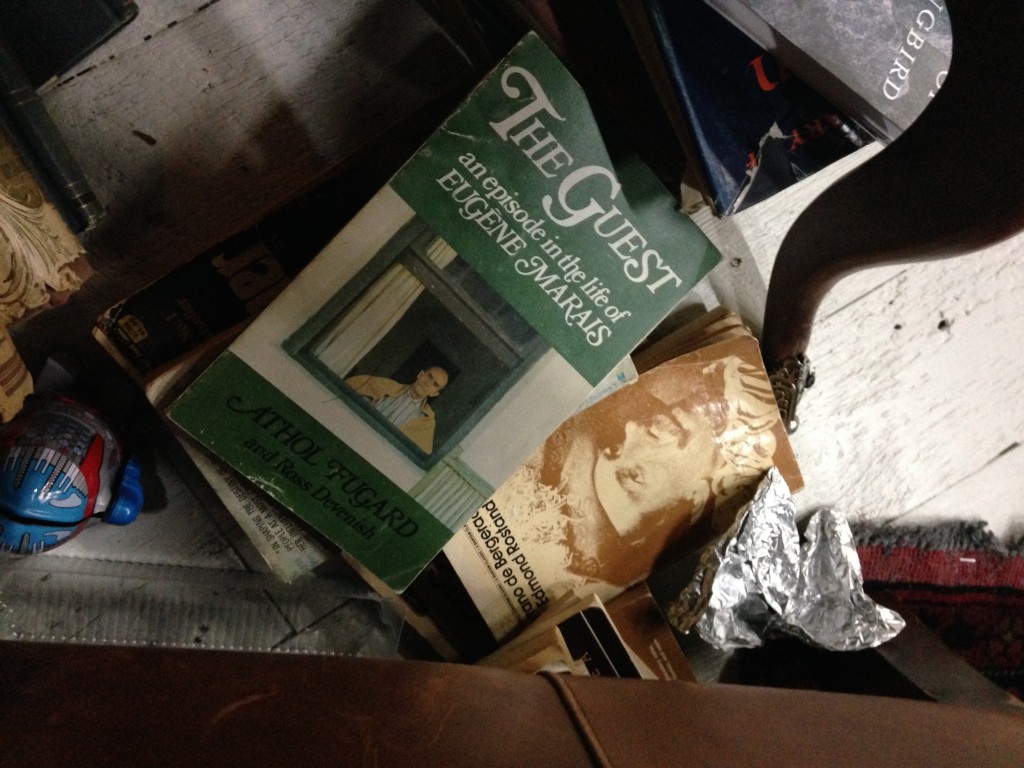