But wait, where do you go? Pray, do come back!

Most typical this is. O wretched fate,

To be deserted by my friends most dear.

These human beings care but little for

Us droids who ever serve with loyalty.

Thus shall I end my days within this base,

A frozen remnant of the rebels’ stay

On Hoth. Belike one day explorers shall

Discover this defeated base, shall dig

Into its core and find a golden droid

Whose final resting place was ice and snow.

“Who would abandon such a lovely droid?”
No doubt this shall be their response when they

Espy me here. “What wretched humans would

Leave such a one as this alone to rot?”

I shudder at this thought, let it not be!

O open up your hearts unto my kind,

Then open wide this door for kindness’ sake!

—The Empire Striketh Back by Ian Doescher (Quirk Books, 2014).

The scribe tries way too hard to force the dialogue from the George Lucas films into the appropriate Elizabethan scansion, and he misses some big  opportunities to really unite these universes by say, accessing Shakespeare’s history plays as a way of understanding the power plays that led to the Death Star.  But, lightweight as they may, you have to marvel at Doescher’s perseverance and consistency. And the Shakespeare’s Star Wars books should be bought for their covers and illustrations alone. 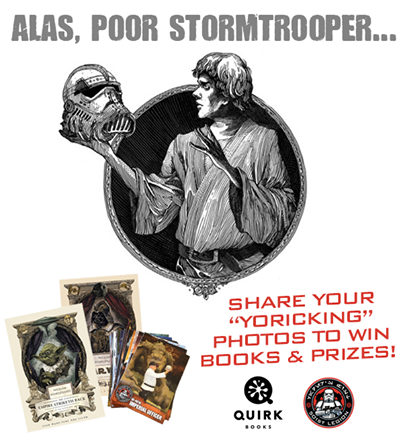