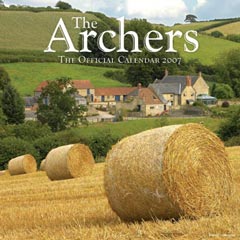 Did an item earlier on BBC Radio 4 Extra, which is celebrating the National Theatre’s 50th anniversary with a series of broadcasts of some of the theater’s most important productions. Over on BBC Radio 4—sans “Extra”; Radio 4 is the BBC’s station for drama, spoken word, comedy, documentaries and public affairs programming.

One of the longest running soap operas, on the BBC or elsewhere, is The Archers. I personally haven’t missed an episode in well over a decade. It helps that each week’s six 15-minute installments are lumped into a Sunday “Archers Omnibus,” and that the show can be subscribed to as a podcast.

(The Archers, due to a controversial period in the ’50s when the show killed off a major character, was the inspiration for Frank Marcus’ comedy The Killing of Sister George, which the Long Wharf Theatre revived last season.)

Nearly every year around this time, The Archers begins an extended storyline about the villagers of Ambridge (a made-up farming town in the English midlands) putting on their annual Christmas show. These shows are invariably directed, and ruined, by the exasperating know-it-all snob Lynda Snell. They have ranged from traditional holiday “pantos” to multi-act dramas.

Last year’s big Ambridge production was a scenes-from-Shakespeare revue, saved from insufferable pretentiousness at the last minute when the cast engaged in antic improvisation. Another year, the backstage plot revolved around whether the local fire marshall would sign off on a rather unwieldy set design.

This year, the show looks to be Robin Hood, which Snell hopes to cast with older actors in the spirit of the Sean Connery/Audrey Hepburn film Robin & Marian—and in the spirit of Ambridge, a town where even the teenagers seem old.

The holiday-show storyline is only just getting started, working its way in between the renewed romance of Tom Archer and Kirsty Miller and the distressing breakup of the affair between Tom’s sister Helen and Rob, the guy running the big factory-milking operation for Brian Aldridge.

Listen to, and learn more about, The Archers here. A fan club for the show is here.