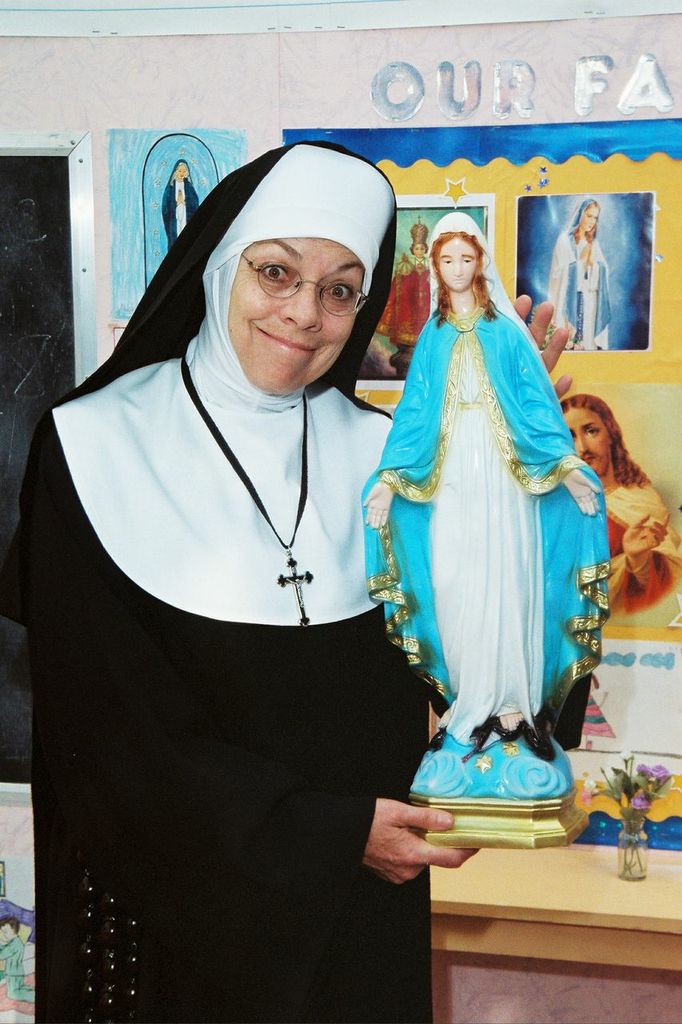 Sister—and more importantly, Nonie Newton-Breen as Sister—is returning to Long Wharf Theatre Stage II, December 4-15. It’s been two and a half years since she last appeared in the city, which she’s been visiting on and off for a decade now.

This humble blog is mentioned in the Long Wharf press release: “The New Haven Thetre Jerk blog describes Newton-Breen’s improvisational skills as ‘heaven-sent.’” Indeed, I’ve seen the Second City veteran Newton-Breen in several different Late Nite Catechism shows here in New Haven over the years and am much impressed with her ability to ad-lib snappy one-liners, introduce local content to the proceedings, and most importantly maintain consistency with audience-interactive show that could easily descend into utter chaos without such a strong and unflappable Sister at its helm.

The Late Nite Catechism this time is the fourth installment in indomitable series originally created by Vicki McQuade and the original “Sister” Maripat Donovan. (The pair severed their partnership years ago, with each continuing to do their own Late Night Catechism productions. Donovan’s masterminded most of the sequels. This one’s co-written by her, Jane Morris and Marc Silva.

Sister’s Christmas Catechism—The Mystery of the Magi’s Gold. It’s the one which veers the furthest from the series’ main conceit (that this is an actual nun giving adult students a refresher course in Catholic lore and ceremony). Sister’s Christmas Catechism descends into a trendy parody of the CSI forensic-science TV shows. At least it might have seemed trendy when the show was first presented seven or eight years ago.

The saving grace, as always, will be Nonie Newton-Breen. For tickets ($35) and details (there’s a sing-along carol element), visit www.longwharf.org