Ever seen a production of A Midsummer Night’s Dream and wished the Mechanicals scenes weren’t so disconnected from the rest of the play? Ever thought Bottom or Puck were having way too much fun in contrast to the disconsolate other characters, or that the magic spells were just too darn convenient? Ever noticed that, in the wrong hands, structure and and stylistic continuity and tone and pacing and linearity of this magical play go right out the window?

Questions like those are seemingly what this summer’s Yale Summer Cabaret troupe asked before they even began cobbling together this clever, precocious, provocative new perspective on Shakespeare’s great fantasy comedy/romance. Their Midsummer wants to solve puzzles and create new ones. It uses our familiarity with Shakespeare’s play (and some of his other ones) as a jumping-off point for a multi-faceted frolic in the forest.

Not to unleash spoilers, but suffice to say that the Bottom here isn’t that much of an ass. He’s played by Andrej Visky (who’ll be directing the SumCab adaptation of Marlowe’s Doctor Faustus later this summer) in his appealing native Romanian accent. Visky’s Bottom is a bit of a boor, a tad insecure, somewhat directionless. It’s nice to see some uncommon paths being trod with this character. 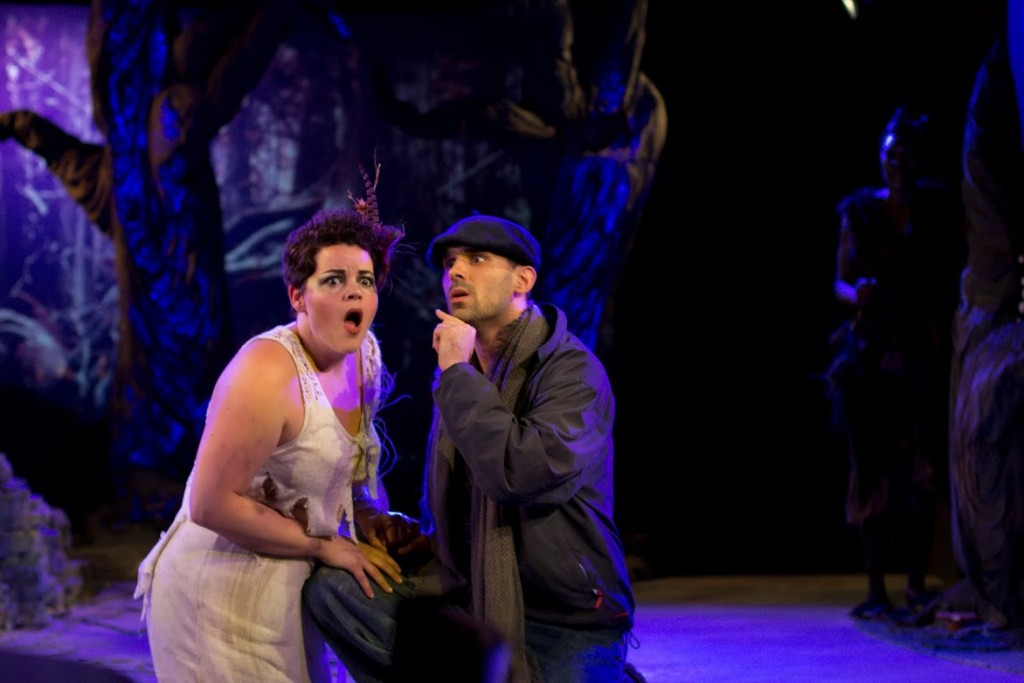 Throughout Midsummer, the company makes some fresh assumptions about the play, and builds from there. Sometimes these are logical conclusions that most directors simply don’t want to explore. Like, aren’t woods creepy?; who says woods are bright and glittery? Christopher Thompson and Claire De Liso’s forboding set design is augmented by an earthy, woodsy, feral Puck. This Puck is played by Shaunette Renée Wilson, star of Liz Diamond’s exceedingly well balanced and carefully thought-through production of Brecht’s Caucasian Chalk Circle at Yale Rep this past season. Midsummer is not as neatly calibrated as CCC was, and Wilson finds herself out on her own with a dour, spiteful take on Puck, but until Oberon makes an appearance (as a character within a character) she must carry all the magic and mystery and majesty and animosity of the forest gods single-handedly. It’s a brazen, appropriately wild performance, but one which doesn’t always jibe with the more upbeat contemporary style taken by the rest of the cast.

The SumCab has used the overused word “remix” to describe their process here, and for once it fits. Bits of the play are scattered and overlapped and shown out of sequence, and then lines from just about every other play in the Shakespeare canon are added. That includes greatest-hits such as “Get thee to a nunnery” and “the better part of valor is discretion” “If music be the food of love, play on,” but also such obscurities as “enchantress, hold thy tongue” from Henry VI Part I. 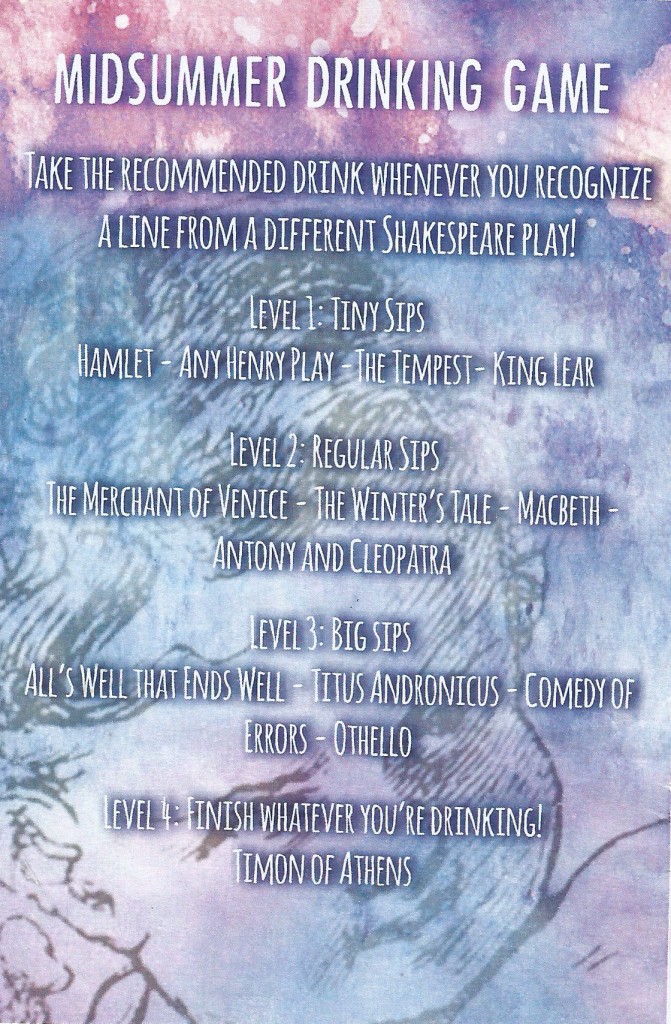 Other bits are just stressed and may get appreciated for the first time. The Mechanicals make sure the audience gets Shakespeare’s pun on “Ninny’s Tomb” (Ninus’ Tomb). Helena’s loud cry to Demetrius that “I am your spaniel!” takes on S&M overtones.

The most audacious interpretive interpolation here is having the performance of The Rude Mechanicals not be about Pyramus and Thisbe and the Wall and the Lamp and the Lion, but rather about Lysander and Hermia and Helena and Demetrius, with a separate strand of spirit-possession centering on Oberon and Titania. The roles are assigned in customary Mechanicals fashion (oh, how young university-trained actors like to make fun of bad acting techniques!), then take on a more strident, full-bodied manner once the magic in the forest overwhelms.

This daring move of upending the comic setpiece at the end of the play, and using it instead to frame some of the drama’s heaviest scenes, turns A Midsummer Night’s Dream inside out, and not just in the obvious layered play-within-play sense. Enveloping the romance within the other elements changes the whole order of  things, opening with comedy (and yes, much of this production is very funny ha-ha, not just funny strange) and then veering later into the love triangles and love rectangles of Hermia, Lysander, Demetrius and Helena.

The actors—just seven of them, each of them essaying one Mechanical and one lover or deity, with Bottom being only Bottom and Puck being only Puck—dress in contemporary garb like parkas and glasses and silk bras, and offer some occasional bursts of modern dialogue to the Willful remix. When Bottom wanders in the woods, he sings Sinatra’s “My Way.” When someone mishears the scripted line “Farewell” as “Stairwell,” Peter Quince the director shouts “Stairwell?! Why would it be stairwell?!”

It’s nothing special to announce that this is an unconventional Midsummer Night’s Dream. Honestly, I can’t remember the last time I saw what might be called a “conventional” one. But so many productions of the place are director- or designer-driven, such as the similarly dark and shouty Handspring Puppet Theatre production which visited the International Festival of Arts & Ideas last year. Most keep the script’s structure and find new ways to enliven its three distinct parts (Athens, the woods beyond the city and the amateur-theatrical realm of The Mechanicals). I’ve seen dozens of Midsummer Night’s Dreams in my lifetime, but the only one this Midsummer comes close to in actually deconstructing the text is a two-man, two-woman, one-hour adaptation which Peter Sellars staged in a double bed in a Boston hotel in the late 1970s. Like this one, Sellars’ version was about roleplaying and romantic entanglements. But it was much tidier in its aims. The Summer Cabaret’s Midsummer has a showoffy aspect to it, like we’re supposed to be charmed with how they’ve inserted so much other Shakespeare into the play, and turned it on its head by having The Mechanicals play The Lovers and eschew Pyramus and Thisbe altogether.

One could easily argue that Shakespeare had a point in mocking an Ovid myth and in presenting it, purposefully badly, in front of some vain and isolated royal godly lover characters. But, as with the two funerals in Tom Sawyer, some narratives just seem ripe for streamlining. Holdren, Carpman and company know they’re not playing it safe here. They’re not making obvious improvements, or even making sense, as much as they’re making chemistry experiments, testing the flexibility of the text. They’ve found juxtapositions and connections that simply wouldn’t exist if certain elements weren’t shunted right up next to each other, on such a quiet dark landscape.

There’s a randomness to Midsummer, and those recognizable quotes from other can awkwardly snap you out of the immediate theatrical reality and into some Elizabethan trivia quiz. But there’s also a sense of adventure that’s essential to any good production of the play. These players deliberately lose themselves in the woods, keep their wits around them, create shelter and safety and society, and survive the ordeal with good humor and much learned. 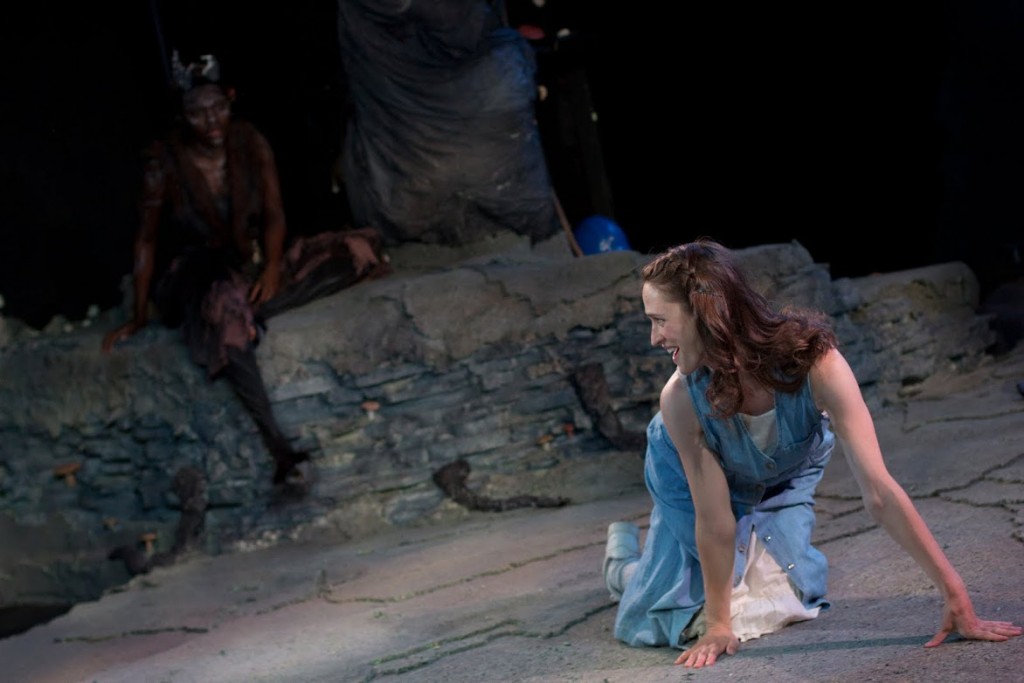