Be always drunken. Nothing else matters: that is the only question. If you would not feel the horrible burden of Time weighing on your shoulders and crushing you to the earth, be drunken continually.

Drunken with what? With wine, with poetry, or with virtue, as you will. But be drunken.

Gosh, Eugene O’Neill’s characters hang out in bars so believably. How on earth did the playwright capture that culture?

Thornton Wilder finely delineates an alcoholic choir director in Our Town; where did he do his research?

O’Neill’s bar of choice when he returned to his birthplace of New London was The Oak. The bar is still around, looking much as it did a century ago, and is known as The Dutch Tavern. Its artistic roots are still profound, though they’ve switched from the theater realm to the local music scene; the Dutch’s owner for decades now has been Peter Detmold of the legendary punk/pop band The Reducers, and New London arts mover & shaker Rich Martin has bartended there.

Thornton Wilder drank at the Anchor Bar on College St. in New Haven. It’s across the street from the Shubert, so just about any playwright who ever had a play hold its out-of-town try-outs at the Shubert probably drank at the Anchor as well. The reason Wilder had his photo up on the wall there for decades is that he drank there a lot. Yes, his Skin of Our Teeth played the Shubert pre-Broadway, but Wilder also taught at Yale and lived on the Hamden/New Haven border. He was friends with the Anchor’s owners and staff.

When the Anchor Bar was resuscitated in 1946 by one of its previous owners, Al Levett, the transition earned notice in Billboard Magazine:

July 20, New Haven. Al Levett is again the owner of the Anchor Bar and restaurant, former rendezvous for performers playing this city and plans to revive the “green room” atmosphere of the place that was lost during the war years. Levett, now a city alderman, sold the spot shortly before the war and went into industry. He repurchased the place last month, taking possession during the second week in July.

Decor will be marine atmosphere, with addition of autographed photos of celebs. Music will be furnished by a juke box. Anchor will cater to casts from the near-by Shubert Theater and vaude artists from the Arena.

It was Levett who sold the Anchor to the Moore family which has run it since the early 1960s. That “marine decor” mentioned by Billboard is still evident in the Anchor’s “Marine Room” and other areas of the establishment.

Horton Foote had a “temporary home” in Hartford, Connecticut, which is where he was living when he died in 209 at the age of 92. Foote’s son, Horton Foote Jr., owned a bar: Tavern on Jane in Greenwich Village in the min-1990s.

A.R. Gurney, who lives in Litchfield County, apparently drinks in bars (there’s a funny story about him being in a bar across the street from a theater where one of his plays was having its opening night, while in the theater Gurney’s father was telling the Times critic Clive Barnes that the play was no good). But it’s hard to not think of him as more of a cocktails-in-the-living room guy. Like in The Cocktail Hour. Like in Sylvia. Like in The Dining Room.

The students in the Yale School of Drama playwriting program traditionally drank at Kavanaugh’s on Chapel Street—the closest bar to the school and the various Yale theaters. Kavanaugh’s became Sullivan’s. Then Sullivan’s closed in June 2013 and the building has seemingly been under construction ever since. Yale School of Drama students now drink at the Heirloom Restaurant (attached to the Study at Yale Hotel, right across the street from where Kavanaugh’s/Sullivan’s was) and at the new Rudy’s Bar & Grill on Chapel and Howe, just a few blocks away. This, of course, when they are not drinking at their main extracurricular hangout, The Yale Cabaret.

A few Yale playwrights bucked the trend and used to hang at the “old” Rudy’s at Elm & Howe, a block away from where the new Rudy’s is now. (Old Rudy’s became the Elm Bar and now Three Sheets.) From 1994 to 2001, a bunch of local theater types used to meet every Sunday night at the old Rudy’s to read plays, including many new works.

The community-based New Haven Theatre Company was born in a bar‚ BAR on Crown Street, where its founding artistic director Matthew Martin was a bartender and its founding producer Danielle Ginnetti was a manager. NHTC staged plays there several times a year. Eventually the company moved to a different bar, Cafe Guiliano on Chapel Street, where the troupe did improv shows. NHTC is now based in a (slightly) more conventional theater space, the back room of English Market Buildings on Chapel.

Arthur Miller, who lived in Roxbury Ct., has a bar named for him. It’s in London. The Arthur Miller Suite is part of the Stalls Bar at the Harold Pinter Theatre in Leicester Square.

For most of its 50 year existence in the food terminal on Sargent Drive in New Haven, the Long Wharf Theatre has had a restaurant or two, a bar or two, and a hotel as neighbors. For years now those restaurants have been Brazi’s and The Greek Olive, both of which have separate bar areas. Twenty years ago, it was the Howard Johnson’s which saw the late-night action.

Then there’s the Playwright Pub, not named for or frequented by any playwrights in particular, but named in honor of the breed as a whole. There have been several Playwright Pubs around the state. Stamford had one, near the Stamford Center for the Arts. New Haven had one, on the same block as the Shubert. (It’s now The Russian Lady.) Hamden still has one, not really near anything theatrical. The Hamden Playwright is a beautifully run place, by the way—a nice family restaurant with the bar completely separate.

Theatrical drinking is not what it once was, but you still can’t find a theater that doesn’t have a bar or restaurant right nearby. Goodspeed Opera House has the Gelston House next door. The Ivoryton Playhouse sends its patrons to the Copper Beech Inn and the Ivoryton Tavern.

Drink responsibly, drive safely this holiday season. And if you can’t, at least write a decent play about it. 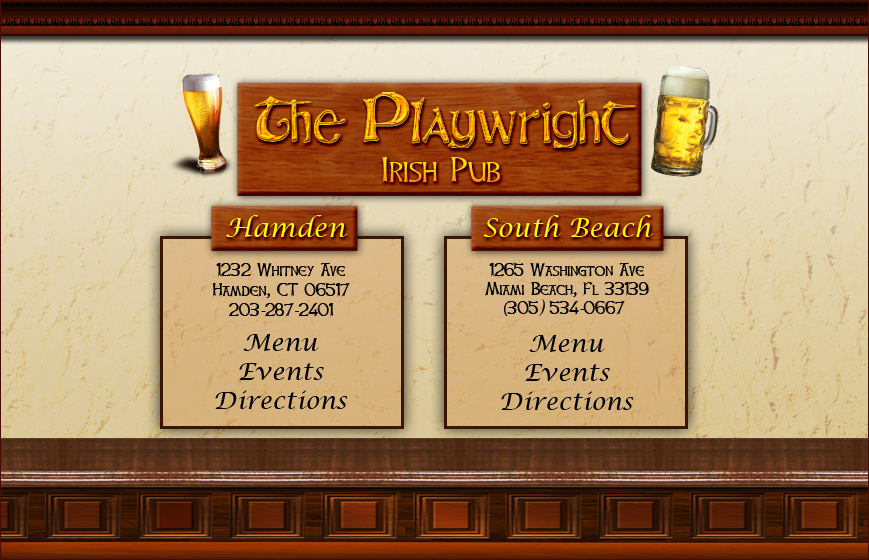