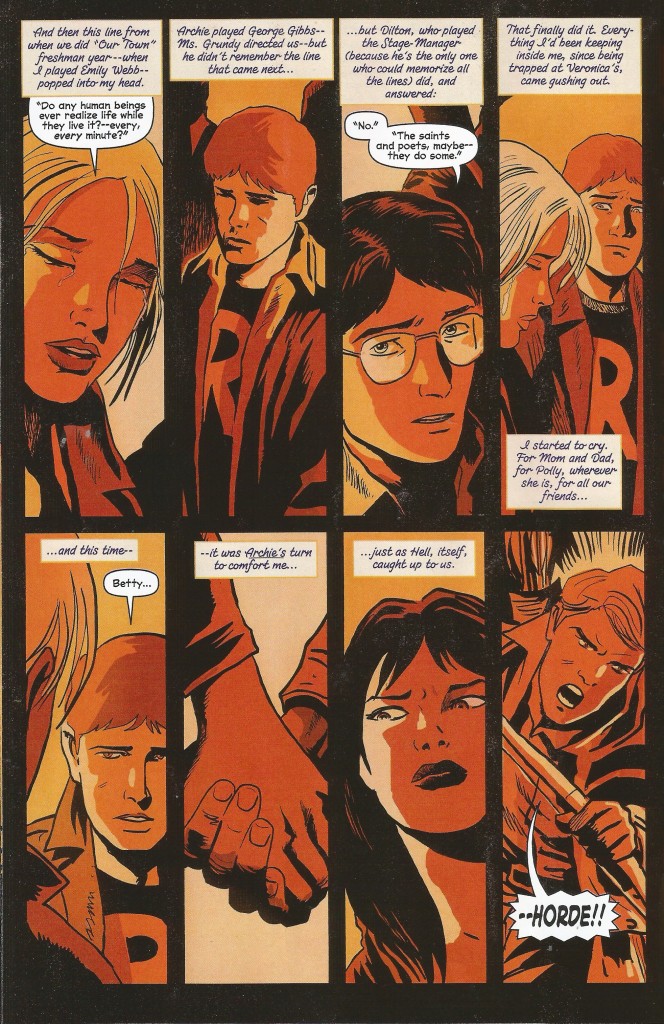 From Afterlife With Archie Comics #7, the second chapter of “Betty: R.I.P.” Written by Roberto Aguirre-Sacasa with artwork by Francesco Francavilla.

Evidence that Gordon Edelstein didn’t go far enough in his cultural update of Our Town earlier this season at the Long Wharf.

For those who don’t see panel-based graphic art as a natural extension of scripted theater and don’t devour comics by the stacksful, I pity you. Many playwrights have gravitated to the comics form. Roberto Aguirre-Sacasa has always had one foot in each world. As a student at the Yale School of Drama, he wrote a play about Archie Andrews living in 1950s Chicago with Leopold and Loeb, enduring the comics censorship which followed the juvenile-delinquent scare fostered by Senate subcommittees. Straight out of grad school, while his playwriting career was gathering steam, Aguirre-Sacasa wrote Fantastic Four and Spider-Man adventures for Marvel Comics. He later was the credited rewriter of the Spider-Man musical Turn Off the Dark.

For those who only know comics from what they read in breathless AP news stories, Afterlife With Archie is NOT the series where Archie Andrews was killed while preventing the assassination of his gay Senator friend Kevin Keller. That’s Life With Archie, and the death story marked the end of that magazine. Afterlife With Archie is a bi-monthly adventure comic rated “Teen+” for “violence and mature content. It began with Jughead’s dog Hot Dog catching a zombie virus, then transmitting to his master, who in turn ate Big Ethel. By this seventh issue, many well-known longtime Riverdale residents are now dead or undead: Jughead, Ethel, Moose and Midge, Pop Tate and lots and lots of parents. (Parents of teenagers in Archie comics can never catch a break.)

Aguirre-Sacasa, unsurprisingly those of us who know both his theater and comics sides (oh, and he also writes for TV’s Glee), finds depth and drama and new modern multicultural and sexual options for these tried-and-true characters whilst respecting the cleancut world from whence they came. He doesn’t mess with the Riverdale realities, just finds ways to present them from a fresh perspective. Dedicated Archie readers, for instance, know that Betty Cooper has an older sister named Polly, who’s graduated college and works as a journalist whom her devoted younger sister seldom sees. Aguirre-Sacasa makes Polly a disturbed, mean, jealous and directionless sibling, who mysteriously leaves the family while Betty is still in junior high school.

Aguirre-Sacasa also doesn’t take for granted that relationships forged in youth last forever, or never change. He accepts that high school is a short slice of life when some people are just beginning to find themselves. That anything-could-happen philosophy aids all the abrupt dramatic twists and turns of Afterlife With Archie.

Theater folk know that Our Town isn’t the tame nostalgic Main Street show that so many community theaters perceive it to be. It’s darker and weirder and goes further into the darkness than audiences have a reason to expect.