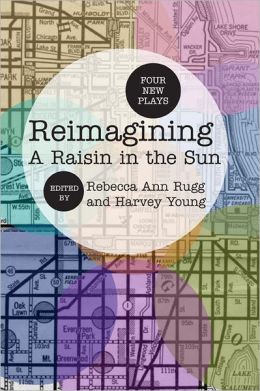 Reimagining A Raisin in the Sun

This book appeared last year, in the midst of the Clybourne Park fever season, when every regional theater company in the known world was doing Bruce Norris’ Pulitzer-winning play. One of its co-editors, Rebecca Ann Rugg, was a student in the Yale School of Drama’s Dramaturgy program over a decade ago. (One of her commendable projects there was assisting on Rebecca Taichman’s legal/literary kitbash The People Vs. The God of Vengeance).

Clybourne Park is a revisionist modern white gentrification answer play to Lorraine Hansberry’s A Raisin in the Sun. This anthology makes the useful point that Norris is far from the first playwright to take on (or be directly inspired by) Hansberry. Featuring supplementary interviews with the playwrights, plus a concluding chat with George C. Wolfe (whose The Colored Museum hilariously messed with Raisin in the Sun a quarter century ago), the book gives Hansberry the credit she deserves for creating a whole new strain of American melodrama, while also acknowledging the originality which Norris, Robert O’Hara (Etiquette of Vigilance), Gloria Bond Clunie (Living Green) and Branden Jacobs-Jenkins (Neighbors) bring to the table.

Still, the book feels only half there. Given the sheer number of productions of Clybourne Park in the past couple of years, a whole field of study has emerged surrounding Norris’ play. Some theaters even commissioned scripts which responded to Clybourne Park’s response to A Raisin in the Sun. Then there’ s the slate of Raisin in the Sun revivals spurred by the success of Norris’ play. (Baltimore Center Stage’s new artistic director Kwami Kwei-Armah wrote his own response to Clybourne Park, Beneatha’s Place, then staged it in repertory with Norris’ play.) There are also several books worth of worthwhile essays and reviews and thought pieces which might result from all those theater productions.

Reimagining Raisin in the Sun is plenty big, just from holding four full-length scripts, five long interviews and assorted introductions and prefaces. Yet it’s easy to imagine much more in this vein. It’d be nice to think that Reimaging A Raisin in the Sun could be the beginning of a new strain of scholarship, not  just an early marker in the ascension of Clybourne Park. Here’s to some other diligent scholars raisin’ the bar.