“Oo-ee,” Ringo Starr. From the 1974 album Goodnight Vienna (the one with the Klaatu from Day the Earth Stood Still on the cover). Just heard this on the Beatles Radio online station, which sent me rushing to Google who played that intense keyboard solo, which led in turn to this list.

Chastity, original motion picture soundtrack. Rebennack co-composed incidental music for the 1969 film with Sonny Bono, who had written and produced the flick as a solo vehicle for his then-wife Cher. Lots of ominous chords and somber-sounding dramatic strings.

“Working in a Coal Mine with Dolly Parton, Alan Toussaint and Irma Thomas.

“Mockingbird,” Carly Simon and James Taylor. (Dr. John’s playing is the only good thing about this otherwise egregious cover, which was unavoidable on AM radio in 1974).

Willy Deville. The late great New York rocker used Dr. John on four of his albums between 1978 and 1995.

Popeye’s Chicken & Biscuits. The “Love that chicken” jingle, which he also sings.

The very special theme song from Blossom, which he also sings.

The theme to the PBS series Curious George.

The Princess and the Frog, “Down in New Orleans,” written by Randy Newman.

“Let ‘Em In,” the Wings song, from the new Art of Paul McCartney tribute.

Dr. John Plays Mac Rebennack, for his version of Hoagy Carmichael’s “The Nearness of You.”
In a Sentimental Mood, for his version of “Makin’ Whoopee!” with Ricke Lee Jones.
In the Right Place, for the title song and “Such a Night.”
Ske-Dat-De-Dat…The Spirit of Satch, for the strange cover of Brecht & Weill’s “Mack the Knife” and the frisky take on “Dippermouth Blues.”
Storm Warning: The Early Session of Mac “Dr. John” Rebennack, from when he was primarily a session guitarist.

We’ve all witnessed what we’re sure must be the longest drum solo in the world,. But what about the bass?
“Bassy” (pronounced “Basie”) Biggs, who is equally proificient on the stand-up acoustic, electric and stick varieties of the instrument, held forth for hours Saturday at a downtown cathedral. Occasionally a guest star would stride up and plug in a guitar, but mostly it was just basic Bassy. He allowed himself one five-minute break per hour, which he covered with tape loops of himself so that the music never actually stopped.
He went on like this for close to seven hours, which he deemed “no big deal. I’;ve definitely had rehearsal days that went longer than this.”
The audience for Bassy’s endurance exposition was sparse for most of it, but toward the end a group of well-wishers from the Bullfinch piled into the pews to chant “Bass-y! Bass-y! Bass-y!” He didn’t break, and went another hour with a flourish. Back to bass. We’ll write more when the record’s been confirmed.

Tonight: Another preternaturally poppy evening at the Bullfinch, with Kolor Syndicate and Jackansons… Luminate and Mane Focus (a hair band if we ever heard of one) at Hamilton’s… D’ollaire’s is dark again. What’s going on?

Of the 23 stories collected in the culinary-themed Archie Comics Spectacular edition Food Fight!, only five feature Riverdale High School cafeteria chef Miss Beazly. That’s a very low percentage. Just as remarkably, none of those five stories paints Miss Beazly as a hopeless bad cook. In fact, in “Dishing It Out,” she wins a Food Preparation contest at a Cafeteria Managers Workshop, and in another her lack of popularity among the student body is blamed not on any lack of skill but on “bad menu choices” such as Catfish Pizza, Mystery Loaf and Liver Burger.
The most common foods in Food Fight! are cookies and cakes—baked to perfection by Betty and Ethel, ruined by Veronica.

We are celebrating our newfound responsibility.

Male Gaze, “The Shining Path.” Frantic, intense yet oddly controlled musing on society and greater meanings. Wild and busy, then switches to such clean chord changes that it almost comes off as a Rutlesque joke.

Don’t. Even. Think. About. It.
Wait. You’re thinking about it, aren’t you?
Don’t.
Please.
OK, stop.
I know you’re thinking .
It’s because I divided that sentence into single words with periods after each one, isn’t it?
Isn’t. That. Right?
OK, let’s try it again now. Don’t even…

The Shore Lobsters are that trio which formed to play postgame shindigs at flying disk tournaments in which the band’s members hurled and spun, added a slew of members for a special gig last month.
The line-up included two more guitarists, a keyboardist, two harmonica players, a ukulele player, two tambourine virtuosi and assorted roadies.
As of Tuesday, the band reverted to a threesome. “Musical differences” are being cited for the split.
It was a ruse, actually. The flying disk team had been invited to an international tourney, but couldn’t afford to go. So they strung together a variety of small grants and bequests so they could make their match.
The band was formed under an arts enrichment grant bestowed by the college on the hill’s ethnomusicology department. The institution was fully aware of the impromptu, second-priority nature of the ensemble they were funding, they simply set conditions. The disk tossers all had to attend a special class on music appreciation and three supervised rehearsals. They had to learn a composition by a student composer and perform it at the tournament to an audience of at least 20 people. And they had to submit a group report on their musical voyage. Especially sweet: the college even provided the group’s musical instruments.
All conditions were met, especially the concert one. When the organizers of the Wam Hau Tournament, on a small Caribbean island, caught wind of the intriguing travel fund, they invited the ShoreLobs to perform at the opening ceremonies, before a crowd of thousands. It’s thought to be one of the largest crowds ever to see a live performance of a neo-classical student composition in the history of the college. (When I ran that stat by one of the students, Jean Bluté, he replied “It’s not like they ever invite us to play at the football games.”)
The scheme is unlikely to be epeated, but the band’s performance of “Disk Variations” has been recorded for posterity. While none of the new members wanted to officially join the musical wing of the team—only in the rarefied sport of disk-tossing could membership in a jam-rock band be considered “too much work”—it’ll be hard to stop them jumping up at post-game jams now that they know a few pan-flute licks.
Tonight: Pizzings and Tumblefun (not as fun as they sound) at the Bullfinch… The Cranberry Building and The Fieldstons at Hamilton’s, playing the tunes you know so well… D’ollaire’s is dark. The date was being held for some former superstar, who still apparently likes to screw over clubs at the last minute… 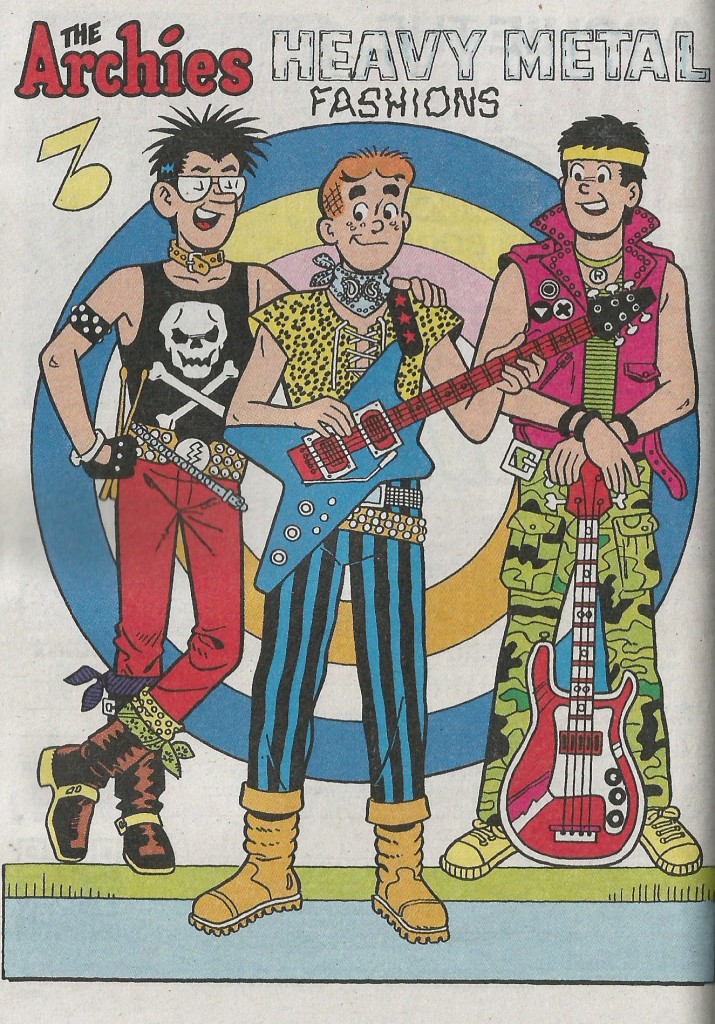 A fashion page reprinted in the just-released Archie’s Funhouse Comics Double Digest #12. There have been an Archie punk fashion page and an Archie grunge fashion page, so a Heavy Metal one is not so bizarre. But what made them reduce “The Archies” to a male trio? Afraid that Betty & Veronica would look too much like Tawny Kitaen or Lita Ford? There are limits, apparently.