The Archie universe is unrecognizable from where it was just a couple of years ago. The regular monthly comics have been winnowed down to a few staples (Archie, Jughead, Betty & Veronica just joined by Josie & the Pussycats with Reggie upcoming), all of which have been rethought in long-form formats where there’s one single adventure going on with a “…to be continued” tag at the end.

The short stories still exist in the Archie digests, which are still plentiful. Some new material lands there, and on Archie’s digital platform. But the longserving artist/writer Fernando Ruiz has announced he’s leaving the company, and the overall tone of the digests has become more classic, more historical, befitting the 75th anniversary celebration of its red-headed hero.

Then there’s television, which is often the ultimate gamechanger. How long did the Adam West series cast a shadow over Batman, or George Reeves over Superman? “Riverdale,” now set to debut in January, is an hour-long ensemble show with drama and mystery elements.

I have remained a steadfast fan, but in comic terms, it’s like living in a different universe.

The new Archie? So much to say. Not a botch. A workable new beginning. But I’m obsessed with shelf life. How long can any such reinvention last? We kind of know, thanks to the Archie “new look” series of a few years back, or the Life With Archie multiverse. A couple of years, probably, before the mix of drama and comedy gets consumed by the drama and continuity and loses the interest of anyone but the loyalest fans.

It’s not that I disapprove of bringing a classic character into the here-and-now. It’s just that I openly question something that works so well in short, colorful bursts and imposing such grand structure on it. Archie comics endured throughout the second half of the 20th generation in large part due to the comic ingenuity and rapidfire pacing of writers such as George Gladir and Frank Doyle and artists such as Stan Goldberg, Dan DeCarlo and Harry Lucey. This new Archie isn’t taking cues from them. It ought to, for longevity’s sake. 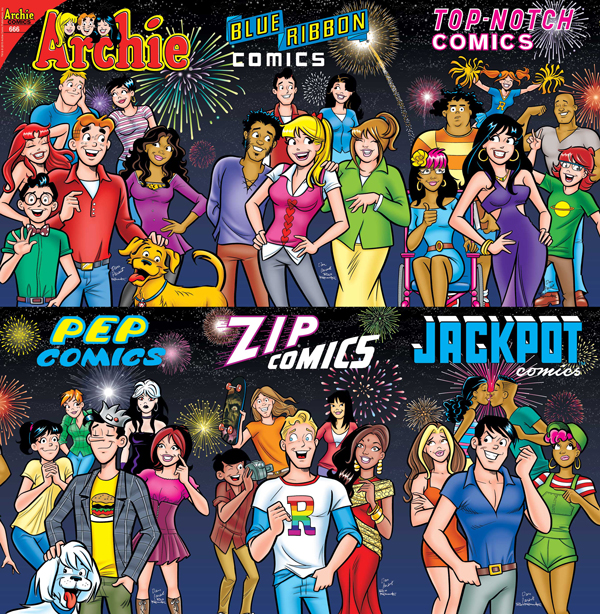 As mural-forming puzzles go, the six collectible issues of Archie #666 leave a bit to be desired. They only vaguely match up thematically, and not at all in terms of of angles or perspectives or being able to see the characters’ feet. Also, given that this is the last issue of a certain phase of the Archie flagship title, why are the covers a celebration of the extended Archie ensemble and not of just Archie? After all, Betty and Veronica and Jughead and Reggie and Kevin have all had their separate starring titles, none of which is currently in print (though the joint Betty & Veronica title is still going strong, and the end of the Jughead hiatus is nigh). And some of those minor characters depicted here never actually made it into the Archie title.

On the other hand… Hey! Fireworks!

To an Antique Freak, It’s an Obsolete Treat

I was napppin’ and rappin’ and dancin’ in my sleep

When I heard a squeaky sound

…the opening of a door!

It could have been a monster!

It could have been a ghoul!

It was just my mom yellin’

“Archie! Get to school!”

(The book contains only stories about The Archies)

Lee Lee and the All Night Dogs

Melvis (“I’m just a heap, a heap of steamin’ affection”)

So there’s gonna be a new Jughead comic. Finally! It’s been three years since “Archie’s pal”’s solo book petered out in a haze of exaggerated psychodramas and flat-out fantasy stories. The new adventures will be written by Chip Zdarsky and drawn by Erica Henderson and are due in the fall.

Jughead’s a sensitive, complicated character. A loner but not so much of one that he can’t be the best friend of America’s typical teenager. An outsider who is embraced or tolerated by all the most popular kids at Riverdale High. An individualist outsider who nonetheless delights in public pranks and all-you-can-eat competitions. A girl-hater who’s had a remarkable number of young romances. A skilled yet reluctant athlete. It’s a tricky balancing act, but some skilled writer has to step up. It’s been too long without a new Jughead book. 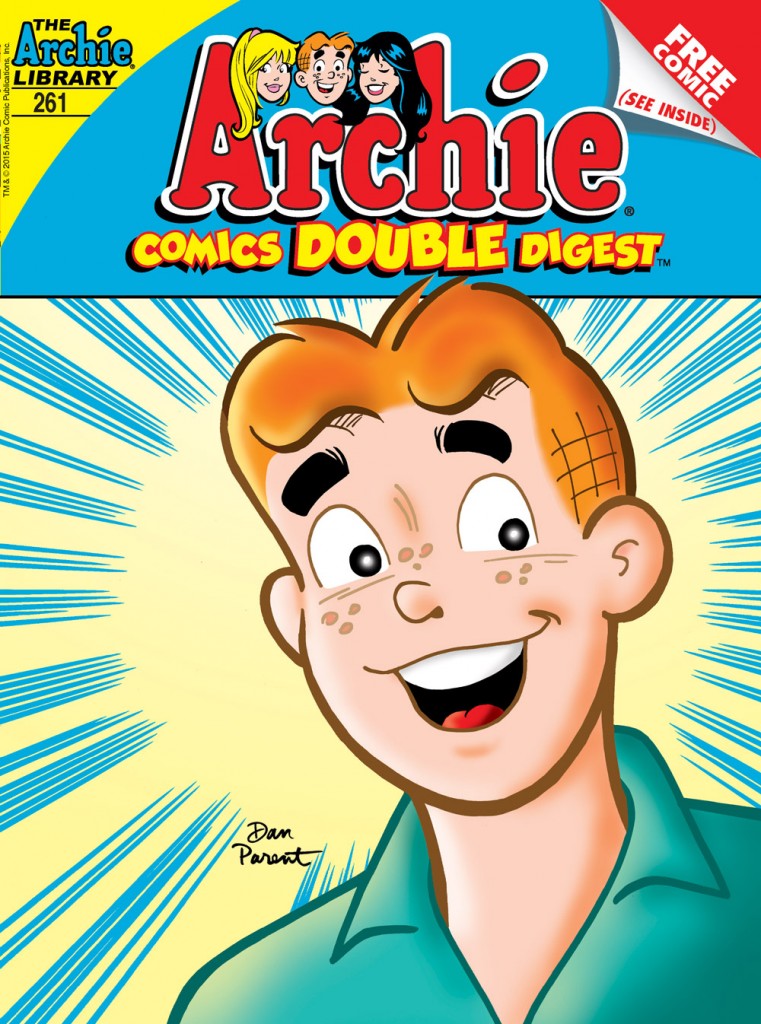 The 20 variant covers for the upcoming Archie #1 are on view (and available for preorder, at $3.99 each) here.
http://archiecomics.stores.yahoo.net/archie1.html.
My personal favorite is this one, by T. Rex and Andre Szymanowicz.

As for the reimagining itself, I shrug and hope for the best. But 10-year-old Sally was apoplectic when she saw the non-variant cover drawn by Fiona Staples, who with writer Mark Waid is in charge of the reinvention. “Archie has a fauxhawk! He has a fauxhawk!”
Archie #667 will be released July 8. But first we have Archie #666 to look forward to. My subscription copy has not yet arrived, but it was released this week. Oh, and there’s a collector’s variant bundle of that, too, that I’ve just ordered online—six issues that connect to form a single large image of dozens of Archie characters enjoying fireworks. There’s a different title on each one, acknowledging the earliest Archie titles from the 1940s: Pep, Top Notch, etc. (Pep actually lasted into the late ‘80s as an Archie comic. I miss Pep.)

In its second issue, Archie vs. Predator gets even sillier and sicker. It makes Betty the villain of the piece, for having invoked a curse on Veronica based on the best friends’ lifelong rivalry over Archie. Having shed Betty’s innate goodness for an unnecessary subplot, the comic then proceeds to slay some major players in the Archie universe. I feel like I did when watching badly scripted horror films of the ‘80s, when the arbitrary deaths were much scarier because they wreaked havoc with logic, pacing and common sense. Insanity sets in.