Yesterday was such a grown-up day, today I slept in until 4 p.m.

We’ve only just started closing the windows at night, but that’s turned our thoughts to the chillier months ahead and the appropriate soundtrack for them. There’re plenty of similar lists out there, so I’ve tried to make mine appreciably different.

The Merlos broke up last month. Their biggest fan, Bill T., has been turning up at their (and every band’s) main haunt The Bullfinch every night since.

You know a guy in the scene is in a bad state when he comes to the Bullfinch to drink and not see a band.

No secret that Bill T. and the Merlos had developed more than the usual band/fan connection. Bill has used the Merlos to score screenplays he’d written, kept talking about a documentary he was going to do on the band. Now the ending of such a film has been written before he could film the middle.

The break-up seems irreparable. That’s because it involves both money and a girlfriend. The biggest disaster, as Bill T. keeps reminding us in his stupors, is that not one single Merlo has any intention of starting another band.

Tonight: Neil’s Donuts at the Bullfinch, several tasty sets… Hot! Fresh! Good!, the cultured jam band, at Hamilton’s… D’ollaire’s is closed due to no nostalgia in the air.

I’m telling everybody. Due to a (non-viral, non-disastrous but potentially pesky) technological upset, my theater-centric blog New Haven Theater Jerk has been moved to a safe new location on this scribblers.us domain. The new address is:

You know, like “tj” for “Theater Jerk.” Please join me there. 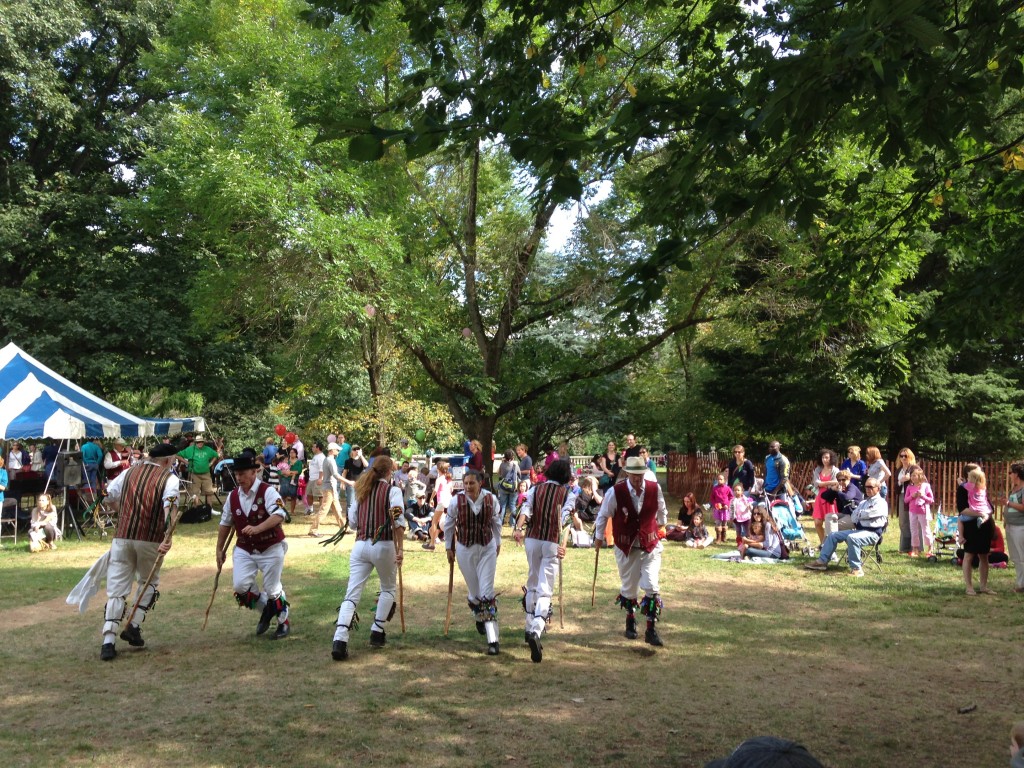 Scored a couple of dozen vintage Archie Comics Digests for a nickel apiece at the Sunday in the Park gathering in Edgerton Park last, uh, Sunday.

Amazingly, also ran into a guy named George  whom I hadn’t seen in many years. Sunday in the Park with George. It was that kind of day.

Didn’t go there for the cheap comics, or the cheap Sondheim gag. The family goes every year. It’s an honest-to-goodness family-friendly neighborhood fair. It plays out in real time, with an tranquil air. There’s no manic shouting. There are hardly even any microphones. We’re talking an old-school jazz band playing Sinatra standards. We’re talking Morris dancing. Sunday in the park has rides which fit the environment– cables strung between trees, a climbing wall in a grove. It has old fashioned kids games like bean bag toss.

Sunday in the Park is based on British park fairs, conveniently overlooking how different English culture, customs, and especially the weather, can be from New Haven’s. The organizers simply will a mannered, breezy, grassy day of fun into existence. The effort has never failed, and though the event has grown greatly over the years, it retains its essential quaint charms.

And as soon as it was over, it seems, it was Autumn. That gorgeous chill is upon us. The leaves are poised to turn. The Farmer’s Almanac is on the racks in supermarkets. The solstice is this weekend.

May all your Sundays in parks be so wondrous.

Band on a board: Jilly Thing of high school hardcore heroes Throwup Thrust couldn’t get a ride to the gig at All Age Basement last Thursday night, so he loaded all his gear– bass, amp, cords, etc.– in bags and arms and went manically skateboarding down the main street for about. If he hadn’t been running so late, he reasoned, he might have considered walking. On the other hand, he feels more surefooted on wheels.

But here’s the cruel injustice: while JT was playing, someone swiped his board. (It’s black with blue flames, in case you happen to see it wrapped around a tree somewhere).

The kid got a ride home, but remains despondent. The GoofyFoot and NoseSlide show this coming Thursday at the Bullfinch has turned into a skateboard benefit event. Give generously. We all want to see Jilly Thing try that crazy stunt again.

Tonight: Lit rock with Shut Up He Explained and How to Write a Short Story at the Bullfinch… invitation-only buffet-dinner benefit at Hamilton’s with the reunion of an old regional band, The Wedding Knots. We suspect it’s more than a nostalgia shindig. We suspect it’s a wedding… Black Garlic at D’ollaire. If they go one more year without another hit, next time they’ll be billed as “An Evening With Black Garlic”…