This was the set list for the He Who Gets Slapped show Thursday at the Bullfinch: 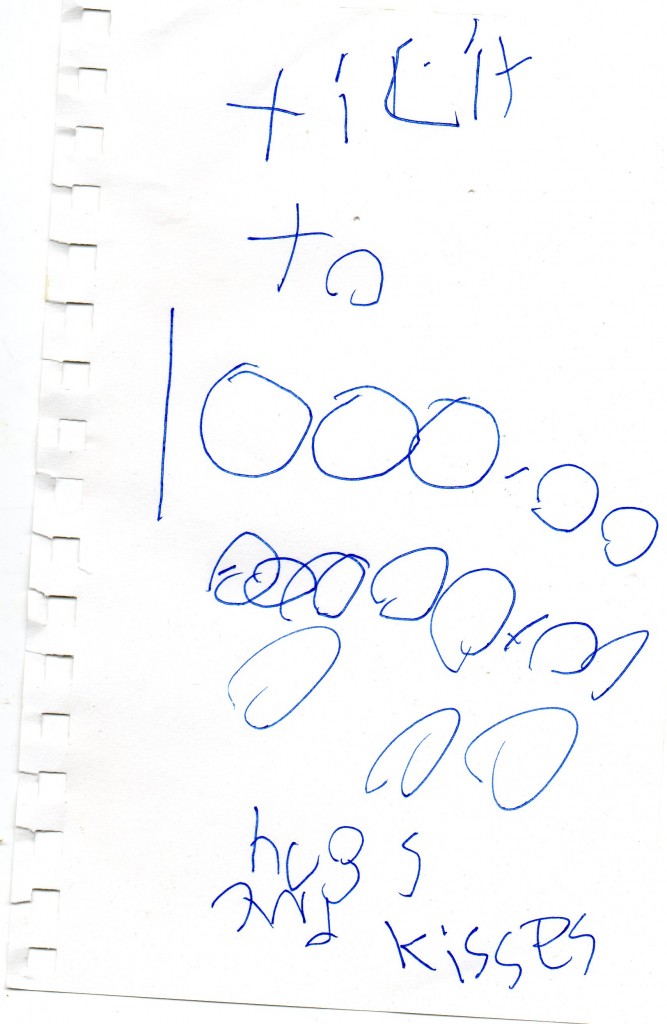 How d’you think it turned out? Magic. Sheer magic. Assuming that Sheer Magic is a brand of rum.

The Rakitins and Lulu Cough at the Bullfinch… Rasta Covsky, Russian Reggae, at D’ollaire’s, with Corporal’s Widow… Hamilton’s has a private party we’ll tell you about once the smoke clears…

The theater gang next door wants to shanghai our station.

Gem Club, Breakers. Released Sept. 27 on Hardly Art Records
At first look, I thought Gem Club resembled Connecticut’s own The Procedure Club—withdrawn female vocalist and scruffy male instrumentalist. But Gem Club doesn’t race around like Procedure Club or other duos. Their sound is mystical and moody and takes its time in excitedly risky ways. Whispers are echoed, tinkling bells carry the melody away from the strings and piano. Besides, this is a trio: leader/pianist Christopher Barnes, cellist Kristen Drymala and singer Ieva Berberian.
The music could score a tragic Swedish drama, a cold walk on the beach. But contemplative moments shine through.

Here’s how the reliably lurid Signet paperback people were marketing Nadine Gordimer in 1956: 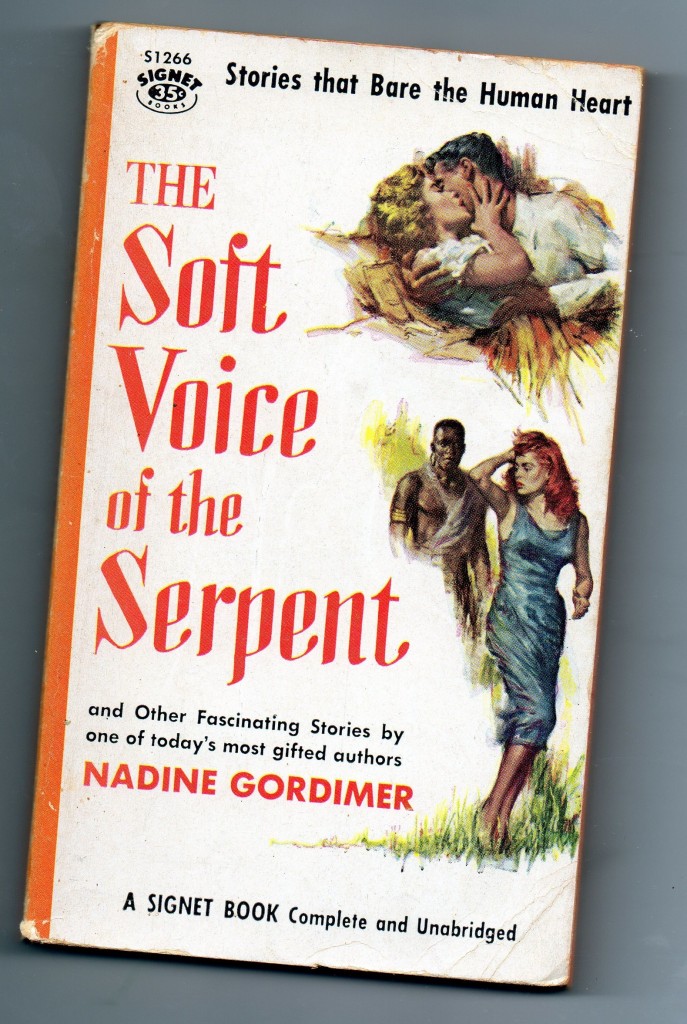 Quite a change from 20 years later: 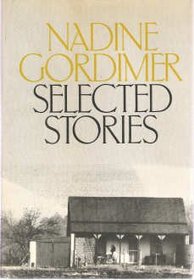 After the third time I’d directed someone on Dwight Street to 48 Howe Street (“You’re on the wrong street!”), I finally got it. Fellowship Place, our friendly neighbor from down the block, has moved its so-called “Clubhouse program” to a new location while its longterm headquarters on Elm Street between Dwight Street and University Place is undergoing six months worth of renovations.

Fellowship, which calls itself “a supportive community fostering mental health,” runs several residential houses for its clients, but for many of them a central gathering place can be as crucial as living quarters. Fellowship’s “Social Programming” shifted to 48 Howe on Sept. 15.

Fellowship Place is celebrating “50 Years of Caring” this year. It’s easy to get run down and need a change of scenery when you turn 50. 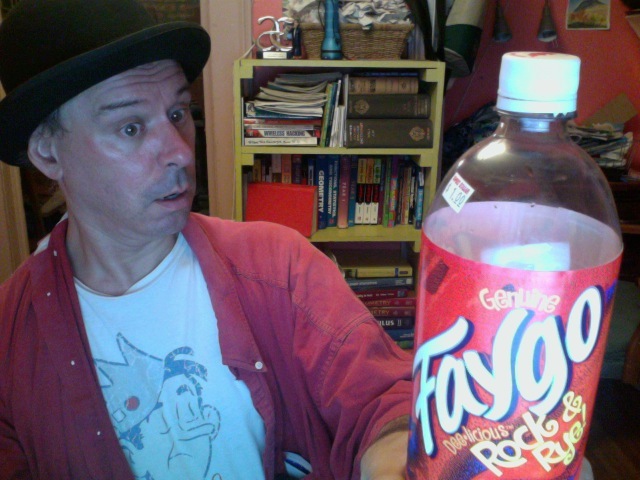 Kathleen and Mabel went shopping at the Family Dollar store, and when they returned they said they had a surprise for me.
More like a miracle. The miracle of nectar being stolen from the gods on Mount Olympus. Or, in this case, Detroit Michigan.
They were brandishing a one-liter bottle of Faygo Rock & Rye soda pop, an elixir which I know from my own extensive safaris into supermarkets to be available only in the Midwest.
Having been born in Iowa City and spent 20 summers in Michigan, I’m a soda pop snob. I’ve had the best, and the best of the best are:
1. Vernor’s.
2. Faygo Rock & Rye.
(After that, Connecticut can have a turn. Insert your favorite Foxon Park soda into slot number three.)
Just as Vernor’s is too good, too distinctive, to be referred to merely as “ginger ale”—it’s like real Champagne versus “sparkling wine”—Rock & Rye rises above all other products which bear the label “cream soda.” The fact that they’re not easily gotten in most of the United States only makes them tastier.
I’m glad Kathleen and Mabel found the Faygo at the dollar store first, because if I’d seen Rock & Rye on a New England supermarket shelf myself I would have fainted.
So what does this all mean? Will Rock & Rye now be regularly available in my home state, meaning I don’t have to pay shipping fees for special delivery from online soda pop purveyors? (Went to Stop & Shop today just to check if they have Rock & Rye too. They don’t.) Or was this some extraordinary carbonated fluke?
In either case, my world has been rocked. And ryed.

By Artie Capshaw
For my money (not that we pay any—we’re on the list, don’tcha know), the best local opening act in town is Q (full name unknown), the barback and default roadie at the Bullfinch. No one runs a load-in like this guy. Time is money for him, and bands don’t tip the way the way other patrons might if he gets to spell one a bartender for a short spell. This guy may be at the bottom of the watering hole food chain, and spends most of his time moving stuff around in the cellar. So it’s a thrill when he comes out of his lair, hoisting each amp or gearbox in his inimitable style—up on his shoulder, clamped against his noggin like it’s a gigantic transistor radio. All hail Q—who’ll probably beat me up when he reads this, unless I specify right here and now that the praise is sincere. …
Candid Microphone Nite at the Bullfinch. Yeah, that’ll last… All-girl covers band The Housewives’ Protective League at Hamilton’s, sharing the bill with the members’ actual hubbies, posing this night as The Favorite Husbands but better known as Fitch Band… My True Story at D’ollaire’s, a rare tour, and reportedly a short. Luckily there are two opening acts: Scramby Amby and Rocky Fortune… 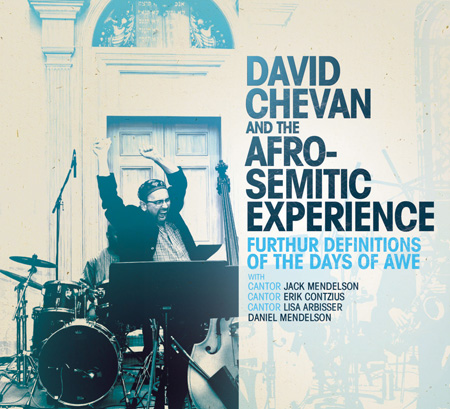 The Afro-Semitic Experience, Further Definitions of the Days of Awe

When I noticed this new album was called Further Definitions of the Days of Awe, I had to go listen again to The Days of Awe: Meditations for Selichot, Rosh Hashanah and Yom Kippu. That 2003 CD was billed as a solo project of Afro-Semitic Experience co-founder David Chevan’s 2003 but features the Afro-Semitic ensemble as well as Frank London. The yesterDays of Awe made me backtrack further to Afro-Semitic’s 2005 Plea for Peace and finally all the way home to Chevan and Warren Byrd’s This Is the Afro-Semitic Experience, the first album to use that name.
I could have dug out Chevan’s old Bassology recordings, where the roots for his musical cross-pollinations began. But I’d already done that last month, going on a Bassology binge without suspecting that a new Chevan disk was coming in the mail.
Not that everyone would (or should) do such dutiful scholarship.

Further Definitions of the Days of Awe is a live album, but the only difference between it and the studio records is that you can hear an audience cheering and applauding. Afro-Semitic albums always sound live. When cantors are enlisted as vocalists, they sound genuine and openly emotional, not studied or pristine. The band improvises readily and can really create a wall of sound if they wish, but also know when to politely sit aside and let Warren Byrd do a sweet, subdued, piano solo.

Afro-Semitic Experience has existed under that name for a decade now, and boasts the same five core members: Chevan on bass, Byrd on piano, Will Bartlett on various clarinets and saxophones and percussionists Alvin Carter Jr. (behind a drum kit) and Baba David Coleman (on congo drums). Trumpeter Frank London’s back for the New Haven one of the three concerts from which this recording was culled. (The others were in New York City and Greenfield, Mass., and all took place just before Rosh Hashanah last year.) One notable absence on this album is guitarist/violinist Stacy Philips, but you can’t have everything.

Actually, Afro-Semitic Experience suggests that maybe you can have everything. They enlighten, uplift and entertain. They respect traditions even while placing them in odd juxtapositions, and they improvise wildly. They bring in guest players from rabbinical chanters to electronicists, yet retain their key characteristics.

The effort it must take for the musicians to maintain such balance, grace and reverence while following their experimental instincts seems extraordinary. Miraculous, you could say. An interfaith blend of African rhythms, be-bop jazz and any Jewish music which can be applied, from klezmer to classical and, of course, cantorial. On the two-part “Ashrei,” beats get sprightly behind fervent wails. Then the horns kick in. “Viddui” opens with a sultry soul melody, almost a midnight groove. But instead of Marvin Gaye’s back-up singers, there’s a bunch of guys chanting in loose harmony, in Hebrew.
Describing the Afro-Semitic Experience always sounds funny to some people, like it’s some sort of forced conceptual joke. Which is why you must, to borrow a word from the band’s name, experience it. This CD, which shares one of the band’s own favorite rituals—backing Cantor Jack Mendelson at the midnight Selichot service at a synagogue in White Plains, New York—is an awesome place to start.

My friend and former New Haven Advocate colleague Colleen Van Tassell was in town last weekend, and I missed her. Had several chances to sup, and couldn’t make any of them. She lives in Pittsburgh, a city I have not been to in nearly a decade. This lack of contact has weighed heavily on my mind.
So I trawled through the basement and found a poem clipped from an old Vanity Fair magazine collection—the original Vanity Fair, of course, and since this concerns Colleen, the piece is by Dorothy Parker, of courser.
It’s titled Men: A Hate Song, and it begins:
I hate men.
They irritate me.

You can find the whole poem—and even an mp3 recitation of it—here. There’s a companion poem, “I Hate Women,” but it’s the Men one that Colleen and I used to coo about. It was pinned to my Advocate bulletin board for years.
Got to get out more. Got to plan a trip to Pittsburgh.