Posted by Christopher Arnott on August 9, 2011 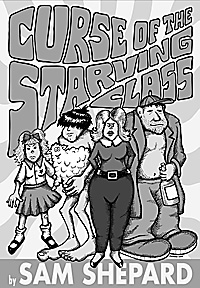 Everybody has decided that everybody is panicking. So everybody is screaming and getting up and running out of the theater.
—BU Economics prof Laurence J. Kotlikoff, quoted in the Aug. 9 Boston Globe story “An Avalanche of Worry—World Markets Plunge on Fears Over US, European Economies

A dizzying array of disaster metaphors in today’s news. Avalanche, plunge, teetering on the brink… the only ones left to use in tomorrow’s papers will be locusts and paper cuts. But that theater panic riff really stuck out for us. What shows should those jittery crowds be seeing with their fast-dwindling disposable income?

The American Clock by Arthur Miller. A chronicle of the 1929 Wall Street crash and its aftermath, by a playwright who lived through it and whose writing career began with a New Deal WPA gig. It only lasted 12 performances on Broadway, but college and community theaters have kept the fires burning. Boasting one of the largest casts of any Miller play, it was made into a TV movie in 1993, adapted by Frank Galati and directed by none other than Bob Clark, of Porky’s and A Christmas Story fame. The TV cast is astounding—everyone from Mary McDonnell to Joanna Miles, Kelly Preston to Estelle Parsons, Jim Dale to Eddie Bracken, Yaphet Kotto to Tony Roberts. David Straithairn and Darren McGavin play the same character at different ages!

Grapes of Wrath by Frank Galati again. The great adaptor explored the upper classes losing their cash in his American Clock screenplay. His take on Steinbeck’s book covers the lost dreams of those who never had money in the first place.

Flora, The Red Menace by George Abbott, Robert Russell, John Kander and Fred Ebb. A 1965 musical presented as if it were produced by the Federal Theatre Project.

Annie, Rainmaker, half a dozen other Odets, more variations on Grapes of Wrath… We could keep going on Great Depression shows forever. Let’s move on to other eras:

The Admirable Crichton by J.M. Barrie. An epic of financial reversal, in which a servant is better equipped for survival and powermongering when money is removed from the social equation. Not just economically but environmentally aware, the play chickens out in its final act before it can make a strong statement about societal class shake-ups.

Other People’s Money by Jerry Sterner. The seriocomic consequences of corporate takeovers.

The Merchant of Venice by William Shakespeare. Arrogance, racism and cultural one-upmanship all based on whether or not one’s ship comes in.

An Enemy of the People by Henrik Ibsen. A defense of whistleblowers and rational planners in communities blinded by the promise of easy short-term riches at the expense of long-term health.

Le Bourgeois Gentilhomme by Moliere. Nipping social-climibing in the bud, not because of national financial concerns and austerity trends, but due to commonsense exasperation at unchecked vanity and ludicrous luxuries. Rewritten for the 1980s by the great Charles Ludlam and ridiculously retitled Le Bourgeois Avant-Garde.

Curse of the Starving Class by Sam Shepard. A play so full of stuff that it has resonated with every political or cultural upheaval in America since it was written in 1978. Corresponds neatly with today’s turmoil by referencing zombies.