Posted by Christopher Arnott on October 15, 2011 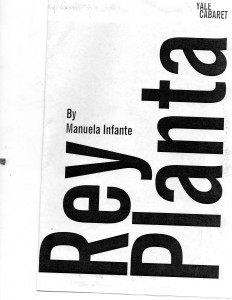 Just a decade ago in Nepal, a crown prince (presumably miffed at his mother’ s opinion of his fiancee) slew both his parents and most of the rest of the royal family, then finished the job by shooting himself. The suicide was handled more sloppily than the murders, placing the terrorist prince in a three-day coma before he died—during which time he was duly sworn in as king of Nepal.
This incredible real- life tragedy, and its attendant unbelievable example of how far a country will go to uphold a monarchy, seems organic grist for a frenzied political theater piece along the lines of Dario Fo’s Accidental Death of an Anarchist. Yet Rey Planta is more like one of the measured, text-driven monologues of Fo’s wife Franca Rame.
Manuela Infante’s perversely reserved, calmy provocative play is receiving an overdue US premiere at the Yale Cabaret in a brand new translation by Yale school of Drama dramaturgy student Alexandra Ripp. The staging by Michael Place is so decidedly anti-sensational that it risks being static and sterile. The glory of the translation, direction, performances and design are that they keep your eyes attracted to a show where the leading performer seldom does more than quiver.

The piece is played out as if the King-in-a-coma was on exhibition in an art gallery. A security guard sits in a corner reading the newspaper and occasionally wanders through the gallery, and a cleaning woman also makes an appearance, but that’s the entirety of the action. — is front and center onstage, but he doesn’t go out of body and start animatedly narrating the circumstances of his demise, or flashing back to livelier times, la Sunset Boulevard. He doesn’t talk. He stares deadly ahead, sometimes pitches forward, drools a little. As carefully modulated by Robert Grant, none of this coma composure is overdone or in poor taste; it fits the calm and elegant art gallery backdrop.
While his body rests, the King’s mind is active, alert and extremely loquacious. His articulate, philosophical, uncommonly self-reflective and contemplative expressions are voiced through an offstage microphone by the unseen Monique Bernadatte. Last week, Bernadette was the largely mute yet physically vital presence in Alexandru Mihail’s Cabaret adaptation of Ingmar Bergman’s Persona. She’s really got this voice/body disconnect thing down. Her interpretation of “The King’s Thought” is smooth, even-tempered, unflappable yet still passionate and resonant and rhythmic and musical, like something out of a Robert Ashley opera.

Manuela Infante is skillful at articulating the social changes of Nepal and the personal turmoil of its out-of-touch rulers. The real-life story of the country had a happy aftermath—the machinations of the man who eventually took power (the uncle of the young coma-king portrayed in Rey Planta) led to a people’s uprising which dethroned the monarch and gave way to a new democratic system of government. This play, first presented in 2006, doesn’t go there. It’s more of a reflection on how bad things had become. The fact that they’re better now seems inevitable.

While you know where the playwright’s sympathies lie, this is not a polemic. It’s a portrait of a vulnerable human whose family oversaw a vulnerable country.
Yet while keeping the tone reserved and formal, Rey Planta is nonetheless able to make royalty seem ridiculous. The Cabaret production captures all the subtleties of Infante’s carefully wrought monologue. Robert Grant looks both laughable and pitiable in his tall red scraggly crown. He is a portrait out of place with the others on the wall, yet his is by far the most fascinating.

I’m really sorry that the Yale Cabaret didn’t have photos of this immaculate, beautifully composed production that I could share with you. Given the tight, shallow confines of the stage (necessary to validate the art-gallery conceit), the clarity of Glenn Isaacs projection design and the (uncredited) lighting design adds depth, light, grandeur and layers of additional meaning to this spare, single-voiced script. The show can be slowgoing to be sure, but they couldn’t have dressed this up any finer if they were doing it in a Nepalese castle. The challenges of this unusually structured and visualized piece are clear, and just as clearly the Cabaret is up to that challenge.
In this week of international protests and open questioning of ruling capitalist powers, Rey Planta shows us that there’s more to revolution than shooting and shouting.

10 Responses to The Rey Planta Review