Posted by Christopher Arnott on October 3, 2011

Always worthwhile when a scrappy political theater visits the Yale campus. On Wednesday afternoon, Oct. 5, the Yale School of Drama welcomes The Freedom Theatre from Palestine. The five-year-old company runs a youth theater and cultural center at the Jenin Refugee Camp in the north part of the West Bank, grew out of a project, “Care and Learning,” begun by activist Arna Mer-Khamis during the First Intifada in the late 1980s. Arna’s son Juliano, who made the documentary film Arna’s Children about his mother’s work, created the Freedom Theatre after her death in 1995. Juliano was killed this past April, his murder presumed to be a political assassination.

Here’s the Freedom Theatre’s mission statement, from the company’s website.

Through its work, The Freedom Theatre aims to:
• Raise the quality of performing arts and cinema in the area.
• Offer a space in which children and youth can act, create and express themselves freely, imagining new realities and challenging existing social and cultural barriers.
• Empower the young generation to use the arts to promote positive change in their community.
• Break the cultural isolation that separates Jenin from the wider Palestinian and global communities.

In order to fulfill these aims, the following strategies are employed:
• Offering professional training in theatre and cinema for youth and young adults.
• Staging regular theatre productions which explore new and increasingly advanced artistic and technical trends.
• Raising awareness among its participants and audiences on important issues in the community and the role of arts in bringing about social change.
• Providing a wide range of drama and cinema activities for children and youth in Jenin Refugee Camp, Jenin City and surrounding villages.
• Hosting performances by theatre and performing arts groups from other parts of Palestine and abroad.
• Engaging its participants in international exchanges and building up a wide network of partners and supporters worldwide through effective advocacy and public relations work.
The Freedom Theatre has staged productions ranging from Waiting for Godot and the original devised work Sho Kman to adaptations of Animal Farm, Alice in Wonderland and Crime and Punishment.
At Yale, members of the Freedom Theatre company will present a “theatrical introduction to the theatre’s work,” screen a video of highlights from past productions, and discuss the life and work of Juliano Mer-Khamis. The New Haven stop is part of an extensive U.S. visit by the company, which recently has toured in Europe.
The 90-minute Yale presentation begins at 4:30 p.m. in the downstairs lounge of the Yale Repertory Theatre at the corner of Chapel and York streets. It’s a free event, open to the public. More info here. 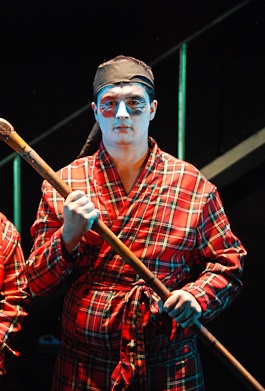 An image from the Freedom Theatre's recent production of Waiting for Godot. The actor in the photo, Rami Hwayel, is one of several students from the Palestinean theater troupe to have allegedly been taken captive by the Israeli Army.