Posted by Christopher Arnott on October 3, 2011 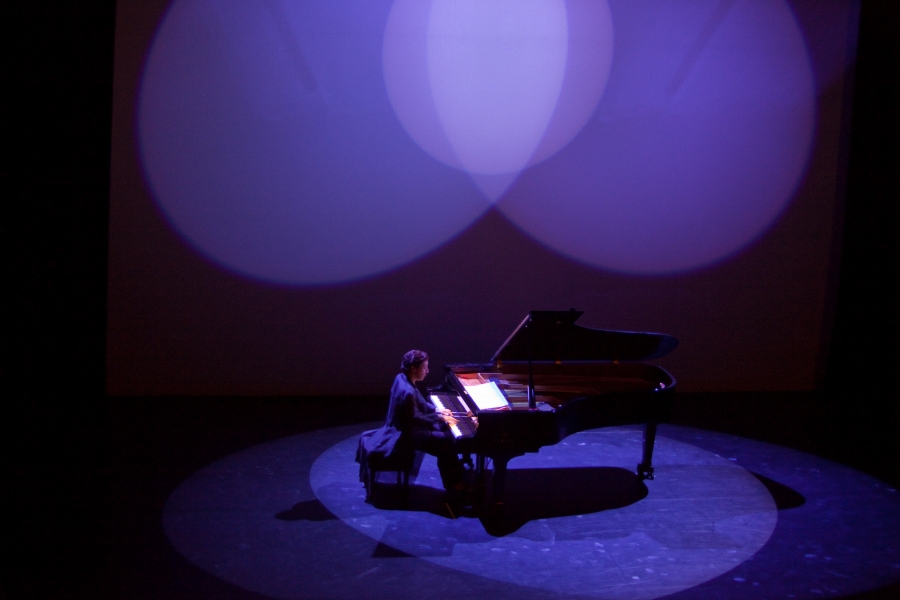 Spectral Scriabin, a collaboration of piano and lights performed by Eteri Andjaparidze and designed by Yale's own Jennifer Tipton, comes to the university's No Boundaries series in February. Photo by Chris Lee.

No Boundaries: A Series of Global Performances knows what’s bound to happen this season.

The series’ 2011-12 slate was announced last week. It represents a rare and longrunning collaboration between the undergraduate Yale Theater Studies program’s World Performance Project and the Yale School of Drama graduate program. No Boundaries presents three visiting theater or dance companies a year. Beyond the performances, there are usually related workshops and seminars. The series tends to go for artists that are pushing the bound…—let’s just say envelope this time—of language and established theatrical formats.
No Boundaries has offered an exhilarating range of good to bad, with indifference never an option.

Here they come, boundarying in:
• Nov. 3-5: The American premiere of Engagement Feminin: An Evening of West African Contemporary Dance with the Burkina Faso-based company Art’Dev/Compagnie Auguste-Bienvenue. Art’Dev is a truncation of Association Artistique Développement. The directors are Auguste Ouedraogo and Bienvenue Bazie, both of whom are in their early 30s; they founded Art’Dev in 2000. While Ouedraogo and Bazie are male, they are conscious of the lack of dances by and about women in West Africa. The hour-long Engagement Feminin piece, in which dancers “explore the everyday choices the women of their communities make,” is part of that outreach.

• Feb. 10-11: Spectral Scriabin, a solo piano concert by Eteri Andjaparidze enhanced by “illumination” of renowned stage lighting designer Jennifer Tipton.
The Russian-born but now New York-based, Andjaparidze was at Yale just last year, doing Schumann duets with Boris Berman for the School of Music’s Horowitz Piano Series. Jennifer Tipton is a leading light ‘round these parts: the 2008 MacArthur fellow teaches at the Yale School of Drama and her recent theater lighting designs include The Glass Menagerie at Long Wharf and Autumn Sonata at Yale Rep.
Such “illuminated” concerts were a huge deal on the festival circuit a few years ago—lightshow enhancements for those who’d grown up on Pink Floyd laser shows and who’d learned to sit still for classical music. Tipton’s the top artist you could hope to get for such an endeavor, and compose Scriabin himself would likely have approved of the format: he experimented with various linkings of sound, light and color, and may have had the neurological condition synesthesia, which heightens one’s sensitivity to sound to the point where it’s similar to taste or vision. The hour-long event contains excerpts from the composer’s Poeme Languide in B Major, Feuillet d’Album in F Sharp Major and Opus Posthumous.
Spectral Scriabin was performed last October at New York’s Baryshknikov Arts Center and has a California gig shortly after this Yale one.

• March 23 & 24: Neva, written and directed by Chilean political theater artist Guillermo Calderón and performed by his ensemble Teatro en el Blanco.
The Yale Rep (Three Sisters) and the Yale School of Drama (The Seagull) are both checking into Chekhov, so why not No Boundaries? Guillermo Calderon’s Neva, performed in Spanish with supertitles, is an original work set in 1905, after Chekhov’s death. On a darkly lit rehearsal stage in 1905 , the playwright’s widow Olga Knipper laments his passing, and also the passing of a way of life and a way of performing.
I was in Los Angeles this past summer, where Neva was a hit attraction at the Radar L.A. festival. One of my esteemed colleagues at the Engine28 website project, Kerry Lengel, reviewed the show, here. Another Engine28er, Ben Waterhouse, posed a technical question to Calderon—how come he staged this ostensibly historical drama around a modern space-heater appliance? Answer here. 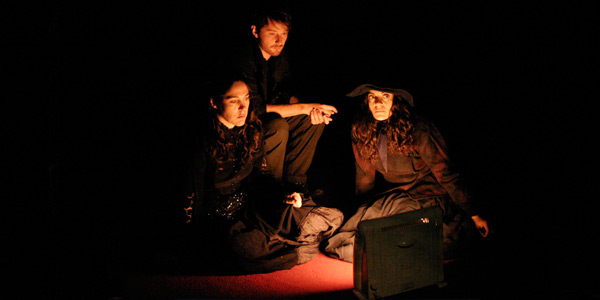 For Boundaries details, go here, and don’t forget about all the related symposia, talkbacks and workshops. This is an especially interactive and multi-faceted series, befitting the fresh and sometimes challenging concepts No Boundaries brings to town.