Posted by Christopher Arnott on September 28, 2011 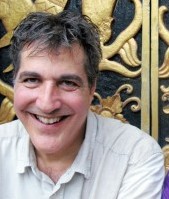 Wesleyan Center for the Arts in Middletown is premiering a new play by Ron Jenkins tonight. The reading is held at 7 p.m. tonight, Sept. 28, in the center’s CFA Hall, for free.

Must be cool to go to school where Ron Jenkins teaches.

I never studied with him, but I followed Jenkins for years in his non-academic roles of translator, director, playwright and clown. He’s worked with friends of mine and I’ve learned from his books and scholarship, much of which has to do with European clowning traditions.

But where he most stood out for me is onstage, as live translator and interpreter for the great Italian playwright and satirist Dario Fo. I first glimpsed Jenkins’ special talents in this regard back in the mid-1980s, when Fo was allowed to make one of his rare trips to the United States, where he and his wife  Franca Rame performed at Harvard and Yale. The couple’ s visa weren’t accepted again for another couple of decades; by this time Jenkins was ensconced at Wesleyan, so that’s where Fo and Rame played.

If all he was good for was bringing Dario Fo and Franca Rame to Connecticut every once in a while, and translating their brilliant writings, and writing his own books about them, I’d think Ron Jenkins was just great. But there’s more. Jenkins is a teacher and scholar with a bent for political, topical and socially conscious stagework. That could seem deadly to some, except that his other passion is clowning. Even the most serious and severe Jenkins projects don’t forget to entertain.

He’s a great fit for Wesleyan, where multiculturalism and progressive thought are classroom tools as frequently utilized as pen and paper.

All this is preface to a special Ron Jenkins event on the Wesleyan campus Sept. 28. It’s a reading of a new Ron Jenkins play, Recycling Pain. The project grew out of Jenkins’ ongoing collaborative theater work with incarcerated and recently incarcerated men and women, not just in the United States but in Italy and Indonesia.

It’s Jenkins’ desire as an artist to counter social stereotypes associated with prisons, which is interesting enough for any theater project. But the play also has a major environmental theme. Here’s the description from the Wesleyan press release:

Recycling Pain is based on Mr. Jenkins’s work over the past four years, including interviews with incarcerated men and women in Italy, Indonesia and the United States who were inspired by the poetry of Dante’s Divine Comedy to reflect on the consequences of wasting energy. Their observations are reminders that the importance of conserving and recycling the human resources in our jails is no less important than the challenge of conserving and recycling the natural resources of the planet. Recycling Pain was also compiled from the Department of Justice Report on the Federal Prison Industry’s electronic recycling program.

Recycling Pain was commissioned by the Wesleyan Center for the Arts for its annual environmental-consciousness program Feet to the Fire. More info on that is here.

Saundra Duncan, Lynda Gardner and Deborah Ranger are in the cast and Ala Faller provides music.

Posted under European Theater,Politics,Previews,Uncategorized,Wesleyan Center for the Arts
Comments (0)