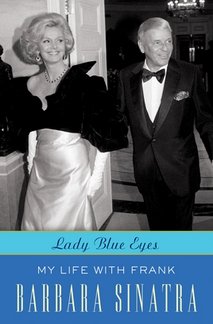 Not that I care nothing about Frank Sinatra, but the reason I got Lady Blues: My Life With Frank out of the library was that, before Barbara Ann Blakeley became Mrs. Frank Sinatra, she was Mrs. Zeppo Marx.
Few words are expended anywhere in print on the fourth, straight-man Marx brother. Zeppo left the act after their five Paramount films, never rated a biography, and never rated a biography. There are really only one Marx Brothers bios where Zeppo’s later life is given much ink at all; usually the historians limit themselves to Zeppo’s conduct during Groucho’s time with the controversial Erin Fleming. (Zeppo, countering his other siblings, supported Erin’s conservatorship of the ailing, smitten Groucho).
Barbara Sinatra’s book has pages of personal anecdotes about life with an aging Zeppo—how he behaved toward her son from her previous marriage, the extent of the fortune he’d gained from his manufacturing and inventing careers. (Other books downplay these lucrative pursuits, tending to mention his exploits as a Hollywood agent instead.) There are suggestions that Zeppo could be callous and shallow, but also many instances of his renowned sense of humor. (The more hyperbolic bios of the brothers trumpet that Zeppo was the funniest Marx offstage.) We experience Zeppo’s feelings at the death of his eldest brother, Chico. Since Barbara began seeing Frank Sinatra while still married to Zeppo, there’s a steady chronicle of how and why she and Zeppo drifted apart.
Of course, there are stories about the other Marxes. There’s a photo of the “future brothers-in-law” at Zeppo & Barbara’s engagement party. In the text, Groucho appears as foulmouthed as he does in Richard Anobile’s wonderful warts-and-all Marx Brothers Scrapbook. When, one Easter, Barbara introduces Groucho to a family with nine kids that Zeppo had out to lunch so that he could get the electric chord organ he’d decided to buy for Barbara as soon as possible, Groucho sauntered by, noticed the number of offspring, and commented “Been doing a lot of fucking, haven’t you?” Meanwhile, Harpo’s reputation as the sweetest of the Marxes is unruffled. 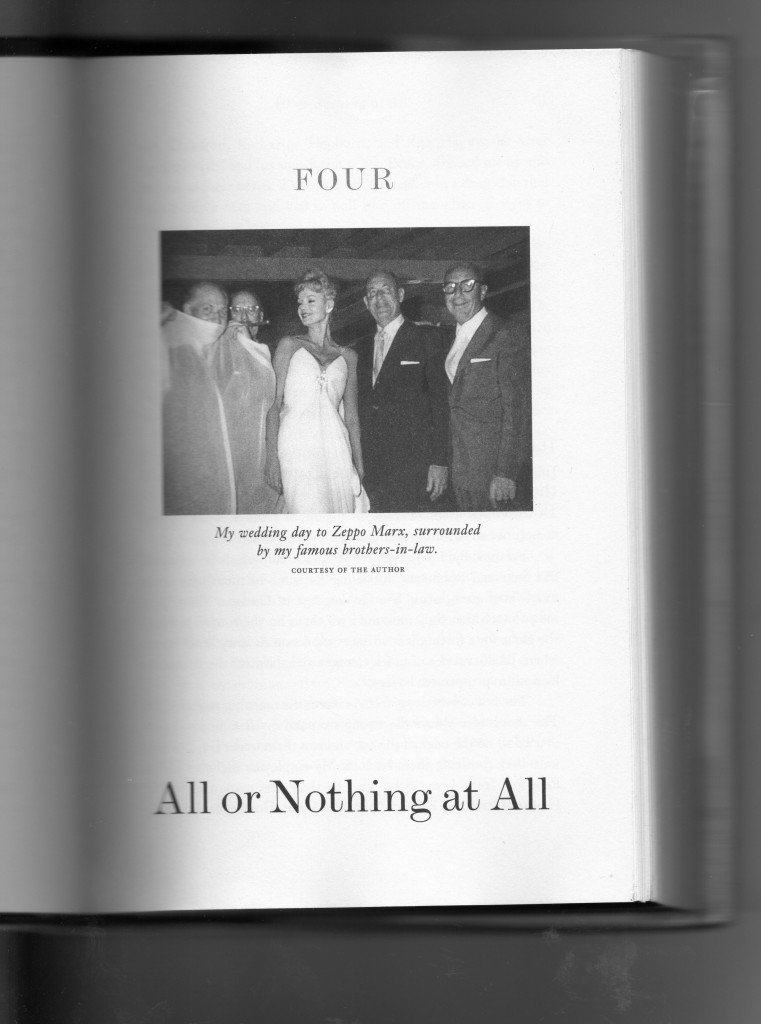 As a reader who came looking in Lady Blue Eyes for tidbits about stars other than Sinatra, I was further rewarded by an item where Barbara recalls working on a TV show with Ernie Kovacs—an opportunity she’d gotten through Zeppo. “Ernie was wearing a a huge false mustache, which I was supposed to find ticklish when I kissed him.”
Some of the reminiscing is supported by bad scholarship—Barbara (or her collaborator Wendy Holden) writes that Harpo’s “given name was Arthur,” when in fact it was Adolf and was later changed. But Barbara Sinatra doesn’t stint with her memories of her husbands before Frank. This is not a reference book but a dishy reminiscence, and as that it hits its Marx.

One Response to Lady Zeppo