Posted by Christopher Arnott on June 7, 2013 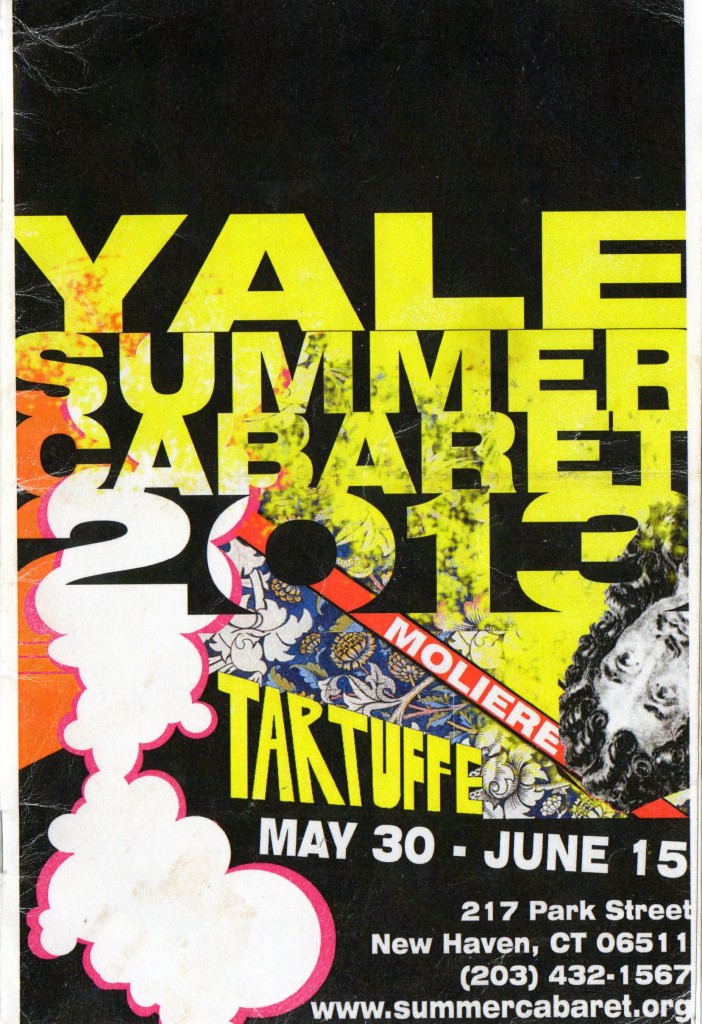 Moliere’s Tartuffe is the opening  blast in a Yale Summer Cabaret season that appears so “conventional” it’s positively unheard of. Not that Yale School of Drama student-run theater projects haven’t done Moliere before–or Tennessee Williams or Caryl Churchill or Federico Garcia Lorca or August Strindberg, the other playwrights on this summer’s slate–but you have to go back quite a few years to find an entire SumCab season of playwrights which average theatergoers have heard of. (I’m not counting the all-Shakespeare season of 2011). Not to mention an acting ensemble which is so efficiently utilized as a full-blown repertory company.

Nine of the ten members of that ensemble appear in Tartuffe. Those in the smaller roles are assured of grander opportunities later in the summer. When not in a given show, the actors will act as waitstaff during the Cabaret dinner-serving hour.

As a summer stock veteran myself (from age 3 to 8, with the Ledges Playhouse in Grand Ledge, Michigan, back in the mid 1960s), I could wax eloquently about the pleasures of a true repertory stock season. But let’s praise instead that rarer, more precious thing: an even-handed, balanced, well-thought-through, riotous yet dramatic, wild yet not completely over-the-top Tartuffe.

Tartuffe’s plot is simple—Tartuffe cons the wealthy Orgon, to the dismay of Orgon’s wife Elmire, their children (including a daughter whom Orgon is willing to betroth to Tartuffe rather than let her marry her true love Valere) and others who hang around the mansion which defines what’s really at stake here.

Yet Tartuffe is the kind of comedy which, due to changing and more enlightened times, can’t ever again be funny in the way it originally was. What was first found offensive about it—the idea that religion can be exploited by charlatans, a concept once considered heretical—no longer bothers us, while its attitudes toward women and children can now shock well beyond the bounds of exaggerated farce.

What has challenged directors in recent centuries, as with Taming of the Shrew, is the high level of sexism and domestic abuse that must not just be tolerated in the play but turned into comic hijinks. One critical subplot involves Orgon forbidding his daughter to marry the man she loves and instead betrothing her to Tartuffe. Another has Tartuffe lusting after Orgon’ s wife Elmire to the point where he attempts to have sexual relations with her forcibly against her will.

My father wrote books on Moliere and staged and translated many of his plays. I’ve seen oodles of Tartuffes over the years, including recent ones in Connecticut at the Yale Rep in 2007 and Westport Country Playhouse just a couple of years ago. I’ve seen the play done as virtual tragedy and as oblivious cartoon cut- ups. The show’ s large cast needs can often lead to an inconsistency of acting styles, and the play is written in such a way that, depending on the perspective, you’re not sure which leading character might be considered the starring role. The title character doesn’t appear until the third act. The level- headed wife Elmire, another latecomer to the action, rises neatly to the stature of heroine in some productions. The maid Dorine, like so many menial servants in comedies of this period, gets moist of the best lines. The vituperative elderly mom Miss Pernelle dominates the opening scene of the play, then disappears for a very long time. There’s also a weepy lovestruck daughter, a hothead son, a good-natured quasi-rational in-law.

With so many people jockeying for attention, an untethered production of Tartuffe can be a free-for-all.

Director Dustin Wills hews close to plot here, doesn’t mess with relationships beyond the accepted stereotypes, and simply allows the cast a lot of room to move about. For such a small underground black-box space, the Summer Cabaret has assembled a thrust stage that nearly rivals that of a “regular” theater. That thrust will apparently be used for the entire summer season, augmenting the “traditional” aura of the season and the repertory ensemble model.

So how trad is the acting? The style here is what you might call comic metaclassical. Costume designer Seth Bodie has put a note in the program explaining that his concept is a blend of upper class affectations of various eras and not confined to the ruffles and plumage of Moliere’s era. This method seems to fit Dustin Wills’ directorial take precisely.

As it happens, most of the prevailing cultural connectors in this approach are not French but British. The set is more drawing-room than mansion. The dialogue, thanks to Richard Wilbur’s tyrannic verse, is clipped and enunciated. Mickey Theis, a versatile young actor who normally would be cast in lean, hungry, angry roles, comports himself (as Orgon’ s brother and confidante) in fat suit and vest in a manner suggesting Terry Jones of the Monty Python troupe.

I could assess in detail the various performers here (and actually do a bit of that in my review of the show for www.ct.com, here). But it’s far more complimentary in this instance to discuss how well they work together as an ensemble. Moliere wrote his plays for a troupe of colleagues who fell easily into the stereotypical roles assigned them. For this groups of Yale School of Drama classmates to so quickly grasp a consistent communal comic tone for Tartuffe, with minimal rehearsal time and knowing that in future weeks they’d be shifting to Strindberg, Tennessee Wiliams, Federico Garcia Lorca and Caryl Churchill modes.

There’s a lot that’s refreshing about this Yale Summer Cabaret experience, from the chocolate mousse on the dessert menu to the “want some licorice?” line from the Moliere script which takes on a whole new meaning when growled by Mamoudou Athie as Tartuffe.

The plot holds. So does the fantasy of the play’s ending. The physical shtick doesn’t distract from the verse translation. The dreaded seduction scene succeeds. All is well in funny old faux France, and in summery New Haven. 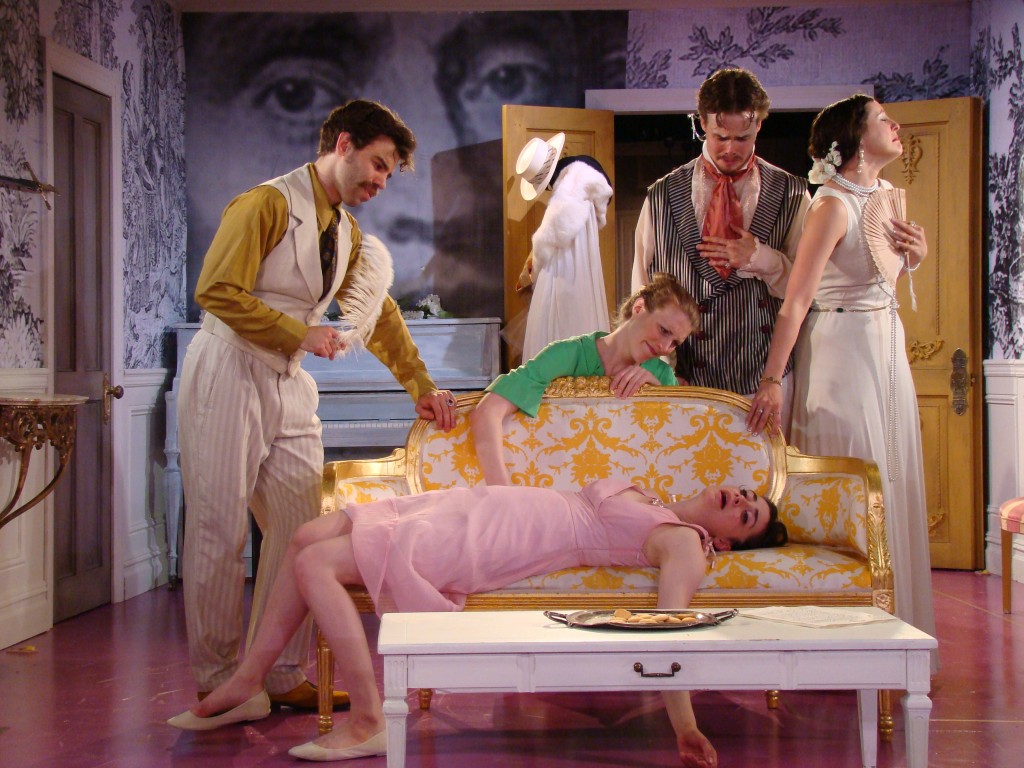 2 Responses to The Tartuffe Review