Posted by Christopher Arnott on June 4, 2013 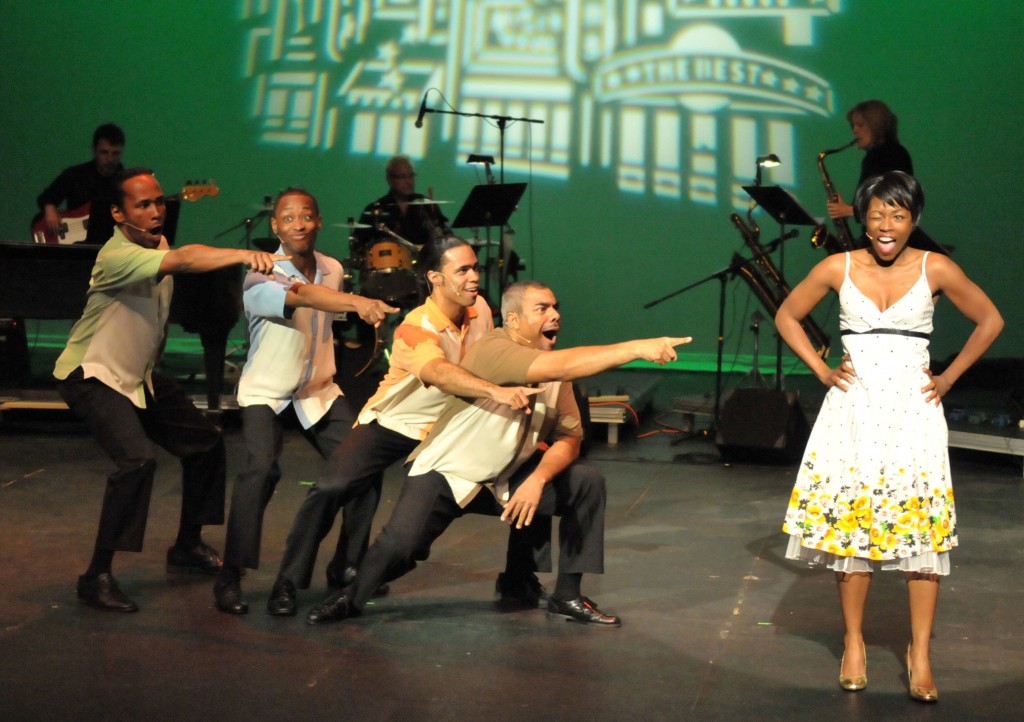 The Long Wharf Theatre has a tour of Smokey Joe’s Café coming July 10-28. Pretty active summer for the Long Wharf, which just hosted a tour of the McCourt Bros. two-hander A Couple of Blaguards (while the mainstage season was concluding with Clybourne Park), has their annual gala—anchored by a performance of Mandy Patinkin’s one-man show Dress Casual—on June 7, and is once again being used as a key stage in the International Festival of Arts & Ideas, for the East Coast premiere of the new musical theater piece Stuck Elevator by New Haven-based playwright Aaron Jafferis and composer Byron Au Yong.

The Smokey Joe’s Café tour is produced by Supreme Talent International which seems to specialize in jazz, jive and gospel musicals. Currently on the company’s roster: Sophisticated Ladies, Ain’t Misbehavin’, Your Arms Too Short to Box With God, Five Guys Named Moe and this Lieber-Stoller revue, not to mention “Anomal—World’s Greatest Mentalist Ehud Segev,” the girl-group pastiche Broadway Dolls and various tribute acts, some of which (such as Bruce in the U.S.A.) have played at the Downtown Cabaret Theatre in Bridgeport.

If you read the autobiography of Jerry Lieber (who died just a couple of years ago at the age of 78), Smokey Joe’s Café comes off a sort of validation for decades during which Lieber and his songwriting partner Mike Stoller sought to be taken seriously in legit theater circles. The men were of course revered as pioneers of rock & roll, having written “Hound Dog” and “Stand by Me” and hundreds of other hits. They’d kept up with pop trends admirably, shifting from roots-rock to the girl-group harmonies of the Shangri-Las and the morbid Peggy Lee hit “Is That All There Is?” But they’d had several disappointments in the theater realm, including a musical adaptation of Mordechai Richler’s The Apprenticeship of Duddy Kravitz which was thwarted by a weak book.

Smokey Joe’s Café, an ensemble revue strung together from dozens of Lieber/Stoller hits, was a major international success. Though it’s not so different in format, it seems to have been much more influential than Ain’t Misbehavin’ in inspiring other pop “jukebox” shows. It’s become a community theater staple and it seems like there never hasn’t been a tour out there. With the deaths of many of the performers who made these songs famous, it’s nice to have a place where audiences can still seek out these tunes live.