By George! Jeffrey Hatcher, on How He Rekindled The Killing of Sister George

Posted by Christopher Arnott on December 18, 2012 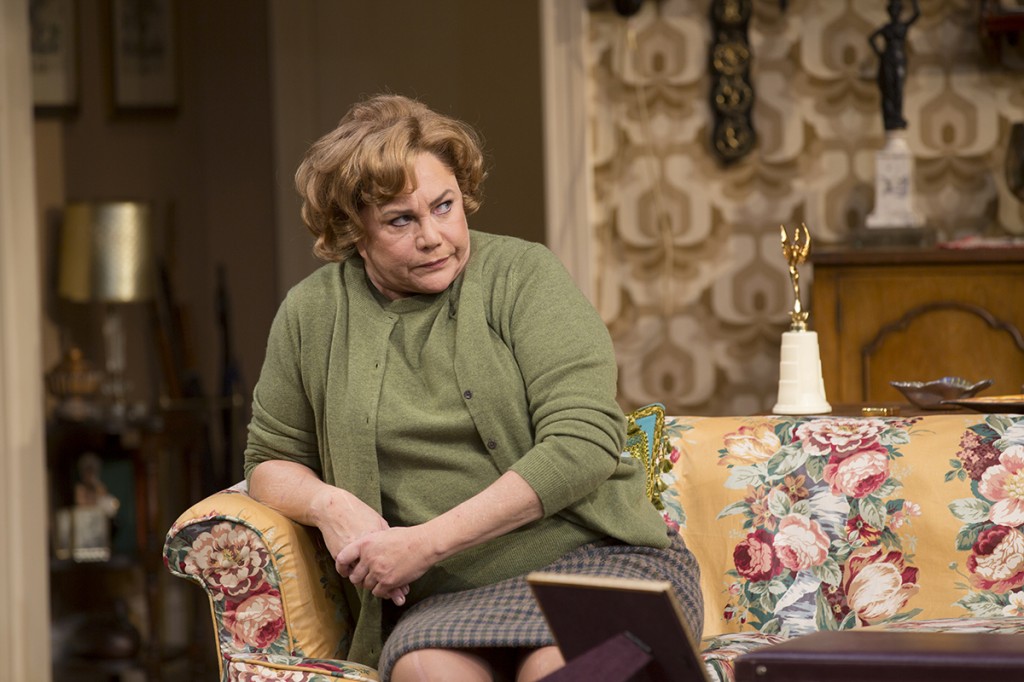 Kathleen Turner in the new version of The Killing of Sister George, adapted by Jeffrey Hatcher from the 1964 script by Frank Marcus. Through Dec. 23 at the Long Wharf Theatre.

The Killing of Sister George ends this week at the Long Wharf Theatre. It’s a noble attempt to reinvigorate and restage a well-known, if misunderstood comedy from the turbulent 1960s London theater era. The play, by a British playwright of German/Jewish parentage known for his stageworthy culture-hopping adaptations of works by Schnitzler, Molnar, Hauptmann and Kaiser, has now itself been adapted for new audiences. The Killing of Sister, about a self-involved actress, her submissive young flatmate/lover and her alternately empathetic and no-nonsense employer, retains its 1960s sensibilities but creates its own pace and mood, geared to the still-gravelly voice and aggression of this production’s star and director Kathleen Turner

But Turner’s not the only one twisting the dials on this not-as-dark-as-you-think comedy’s recalibrator.

While the show was still in previews, I had a phone interview with Jeffrey Hatcher, whom Turner had enlisted to revise Frank Marcus’ original script. I’ve long admired Hatcher for his uncanny theatrical instincts. Whether with his original plays or with his many adaptations of classic works from other media, Jeffrey Hatcher finds intriguing new structures and tones in his projects that make them naturally playable. His works are embraced by college theaters (I fondly recall a Yale Summer Cabaret production of his three-actor Turn of the Screw), mainstream community theaters (he did the stage version of Tuesday With Morrie), and especially regional theaters. When I ask him which theaters he can comfortably call up and offer new projects to, he reels off half a dozen without pause—the Guthrie, Arizona Theatre Company, Cincinatti Playhouse, Cleveland Playhouse, Milwaukee Rep and several others.

A Hatcher script was done at Long Wharf just a couple of seasons ago; the framing scenes he provided for the biomusical Ella, strengthening a production which had begun at Hartford’s TheaterWorks with a different script but a similar set of Ella Fitzgerald song standards. Hatcher downplays his Ella efforts as “expectations which I hope were met,” and says it was difficult to build a convincing first-person drama around “somebody who was so famously reticent.”

The guy who got Jeffrey Hatcher to start adapting works of other writers was none other than Greg Leaming, the former Literary Manager at Hartford Stage and the Director of Artistic Programming at the Long Wharf Theater, who leapt into the breech as the Long Wharf’s Acting Artistic Director for a season when Doug Hughes abruptly left in 2001.

“It was Turn of the Screw,” Hatcher says. “I hadn’t done adaptations before, and it was not a straight-up adaptation.” He’s since done many, none of them straight-up, including a Dr. Jekyll & Mr. Hyde in which four members of the six-person cast gets a chance to be Hyde, stories by Edgar Allan Poe and Wilkie Collins, Herman Melville’s novel Pierre and reworkings of plays by Shaw, Goldoni and Anouilh.

The new version of The Killing of Sister George was done with the blessing of the late Frank Marcus’ family and estate. Unlike, say, Grease or The Graduate, this is not a stage revision beholden to a well-liked film adaptation of the source material. The 1968 movie version of The Killing of Sister George is notorious for its wrongheaded  emphasis on swinging London environments and sexual themes which in Marcus’ play are more atmospheric and not to overwhelm the plot and characters. But the play itself had developed its own problems. “There was a London revival,” Hatcher explains, “and it didn’t do well.” That was just in 2011, at the Arts Theatre in the West End, starring Meera Syal and directed by Iqbal Khan. “It has had American revivals, but they’ve tended to be further off the beaten track. Nothing with the status of Long Wharf, or with New York aspirations.

“I’d never seen it onstage. I read it a long time ago—I have that old paperback copy with the red lipstick on the cover. The movie is famously disliked by everyone—the performances are all outsized, except Coral Browne. You can’t imagine Beryl Reid playing it that way onstage.”

Hatcher joined this attempt to realign the play after director/star Kathleen Turner had already held a reading of it and realized its shortcomings. “I thought the original energy came from the ‘Oh, my god, they’re lesbians’ element,” Hatcher ruminates. “It struck me that it might need a little more plot. There wasn’t not any shock value you could use to gin it up anymore.

To that end, the adapter says, “we ramped up the radio element.” The plot of  Killing of Sister George, in which a beloved actress is abruptly kicked off a popular radio show, relates to a real-life broadcast scandal when the BBC did away with a key character, Grace Archer, on its popular soap opera The Archers, reportedly to jack up ratings and withstand competition from the just-launching ITV network. The situation by which Sister George is “killed” in The Killing of Sister George is somewhat different, and more entertaining: the actress playing the good-hearted character in the show-within-a-play, June, is a foul-mouthed loose cannon and a mountain of insecurities, whose public behavior has earned her disciplinary action from an executive at Broadcasting House, the BBC Radio headquarters. Hatcher compares it to Maclean Stevenson leaving M*A*S*H and the producers having his character die in a helicopter crash to make clear that he was never being invited back on the show, or Charlie Sheen’s imbroglio with Two and a Half Men.

Hatcher feels that Frank Marcus’ original script telegraphed the play’s ending way in advance, so his version maintains some suspense. Ultimately, he feels he had a comfortable amount of leeway in revising The Killing of Sister George because while the title is familiar enough to provoke interest, it’s really “something the audience kind of thinks they know.” But they don’t know it so well that they’ll notice Hatcher’s hand in it. He likens it to an adaptation he did of  The Inspector General, where he knows which are his jokes and which are Gogol’s, but most viewers won’t.

The success of The Killing of Sister at Long Wharf ultimately rises or falls due to the work of its director/star Kathleen Turner, who clearly sees the role of June/George as a grand stage character around which the rest of the show revolves. But even if it’s about explosions and chewed scenery, somebody’s got to be minding the details, and you’re in good hands if that person is Jeffrey Hatcher.

5 Responses to By George! Jeffrey Hatcher, on How He Rekindled The Killing of Sister George