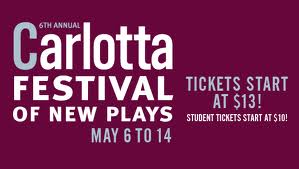 Tonight marks the start of the sixth annual Carlotta Festival of New Plays at the Yale School of Drama.

I had coffee this morning at Willoughby’s on York Street with the three playwrights for whom the festival marks the end of their three years in the School of Drama program. No tech-week anxiety or opening-night jitters in evidence. That’s what an Ivy League education can get you. We had a thoughtful discussion about process, education and personal goals.

This is the first group of playwriting students who’ve gone through all three years of the program with department chair Paula Vogel, who took the gig in 2009.

All three are in the thrall of Vogel, and more than one of them admits that she’d have applied to Brown (where Vogel taught for over 20 years) had the Pulitzer-winning playwright and revered teacher still been there and not joined the Yale faculty three years ago.

For Christina Anderson, whose Blacktop Sky concerns a homeless man living in the courtyard of a housing project, coming to Yale was about “working with Paula and having time to write. I had been working as a paralegal, and assuming that I’d be able to write while doing 100-hour work weeks. I had lots of first drafts. It was time to write.”

“I would echo that,” says Dipika Guha, author of Passing, a drama which deals with concepts of loss, memory and survival.

“Paula builds this amazing community,” adds Meg Miroshkin, whose sports-themed smalltown adventure The Tall Girls is the third of the three Carlotta Plays to premiere this weekend. “This was an opportunity to enter that community.”

Vogel’s reputation as a teacher is exalted, and well deserved. Yet her coming to New Haven augmented, rather than jumpstarted, an already strong Yale playwriting program.

Case in point: The Carlotta Festival. Founded with a bequest from Eugene O’Neill’s widow Carlotta Monterey, it’s an ideal forum for Vogel’s stated goals of giving students a real showcase for their work. But the festival was the brainchild of Vogel’s predecessor, Richard Nelson. Like Vogel, Nelson is a prolific, oft-produced, internationally renowned playwright able to impart not just writing tips but real-world experience in the sometimes treacherous world of commercial theater. In the six years since the new-play festival was founded, many of the student playwrights have said that the existence of the Carlotta Festival was what clinched their decision to apply to Yale.

The Carlotta lets playwrights experience full productions rather than readings of their work, and lets them work closely with directors and designers, exhibiting the results before large “real” audiences. It offers a collaborative process and an opportunity for feedback on a scale much grander which the students have experienced through class projects and more limited school productions of their work. This year’s three full-length Carlotta shows play in repertory May 6-8 and 10-14, each getting seen four times.

This year, the Carlotta Festival is more of a conscious showcase than ever. The final two days of the the 10-day festival have been designated “Professionals Weekend.” Producers, managers, agents and other industry types have always been represented in Carlotta audiences, but this is the first time they’ve been so actively courted and accommodated.

“Definitely, the Carlotta is the only opportunity to work with so many of the other departments” at the School of Drama, says Christina Anderson, whose Blacktop Sky opens the fest tonight. “It’s the one time we get that in this program.” But, she stresses, “there are so many opportunities here—tutorials, labs, different levels of productions.” All three writers availed themselves of the extracurricular Yale Cabaret—which presented an earlier version of Guha’s Passing in March of 2010, Anderson’s Hollow Roots this past January, and two different works by Miroshnik (A Portrait of the Woman as a Young Artist in April 2009 and Good Words in Sept. 2010).

Despite all the showcase trappings, both the School of Drama and its level-headed students want to assure that the scope and hype of the Carlotta Festival doesn’t restrict its value as a place to explore and experiment. It’s a telling point that all three of this year’s Carlotta plays came out of a Paula Vogel classroom exercise—her renowned “bake-offs,” where students are given a textual jumping-off point (a fable or myth, perhaps) or other simple ingredients (an aesthetic style, maybe an emotional state) and are instructed to bash out a basic script with the space of two days. Vogel can conduct two or three bake-offs a year.

The pace of the assignment means “the sensor part  of your brain just shuts down,” Miroshnik explains. “You shut down the inner critic, and the work just flows.”

While Guha’s Passing didn’t come directly from a bake-off, it was a later response to a theme she encountered in the classwork. She agrees that the quick-thinking process helps filter out distractions and discourages “overthinking.”

This is also a chance to use Yale and community resources to their fullest. The playwrights could write with specific performers in mind, or with the sense that certain technical demands could be met.

Anderson, Guha and Miroshnik all say they’ve gained from the open collaborative process which guides the Carlotta Festival. It’s something of a whirlwind experience—they didn’t have to make a final decision about which of the scripts they’ve been working on would be their Carlotta show until last December. Directors from the graduating class of School of Drama’s directing program were assigned (namely Devin Brain for Blacktop Sky and Charlotte Braithwaite for Passing, with recent alumnus Mike Donahue stepping in to direct The Tall Girls since the other graduating student director, Michael McQuilken is involved in a show in New York). Casting was done in January. Designers and other collaborators cleared their decks of other school obligations within the last couple of months. The Yale Cabaret learned a few seasons ago to change when they end their seasons so that they’re done by Carlotta time. The festival consumes the entire drama school, and provides an exceptional send-off for classmates who’ve formed strong bonds through the dozens of theater projects they’ve done in their three years of graduate study.

“For me personally,” Anderson says, “the Carlotta is more sentimental than anything. It’s the last time I’ll see some of these people. Surprisingly, it’s turned into a really fancy goodbye.”

All the playwrights happily attended rehearsals and rewrote their plays as needed. “I actually haven’t stopped rewriting,” Miroshnik laughs, two days before the May 8 debut of her Tall Girls. “Part of the rewriting I did was to cover a transition”—a problem she didn’t notice on the page but could see clearly when actors enlivened it. Miroshnik’s play, about female basketball players in the 1930s, also has some built-in variable that lead to improvisation: “The balls don’t always do what’s expected. Something new always happens.”

Anderson says she hasn’t had to do much rewriting due to a productive week of “table work”—when the actors first get together to read and discuss the script—at the beginning of the rehearsal process. “I don’t do well with actor talk,” she confesses, and tends to have director Devin Brain “translate” the actor’s needs. Still, it’s “a really open room,” she smiles. “People in my rehearsals are not afraid to say ‘I don’t know.’”

Guha also says she “didn’t do much rewriting.” The rehearsal process, she says, “raises a lot of questions. They’re not all questions we want to answer, but it’s the correct evocation of those questions.”

Anderson, Guha and Miroshnik have all had plays produced professionally elsewhere,  and feel that they’ve had plenty of good and open exchanges with directors and actors where they felt their opinions were respected.

As Christina Anderson puts it, “my priority is to learn with every assignment. I chose this play based on whether it was ready for a workshop. I wanted to see it on its feet.”

“You get to work on something,” Meg Miroshkin says, “that you’re excited to invite someone into.”