The Bell, Book and Candle Review 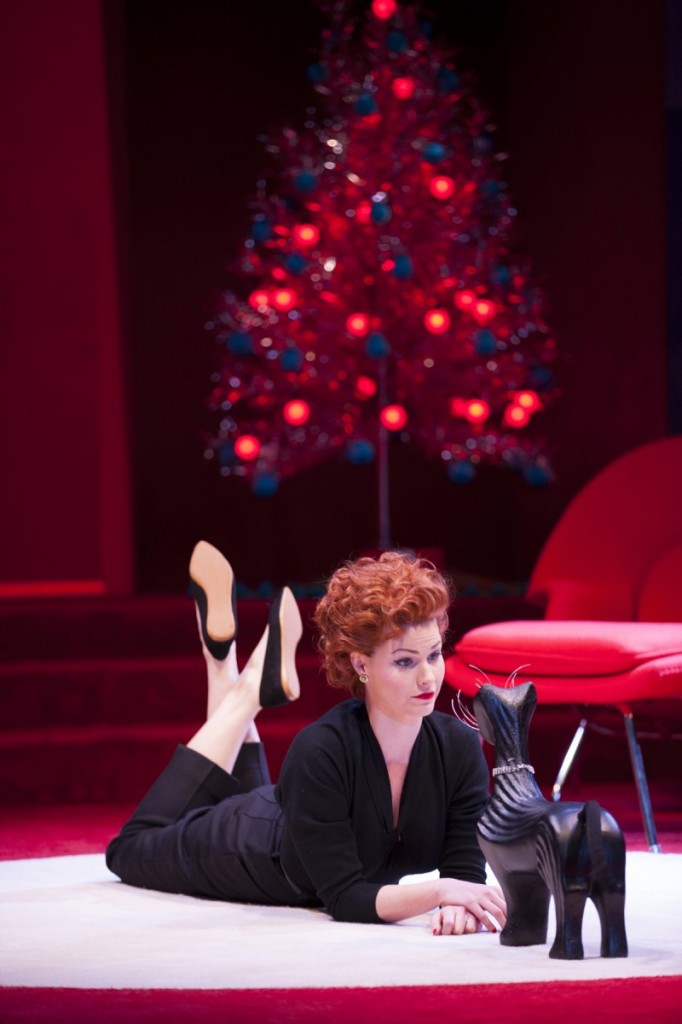 To say the TV series Bewitched was beholden to Bell, Book and Candle isn’t altogether true. John Van Druten’s 1950 play has a magic all its own. The dark kind.

Darko Tresnjak’s production (first done on the West Coast a few years ago, now at Long Wharf and headed to Hartford Stage next month) shows how cleanly the BB&C characters can line up with the beloved 1960s TV sitcom. As winsome witch Gillian Holroyd, Kate MacCluggage—in her second Christmas-themed Long Wharf show in a row, following It’s a Wonderful Life——evokes Elizabeth Montgomery (or at least her hair does; MacCluggage plays the role as a cross between young Katherine Hepburn and young Jane Fonda). Michael Keyloun minces up Gillian’s brother Nicky a la Paul Lynde’s Uncle Arthur on the TV show, while Ruth Williamson’s Aunt Queenie vaguely resembles Agnes Moorhead’s Endora with the dithery wonderment of Marion Lorne’s Aunt Clara. Robert Eli, as the mortal Shepherd Henderson for whom Gillian falls, makes an agreeable Darrin, achieving a curious cross between Tab Hunter and Robert Carradine. 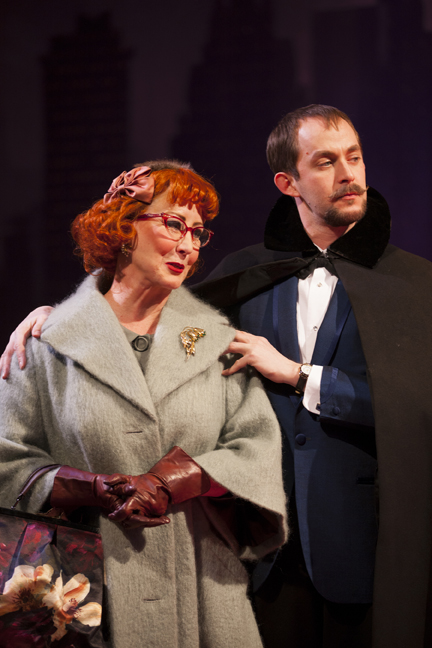 Ruth Williamson and Michael Keyloun as Aunt Queenie and Nicky in Bell, Book & Candle at the Long Wharf. Photo by T. Charles Erickson.

Not that kids today would get these references. Bewitched was a 1960s show; even the ‘90s reruns on Nickelodeon are now cause for nostalgia, and the series is now just one of zillions accessible on Hulu.com. The 2005 Will Ferrell/Nicole Kidman movie version is best forgotten, except for demonstrating what’s wrong about most witchy comedies and what’s right about Bell, Book and Candle: the smoke and spectacles and trickery can only get you so far. All-powerful characters aren’t funny. They need to have something to lose.

The joke of Bewitched is that a man has married a witch. The set-up in Bell, Book & Candle is that when a witch falls in love, she loses her powers. The play’s real kindred spirit is Noel Coward’s classic Blithe Spirit (done by Long Wharf Theatre in 1998, as it happens), in which the ghost of a man’s ex-wife haunts him and his new bride until they’re all able to move on emotionally to their new circumstances. That’s the real charm of Bell, Book and Candle: watching witches acclimate to their surroundings.

The environment in question is a lavish, splashy red apartment in Greenwich Village. The Village: mysterious hipster hang-out of the 1950s, Gay Liberation birthplace of the 1970s, gentrification mecca of the 1980s and still an enchanted fantasyland today.

Staging Bell, Book & Candle in 2012 (though the production is wisely still set in the “early 1950s”) adds several layers to Van Druten’s already ruffled original. He was writing of witches keeping their community secret at a time when “witch hunts” referred to the McCarthy hearings. Moreover, as Long Wharf Artistic Director Gordon Edelstein points out in his program notes, “Van Druten, a closeted homosexual in a time when homosexuality was a significant taboo and the cause of much personal shame, writes of sexual love between a member of one hidden subculture and the more dominant ‘straight’ culture.”

These subtexts are now overt. The witches’ and warlock’s worries over what will happen to them if they are found out have historical gravity due to the rabid Red-baiting and blacklisting which consumed much of the decade following this play’s premiere. 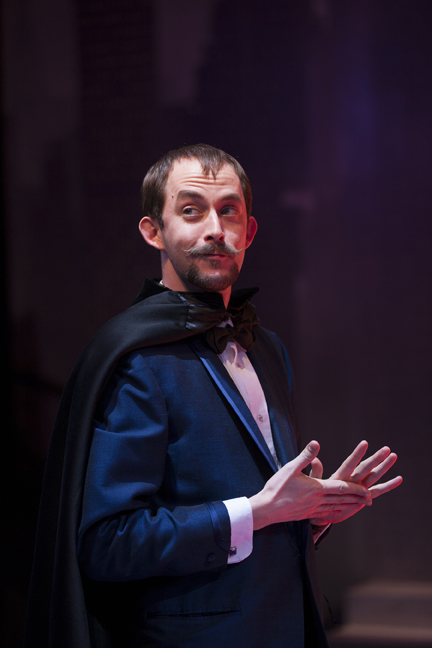 Brother Nicky is played as if he were out and proud, happy to flaunt his lifestyle to the dishy non-fiction author Sidney Redlitch (Gregor Paslawsky, last seen at Long Wharf as Lenin in Travesties, skewing admirably close to Ernie Kovacs’ portrayal of Redlitch in Bell, Book and Candle’s 1958 movie version). The heterosexual undertones are now overtones too—when Gillian falls for neighbor Shep, sparks don’t just fly; you’re led to believe they’re having wild sex right there on the living room floor.

There’s also a kinder, gentler refrain added to this dischord: an admonition to let beautiful, classy people alone. This is the more recent image of lower West Side New York City; movie stars who take out the trash and hang out at the neighborhood bars and don’t want to be made a fuss over. That desire is in here too.

That’s a lot of depth for a comedy which in its structure and construction is generally unremarkable. There are some sweet one-liners and a brainy quality to the dialogue, but you always know how it will end.

Tresnjak is known for the lush styles in which he upholsters his productions. Here he uses space-age lounge chic to define Gillian’s apartment and lifestyle, from the sleek fireplace to the Yma Sumac mambos in the sound design.

Unfortunately, the pacing of the show doesn’t match the peppy musical soundtrack. The actors take their cues from the predictable drama, not from the clean, brisk tunes (“Santa Baby,” “Witchcraft”) which open and close each scene. Stopping for two intermissions doesn’t help. You constantly brace yourself for big special effects, the kind that theaters routinely do these days with crazy lights and smoke machines and projections, but when the spells are cast they’re underwhelmingly old-school.

Hearkening back to old theater formats and traditions—the leisure, the familiar build-ups to certain conclusions, those two intermissions—while allowing for up-to-date ironies and attitudes, and adding luster from eras in between, makes for disjointed evening in the theater. I’m in favor of the attempt, just wish it had gone a bit further in several respects. I also can’t help niggling at the concept: If you’re so keen to broadcast a gay metaphor at the play’s core, why not make the Gillian character a man?

There is insight and delight to be found in this unearthed piece of 1950s Broadway glitter. But as a magic trick, you can see too easily behind the curtain. 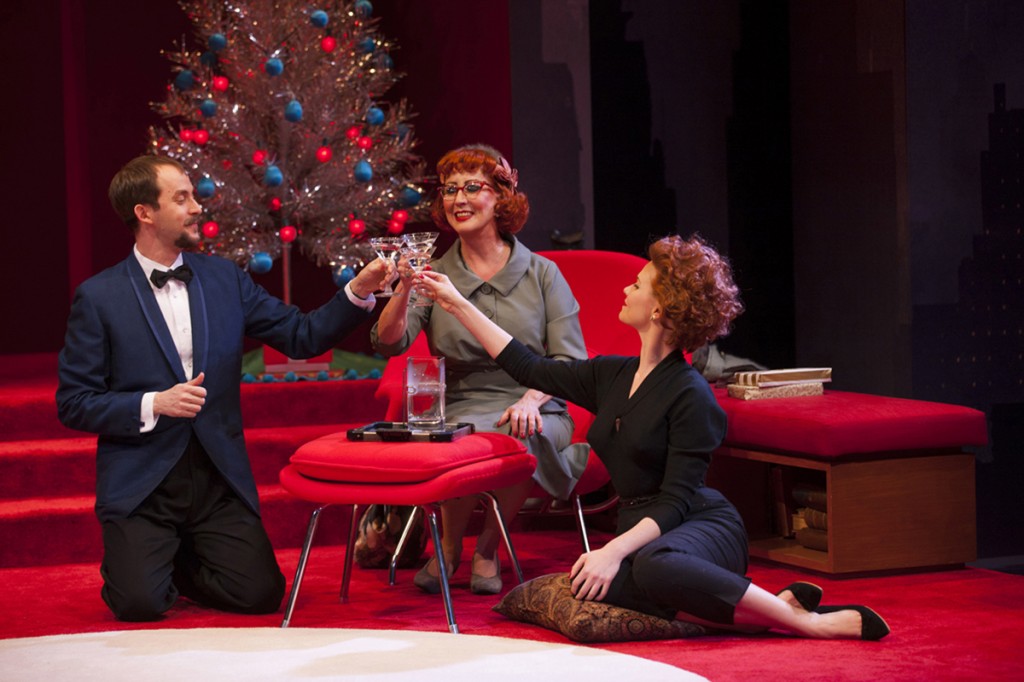 The Holroyd siblings and their Aunt Queenie in Bell, Book & Candle at the Long Wharf. Photo by T. Charles Erickson.

5 Responses to The Bell, Book and Candle Review