The Waiting for Lefty Review

Posted by Christopher Arnott on March 3, 2012 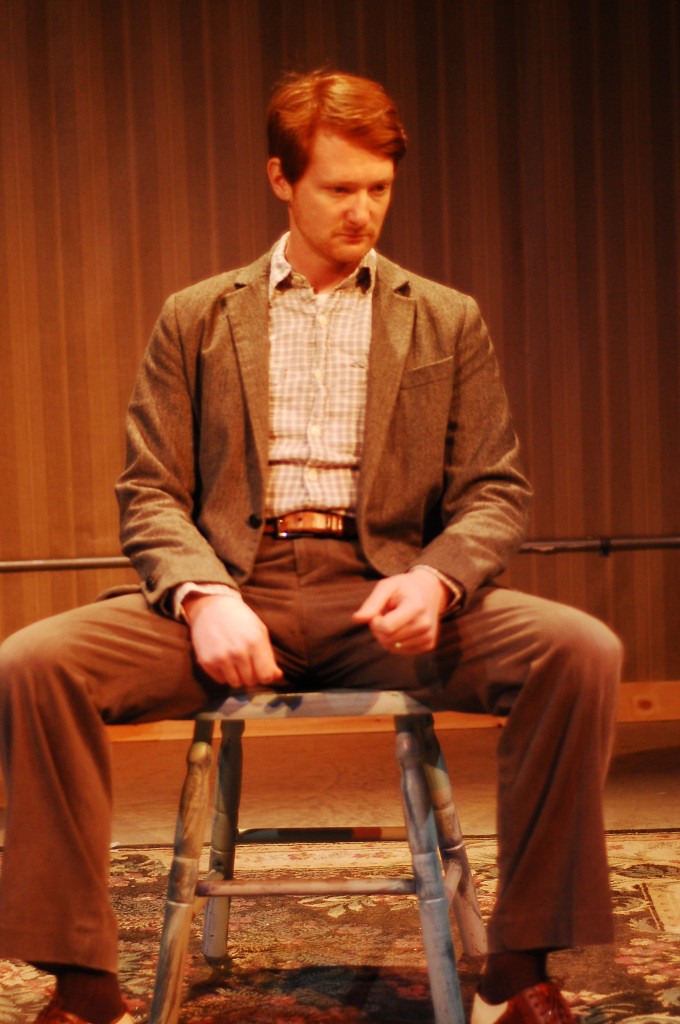 Brian Willetts, waiting for Lefty along with the rest of the New Haven Theatre Company through March 3.

Waiting for Lefty is underestimated. It’s shorthanded as agitprop and propaganda, but it’s more complex and realistic and, well, dramatic than that. It’s direct, sure, but it’s intended for audiences distrustful of highflown rhetoric. Heck, it’s about seeing through the corruption and stalling tactics of leaders who wrongly insist we can trust them.

Waiting for Lefty wears its union label on its sleeve, but the drama here is not about forming a union, it’s about reforming one. A union meeting is held among New York cabbies in the early 1930s. Their well-heeled leaders urging the membership not to strike, to accept their low wages and mistreatment. One of them is named Fatt, straight out of a political cartoon; the slender actor George Kulp here doesn’t match Odets’ description of Fatt as “a fat man of porcine appearance” but he conveys insufferable greed and smugness in other ways.

The other characters in this morality play come off as more contrived than stereotyped. But that’s the joy of the exercise. Clifford Odets—in the piece that cut short his career as a struggling actor and made him an overnight success as a playwright for the American method-acting pioneers at the Group Theatre—lays it on pretty thick. In one of the vignettes in this ingeniously structured show—the meeting dissolves dreamlike into scenes of tense homelife and desperation brought on by the cabbies’ poverty and uncertainty—we meet a scientist who’s being asked, by evil corporate overlords, not just to spy on his colleagues but help them develop a poison gas for warfare—plus his brother was killed in the last war! In another set piece, an impoverished man has nothing left to stand on, including his dignity—and his wife reminds him that there’s nothing to sit on either, as their furniture has just been repossessed. A guy doesn’t just need a job—he’s a newlywed with a baby on the way.

Waiting for Lefty was being called dated as early as 1939, in Harold Clurman’s introduction to an anthology of Odet’s first six plays. Well, it may be more “dated” than Rocket to the Moon, which got an inspired production at the Long Wharf Theatre a few years ago, but is doubtless less dated than Till the Day I Die, the play which Odets wrote as a companion piece to Waiting for Lefty when a move to Broadway beckoned and a longer evening was required.

By that time (June of 1935), Waiting for Lefty was already a community theater phenomenon, and that’s where its legacy lies. All the triumphant ovations came with the play’s small-stage manifestations; Broadway audiences treated it as a curiosity.

The last time I saw it in New Haven, around the time of a Yale strike in the early ‘90s, it was done with a cast of punks at the Tune Inn rock club. Local productions of Waiting for Lefty date back to the show’s very beginnings, when its premiere (as part of a benefit for the League of Workers Theatres in New York) had such an immediate impact that Odets released the performance rights so that community theaters could do it around the country, months before received a full New York production. As Wendy Smith writes in Real Life Drama: The Group Theatre and America, 1931-1940:

It was the most widely performed play in America—and the most widely banned … Although the John Reed Club’s Unity Players won first prize with it at Yale, the production was banned gfrom a New Haven high school auditorium by the School Building Committee of the Board of Education, which found it unfit to be seen in public schools. The New Haven police then turned around an allowed the use of another local school building for a fascist meeting.

I’ve seen Waiting for Lefty three different times in my life, always by itself. It’s a short evening but a full one. New Haven Theatre Company lengthens theirs somewhat by restoring a scene cut from the original show, in which an actor begs a distracted producer for the chance to play a soldier in a new Broadway show. It’s a scene at odds with most of the other pieces in the play because it introduces elements of frivolity and vanity which are at odds with the desperation and distress elsewhere. There’s humor and pathos and suspense and romance and all that good theatrical stuff, but it’s the earthy urgency which provides the momentum, and when the surroundings get slicker that momentum is lost.

Steve Scarpa directs the show—appropriately enough, in a unrented storefront at 118 Court Street, environment of a depressed economy—with a sure organizer’s hand. The cast performs on two distinct platforms—including the audience in the union meeting rabble-rousing, then leaping into a pit behind that stage for the flashbacks. It’s a hardy, sweaty cast, quick with the improvisations while they stand around waiting for somebody to do something. Jeremy Funke and Peter Chenot are particularly good at adding “beleaguered” and “weary” to the general busted-and-downtrodden palette. There are some great fiery roles for women as longsuffering wives and girlfriends (Hallie Martenson gives the most believably indignant performance in the whole cast), though the cross-gender casting of Megan Chenot in the role of a Jewish doctor seems overmuch in this 1930s milieu; too much being discriminated against, even for Odets. 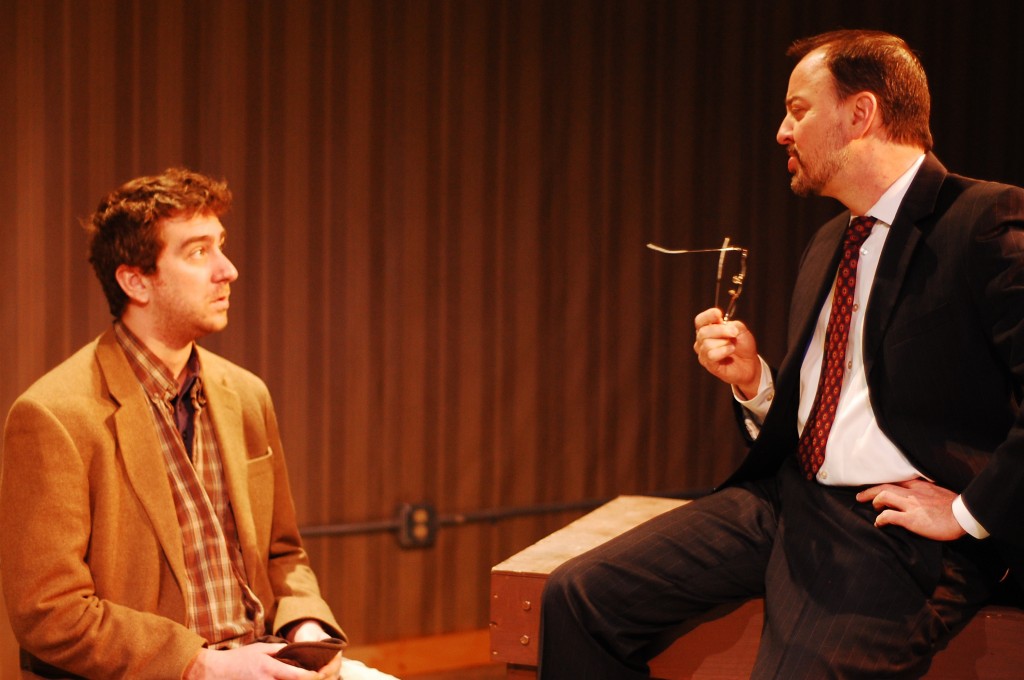 Scarpa smooths the transitions from stage to stage by having a bowler-hatted troubadour, Ben Michalak, strum union songs such as “Joe Hill” and “I’m Stickin’ With the Union” on banjo.

Scarpa also gives himself the plum role of Agate Kelly (a part originated by the unsung Group Theatre stalwart Joe Bromberg), who sums up the show with a call to action.

It rouses, all right. This show only doesn’t work if you overthink it. Just like you shouldn’t overthink doing the right thing, or helping out your fellow workers, or standing up against the greedy and tyrannical and underhanded. The struggling workers wait for Lefty throughout this show. You don’t have to.

4 Responses to The Waiting for Lefty Review