Posted by Christopher Arnott on October 21, 2011 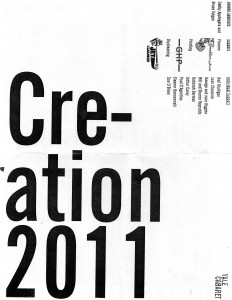 A self-aware five-person mutual musing on time, space, mortality, maturity and musical theater, Creation 2011 at first seems offputtingly vague. The title is in line with what new works are generically labeled at the Festival d’Avignon, and the program cites a 2010 Avignon creation, Massimo Furlan’s 1973, about watching the Eurovision Song Competition on TV as a child, as inspiration.

Yet Creation 2011 disarmingly,charmingly and confidently builds into a focused, provocative and quietly daring piece of self-exploration.

A succession of Yale School of Drama students (most of whom happen to be in the dramaturgy program) share memories of childhood obsessions with certain songs. They sing them boldly and to the best of their abilities, but the quality of the performances is secondary to the needs of the singers to put these songs in the context of their impassioned, impetuous youth. 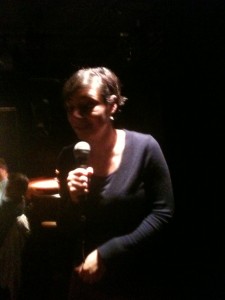 After the late Saturday performance, Sarah Krasnow kindly let me snap iPhone photos of her in poses from her Little Mermaid routine.

Sarah Krasnow sings first, a routine she memorized from The Little Mermaid so completely than she can elaborate on the cartoon heroine’s every hand gesture.

Ilya Khodosh brashly barrels through “I, Don Quixote” from Man of La Manch, then explains how as a boy he responded to the character’s “willful descent into madness.”

Anne Seiwerath’s episode in this exercise, which she sums up dishearteningly as “looking back at something you thought was great when you were young,” begins with a critical examination of a small clay dish made in summer camp, but ends in a recital of one of the more heartstring-tugging ballads from Annie.

A sort of Peter Pan psychologist figure played by Daniel Putnam is on hand to promote an open dialogue about the singers’ needs, and their differing perceptions as children and young adults.

I won’t give away all the elements, but suffice to say this is a cohesive, well-thought-through bit of theater. It doesn’t repeat itself even when it seems like it does. Each new person clutching the microphone on the small stage adds a fresh insight to the growing monologue. The performance style has a purposefully stilted quality, a staginess that comes off more real than if the players (who wrote and developed the show as an ensemble) had gone for a more naturalistic approach.

Though such a sentiment isn’t actually articulated in Creation 2011, it reminded me of the many children and teens I’ve known who’ve had positive experiences in high school or community theater shows, then when exposed to a professional or film version of the show, invariably boast that “ours was better.” Creation 2011 speaks to a higher power than art, a spiritual need to express oneself through unmistakably grand drama.

I consider Creation 2011 to be unusually brave for a Yale Cabaret piece. So many works at that student-run space are intent on leaving childhood behind. It is a place largely reserved for those who think they’ve glimpsed the future of theater and seek to share those insights. Creation 2011 is a fond, vulnerable, fragile look back. It’s a meaningful, intellectual and refreshingly childlike endeavor. It’s easy to sing its praises. 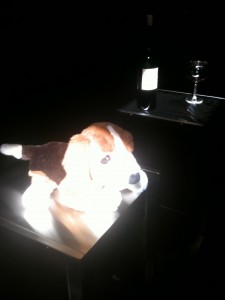 A stuffed dog on a pedestal, representing Sandy from Annie. Admittedly lousy photo by Christopher Arnott.

5 Responses to The Creation 2011 Review