Posted by Christopher Arnott on October 11, 2011

Long Wharf celebrated the glorious middle last Monday night. Tricks in My Pocket … Things Up My Sleeve was a catered feast in honor of Gordon Edelstein’s first decade as the theater’s artistic director. This wasn’t a climax, some “farewell” or “new beginnings” affair. Honored speaker after honored speaker wished Edelstein many more years in his current position. He himself acted as if he had no desire to leave Long Wharf for at least another decade, if not a century. Paula Vogel was the first to say it, and the sentiment was echoed many times during the night: “Here’s to the next ten years.”
This wasn’t an anticlimax, or the cliffhanger ending of a second act. It comes at a peak time in Edelstein’s directing career, with his acclaimed production of Glass Menagerie last year and his continued championing of new works by both established writers (Athol Fugard) and up and comers (the new musical February House this season).Playwright Donald Margulies, whose Shipwrecked and Two Days have been staged at Long Wharf during Edelstein’s reign, gave a toast, suggesting that the director “reached a pinnacle with Glass Menagerie,” that it represented “everything you’ve practiced and preached all these years.”
Nor was it a prologue–Edelstein was Associate Artistic Director under the Long Wharf’ s longest serving artistic director, Arvin Brown, for several years in the 1980s and early ’90s. Brown sent a video greeting for Monday’s party, in which he spoke of his pleasure at seeing Edelstein’s recent production of The Glass Menagerie at L.A’s Mark Taper Forum.
The cast of Glass Menagerie–the Long Wharf cast of Judith Ivey, Keira Keeley and Patch Darragh replete with the Gentleman Caller who couldn’t make the New York transfer with them, Josh Charles (the SportsNight star is now back on TV in The Good Wife)–did a fourfold impersonation of Edelstein laughing, eating and directing.
Film clips from those who couldn’t attend in person included some other impressionists, notably Dael Orlandersmith.
Others were packing anecdotes. Will Ginsberg, president of the Community Foundation for Greater New Haven, revealed he’s known Edelstein since they were teenagers, working as counselors at the same summer camp in 1972; he recalled eating spaghetti with salad dressing in the Edelstein kitchen, and recalled a frantic road trip they took together while leaving out juicy details. “Gordon was hip before being hip was hip,” Ginsberg said, then added “Gordon is fundamentally, unalterably theatrical.”
Paula Vogel had both a recent and a vintage tale to tell–how Edelstein sent her a dirty martini in the bar at the study hotel just the other night, yelling the bartender “maybe I’ll get lucky”; and how, when they were both starving artists in new York city, Vogel and her then girlfriend designated Edelstein “am honorary lesbian” so that he might be granted a sleeping spot on the small bed in their apartment after they’d been up all night talking.
Omar Metwally, who co-starred in the Long Wharf premiere of Sixteeen Wounded, Eliam Kraiem’s bakeshop drama of Israeli/Palestinean relations, recalled how protective he felt of his character, to the point where he went to complain to Edelstein about how a promotional mailing misrepresented the play. Edelstein agreed, and scrapped the mailing, even though thousands of the cards had already been printed. At the same time, Metwally’s even-handed tribute had this punchline, a quote from Edelstein: “Omar—I love you. But I’m not putting Chomsky in the lobby.”
Oskar Eustis, now of course the artistic director of the Public Theater in New York, but who has known Edelstein for decades and was doing co-productions with him when Eustis was running Trinity Rep in Providence, declared that “Gordon’s an amazing artistic director.” More than that, Eustis recalled a trip to Alaska with Edelstein, when neither men were running theaters and had jointly taken a short-term teaching gig in Juneau. The experience, Eustis said, took place during a time of indecision and depression for him. He credited Edelstein’s positive frame of mind as being “not just career-restorative but life-restorative.” 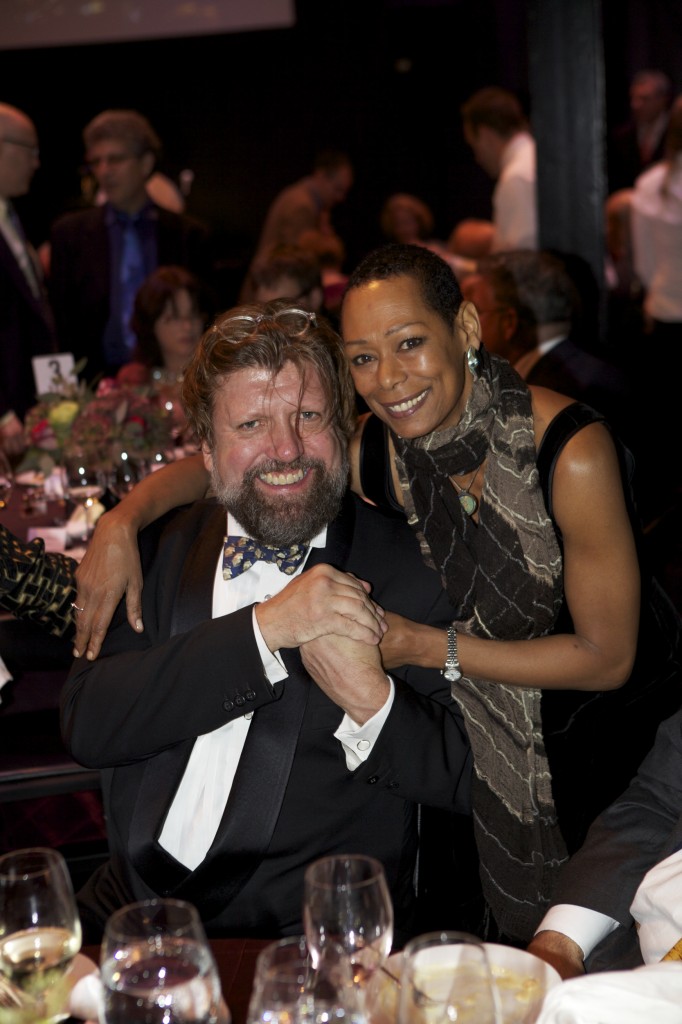 Other encomia came from actress Karen Kandel, playwright Julia Cho (whose BFE and Durango both debuted at Long Wharf) Todd Haimes of the Roundabout Theatre (where Edelstein will be directing Athol Fugard’s The Road to Mecca in December) and Todd London of New Dramatists, a classmate of Edelstein’s at Grinell College in Iowa who vividly remembered a student production of A Midsummer Night’s Dream in which London was Lysander and Edelstein played Francis Flute, the bellows-mender who is pushed into playing the damsel-in-distress Thisbe in a community theater travesty. 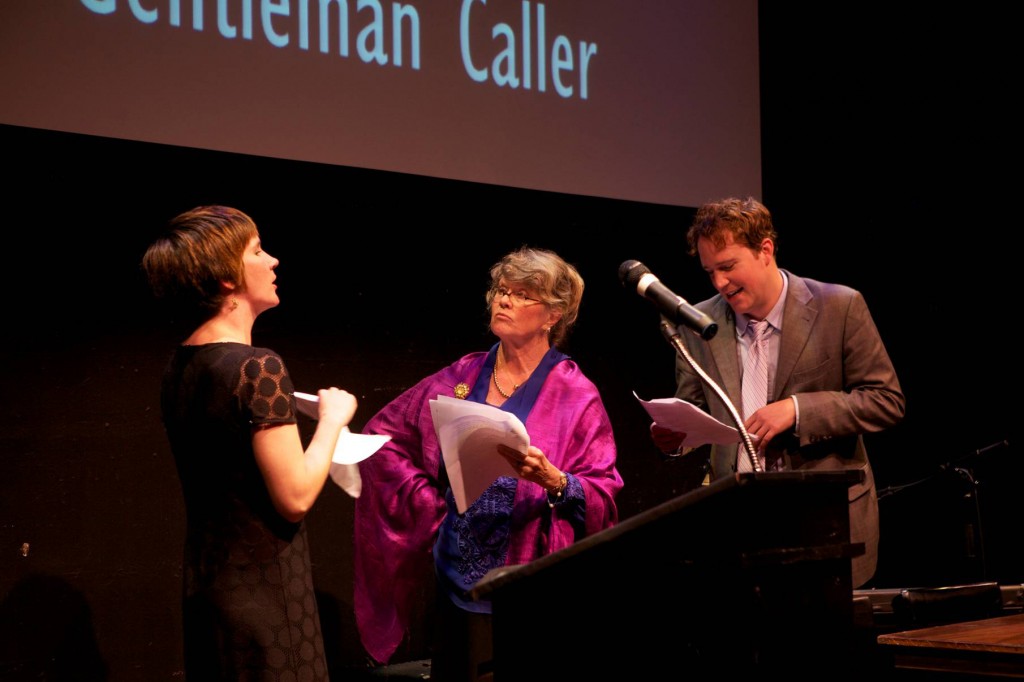 Keira Keeley (who played Laura in the Glass Menagerie at Long Wharf) attempting the role of Amanda while the production's actual Amanda, Judith Ivey, plays Tom. The erstwhile Tom, Patch Darragh, looks on, being Laura. Photo by T. Charles Erickson.

The guest speakers did more than speak: Besides impersonating Edelstein, the Glass Menagerie players honored his eye for casting by demonstrating what it would be like if they’d played each other’s roles, doing a couple of different rounds of the exercise. When Josh Charles joined them onstage, he noted that he’d gotten his Equity Card due to Edelstein casting him in the Stage II production of David Wiltse’s A Dance Lesson in 1989. 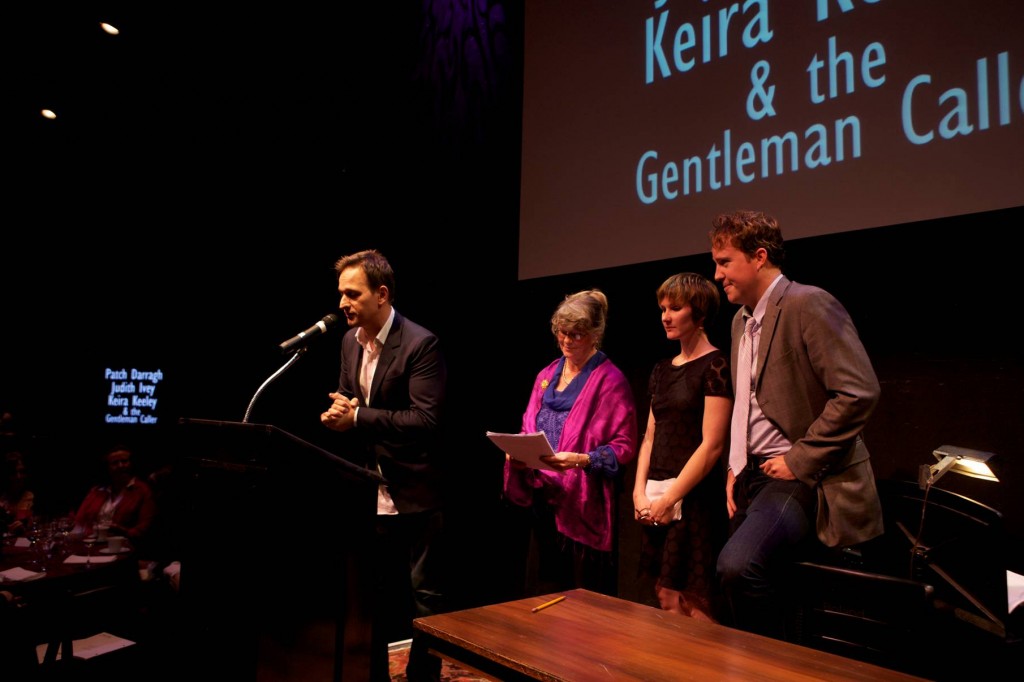 Josh Charles and the cast of Glass Menagerie get serious for a moment. Photo by T. Charles Erickson.

David Shire, composer of Baby and the stage musical of Big premiered “Restaurant Around the Corner,” a song from Table, a work in progress which the Long Wharf longs to stage in a future season. Shire said he and his Table collaborator, New Yorker staff writer Adam Gopnik were “thrilled beyond belief to have out show directed by you in this wonderful theater.” (If Edelstein does direct Table, it will be the first musical he has directed at Long Wharf since the world premiere of Joe Keenan and Brad Ross’ The Times in 1993.) New Haven-based cabaret singer Anne Tofflemire (accompanied by Yale student pianist Daniel Schlossberg) applied the Sondheim song “Putting It Together” (from Sunday in the Park With George) to Edelstein’s work at Long Wharf.
Actor John Procaccino was a fitting master of ceremonies, since he’s as effusive and fun-loving as the guest of honor, and his acting evinces the same passions and varieties as does Edelstein’s directing. Procaccino was directed by Edelstein in the O’Neill tragedy Moon for the Misbegotten and the Dario Fo political farce We Won’t Pay! We Won’t Pay, and more recently appeared at Long Wharf shows in Sylvia and Italian-American Reconciliation (both directed by Eric Ting) and Craig Lucas’ Prayer for My Enemy (directed by Bart Sher). He behaved like his Italian American character, spinning yawned and keeping the mood upbeat, but he had plenty of help from Edelstein’s friends and colleagues. “Gordon creates a loving environment of acceptance,” Procaccino suggested, and the rest of the evening proved the thesis.
The evening was divided into acts. The program book looked like a script. There was no doubt who the hero of the piece was—even when Edelstein’s own children took their turn in the proceedings to toast not Dad but his hard-working Executve Assistant Todd Yocher.
The evening was capped by a touching tribute from the Long Wharf’s Associate Artistic Director Eric Ting, who called Edelstein “one of the bravest men I know,” a leader able to command “an unmatched level of loyalty.” The current chair of the Long Wharf Board of Trustees, alongside three former holders of that post, presented Edelstein with a photo portrait of himself.
Then Edelstein was finally called to the podium. He likened the evening to “Tom Sawyer spying on his own funeral.” He thanked his parents, his brother, his wife of 25 years Joan,  and his children. To his many old friends in the room, he challenged “What say we keep going until we get really old and really fat?” Which was the perfect perspective. This was about momentum, enthusiasm and stability, not about laurels and past glories. Holding the tribute at the very beginning of another strong Long Wharf season showed that. Tricks? Things up his sleeve? No sleight of hand or illusions at all, actually. This is the Gordon Edelstein we’d all come to know, and love. 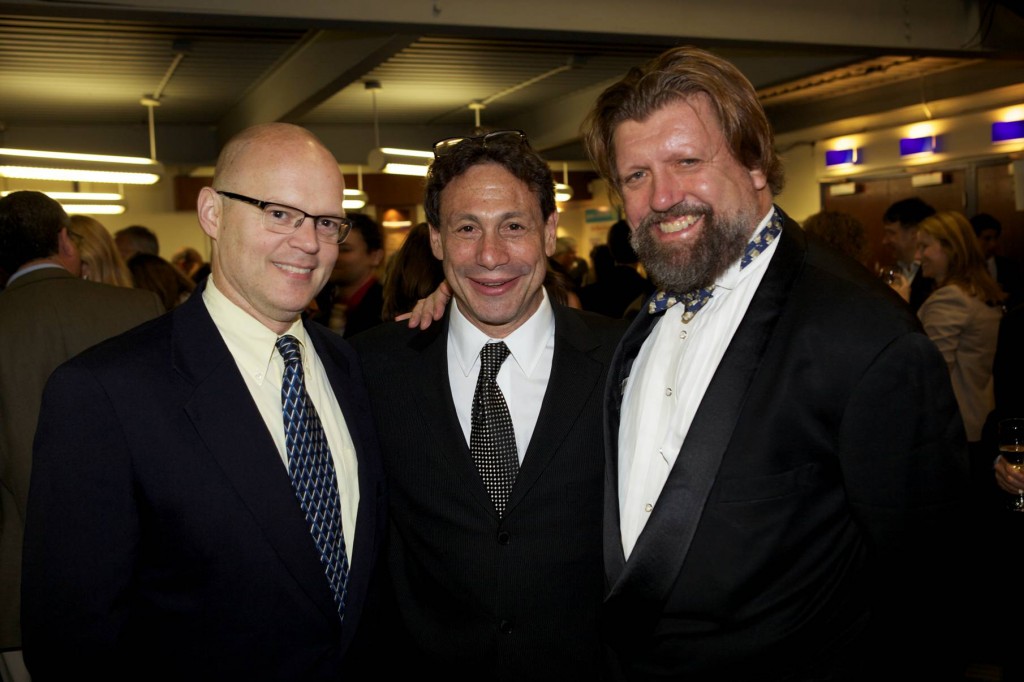