Posted by Christopher Arnott on September 23, 2011 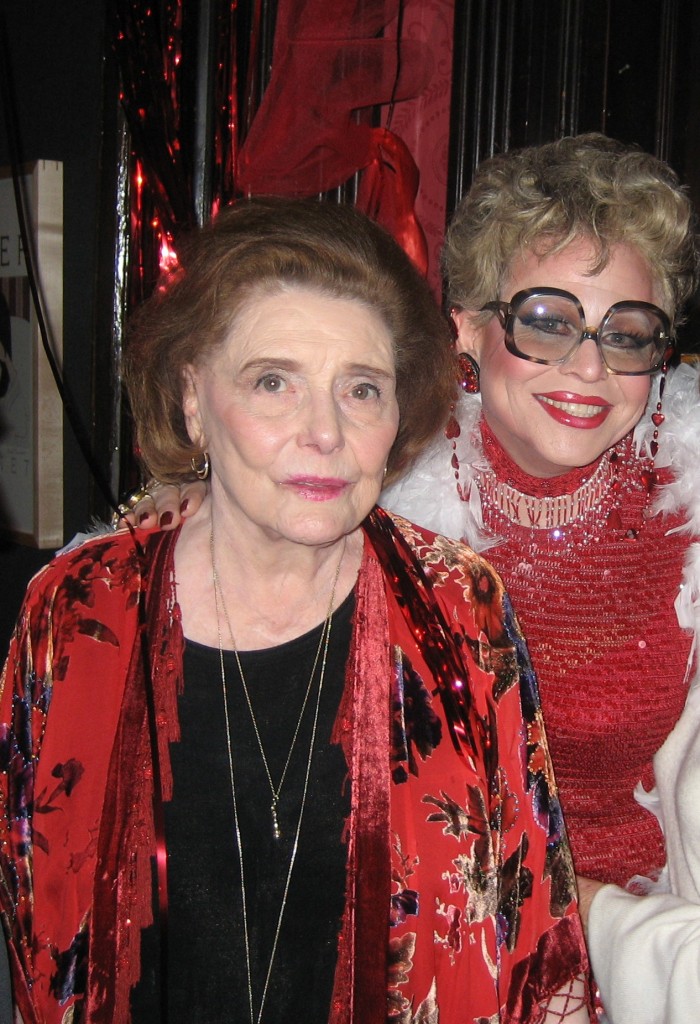 “I first met Sinthea Starr aboard the Theatre Guild ship when Joy Behar was supposed to join us but got snowed in in New York. We had 25 minutes, but needed to get 55 ready, while sailing.
“Sinthea Starr had performed before, a single number. So I had seen her perform at that time. Since then, she’s done a limited run at the Metropolitan Room in New York.”

That’s Joel Vig, whose complicated relationship with a pouty diva resembles that of Barry Humphries and Dame Edna, or Lily Tomlin and Tommy Velour, describing his long and twisted times with the celebrated diva Sinthea Starr.

What does Sinthea Starr do, exactly? She sings a bit, and talks a lot, for about 80 minutes all told, with no intermission. Live piano accompaniment is provided by Chris Muller. “It’s like what Marlene Dietrich did late in life, that sort of autobiographical show, that style of monodeclamation,” Vig riffs.

Starr also dresses spectacularly. “She loves the classic Hollywood look,” her closest friend Vig dishes. “Her favorite designers would be people like Bob Mackie, William Ivey Long. I don’t know what she’ll be wearing in New haven. She’ll be coming there directly from doing an Italian film. She’s flying in early Saturday.” For Vig, it’s a mere train ride from his New York home base.

You can experience the Starr quality for yourself this weekend, when Ms. Starr overruns the lovely Lyric Hall theater on Whalley Ave. in New Haven’s Westville neighborhood for four performances, Saturday and Sunday Sept. 24 & 25 at 5 & 8 p.m. Tickets are $20 in advance—call (203) 361-8089—or $25 at the door.

Sinthea Starr’s Lyric Hall engagement came about after the event’s producer, Bernie Kaufman, saw the diva at a National Arts Club gala. Starr somehow stood out in the midst of a crowd that included Celeste Holm (whom Vig is hopeful will attend one of this weekend’s performances), Tammy Grimes, Gena Rowlands, Anne Jackson, Elizabeth Wilson (an old friend of Vig’s), Rosemary Harris and Anita Gillette—to name only the females there.

Vig (and Starr) have trod the boards in New Haven before. Vig directed a couple of dinner theater shows for Consiglio’s on Wooster Street, and has fond memories of attending try-out runs of Broadway shows at the Shubert Theater back in the ‘60s. He even worked as a technician on a tour of Jesus Christ Superstar which came to the Shubert decades ago.

Starr’s rising star is entwined with the careers of celebrities from the golden age of American stage and film. The Theatre Guild cruises, which the noted New York theater society started in the 1970s, gave fresh and interesting new work opportunities to a host of aging thespians. Vig and Starr became particularly close friends of a frequent Theatre Guild cruise voyager Patricia Neal, who died earlier last August. Vig helped Neal achieve the overdue honor of her own star on the Hollywood Walk of Fame.

Sinthea Starr has yet to get her own star, but she’s had brushes with plenty. It was while visiting the Edward Albee Theater Conference in Alaska with Neal in 2005 that Starr performed for that “Land of the Midnight Sun” state’s governor—no, not THAT one; we’re talking about Frank Murkowski, who served from 2002-2006. Starr does have a comment on Palin, however: “We wear the same size, but have slightly different tastes.”

Vig’s had fame on shore as well as at sea and in the icy 48th state. He was in the original cast of the Broadway musical Hairspray, nightly juggling the roles of the TV studio head, the high school principal, the dress shop owner, a security guard, and the flasher from the opening song. He also understudied several of the other roles. While he never had to go on as Edna Turnblad—both Harvey Feirstein and Michael McKean never missed a performance, he did play Wilbur Turnblad for a few weeks.

So Vig never got to wear the dress in Hairspray. He’ll be living vicariously, then, through Sinthea Starr’s antics this weekend.

One Response to Sinthea Starr Shines on Westville’s Lyric Hall: An Interview with Her Muse Joel Vig