Posted by Christopher Arnott on September 5, 2011 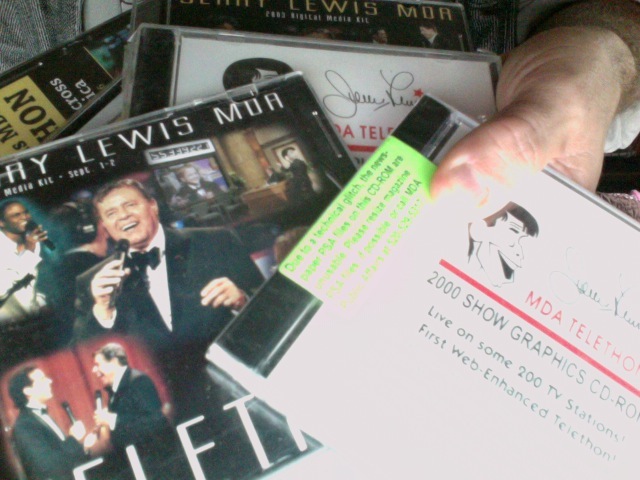 I did a pre-show lament about the MDA no-longer-Jerry-Lewis Telethon yesterday on my other page, www.scribblers.us. Having watched as much as I could stand of last night’s Lewis-starved broadcast, I realized that an even greater loss can be registered.

The Jerry Lewis Telethon was the last bastion of a certain type of TV variety show which was wholly dependent on the mystique of live performance. The odd intros, the use of a large stage and a live audience, and especially the bookings were a welcome throwback to the Ed Sullivan Show, and to vaudeville before that. The show’s bookings leant towards performers with live stage experience: improv comics, stand-ups, ventriloquists, the casts of Broadway shows. Even the bands—country acts, Cheap Trick, Beatles tributes—were generally those who’d built up their reputations as concert attractions.

That wasn’t evident last night. The cameras came in so tight on the hosts that they might as well have been in a closed studio. The intros were perfunctory. Many of the music acts were reliant on backing studio tracks and may even have been lip synching. The old Lewis shows let acts roam free on the vast stage. Last night the performers were reined in.

So losing Jerry Lewis wasn’t all. And that was more than enough to lose. A manic marathon performer long before he entered the telethon game, when Lewis was still a double act with Dean Martin they’d do dozens of live sets a week. When the team broke up, Lewis became a breakneck filmmaker, filming his directorial debut The Bellboy in under a month at a hotel in Florida—while performing in the hotel’s nightclub every night! He was a high artist of the longform entertainment spectacle, whether as host of the 1959 Academy Awards telecast (for which Lewis had to vamp and vamp when the show ran short), in his jam-packed theater tours (just him and a big band) or in his decades as chairman and MC of the MDA show.

Outside of all-night strip clubs or the occasional Eugene O’Neill revival, there are simply no breeding grounds today which build that sort of entertainment stamina. And even when there were, Jerry Lewis stood out as one of the world’s best marathon funnymen.

Frequent shout-outs to the eminent Mr. Lewis, plus a video-clip finale in his honor, only demonstrated the vacuum now at the core of the MDA Telethon. Shortening the show from 20-plus hours was meaningless; it was boring from the get-go, too tightly composed and too earnest to be entertaining.

Nigel Lithgoe made much of having been “passed the torch” by being allowed to sit in Lewis’ chair when Lithgoe co-hosted the overnight shift at last year’s ‘thon. I remember Lithgoe making a big deal of it when it happened last year as well; was he being quietly groomed back then? Probably not—the chair was used by plenty of others, including Norm Crosby. ‘Twas not a throne.

MDA apparently raised a couple million more dollars than it did last year. But since much of that tally was simply acknowledging dollars which had been stuffed in boots and pledged on bits of supermarket cardboard for the entire year since last year’s telethon, that total is hardly a moratorium on Lewis’ service. It could be years before his absence is felt monetarily. Not so the broadcast, however—where were the jokes? The surprises? The bizarre intros and mispronunciations? The sycophantic check-handers, awed to be in Lewis’ presence? Without him on hand, watching the telethon was like watching Damn Yankees without the Devil, or a college without the Nutty Professor. Perhaps they had good cause to replace him (we still don’t know why he left), but they didn’t replace him; they just reenlisted his former sidekicks and sub-hosts.

Life-threatening illness has never been the main attraction. If they could just run that phone number and expect you to call in, they’d do it. There are a slew of reasons, whether selfless or self-serving, to do a telethon.

I direct you to this parody of a children’s primer, from the very first issue of Paul Krassner’s Realist magazine. It holds up just as well as Lewis did all those years.